Share All sharing options for: 55 days to kickoff: Brandon Crawford

Freshman (2013): Crawford played in 8 games as a freshman linebacker recording 7 tackles, 2 TFLs, and a strip sack against San Diego State in the Famous Idaho Potato Bowl.

Sophomore (2014): Crawford played in 10 games as a defensive end with 6 starts. He recorded 19 tackles, 3 TFLs, 3 sacks, two forced fumbles and a fumble recovery.

Outlook: The explosive sack specialist was once thought as UB's Khalil Mack replacement, but since his freshman year he has moved from linebacker to defensive end and he played in spring at defensive tackle. He is up 45 pounds from 2013 and along with Max Perisse, should prove to be a great duo for getting interior pressure on the QB in obvious passing downs. A big question will be Crawford's ability to make tackles as an interior run stopper, although some of those fears were alleviated by UB's ability to stop the UB run game in the Blue and White game.

For 34 minutes and 22 seconds of the game, Army dominated. Army moved the ball for 299 yards during that time and scored 28 points while holding UB to 168 yards, and 3 points. Over the final 26 minutes of the game, UB outgained Army 343-164 and outscored the Cadets 36-19. However, UB could neither stop the triple option nor overcome three Joe Licata interceptions. 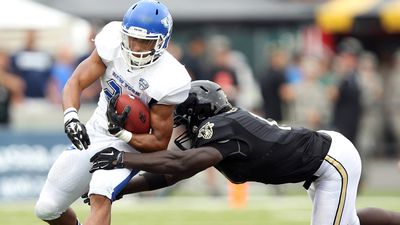 It's now time to ask the hard questions for Buffalo.

Joe Licata threw 50 times for 401 yards, second-highest attempts and yards in his career. His 5 TD passes tied Cliff Scott for 2nd most in a game in UB history. Interestingly, the Army game was the QB's second 400-yard game, but he never at that time had a 300-yard game. The game also continued a trend where too much Licata was not the recipe for a win.