Will "Irish Stout" be the best nickname on roster for years to come?

Outlook: Matt Murphy is another redshirt freshman looking to find playing time. He spent the spring on the second unit.

If you didn't know EMU was a bad team with a rookie coach that struggled to get through inanimate walls, then the 2014 EMU game was a good hard fought UB loss. If you knew what EMU is, it was an embarrassing travesty. Even Danny White, who previously showed little football knowledge knew a 10-point loss to EMU was a point of no return. Although the game hurt, for those who had been waiting for the axe to fall on the head coach, this was the best game of the season. 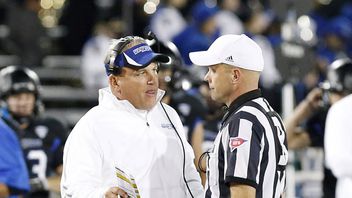 It's time for Danny White to force a change

UB started the game with an 11-play 65-yard drive that ended in a missed 27-yard field goal. UB went up 7-0 on a Marcus McGill TD reception. On UB's next drive, the Bulls could not convert 1st and goal on the 1 and had to settle for a field goal instead. UB went into the half up 10-3, but it probably should have been 21 or 17-3.

EMU scored a TD on their second play of the second half on a 71-yard Reginald Bell TD run. UB blocked the extra point to retain a 10-9 line. UB drove to the 10-yard line, but again settled for a field goal and a 13-9 lead. EMU countered with an 11-play drive down to the UB 1-yard line, but the Eagles were stopped by Adam Redden on 4th and goal on the 1.

UB couldn't move the ball and punted from their own end zone; EMU capitalized on the field position with a TD and their first lead of the game at 16-13. UB flipped the field position, and EMU made a game losing error, a fumble at their own 10. Two plays later, Joe Licata threw it back to EMU, devastating for the Bulls, but they still had the field position. UB forced a punt and got the ball back on the EMU 28-yard line down 3. UB was unfortunately not able to move the ball and instead settled for the game-tying field goal. The field goal was blocked, and four plays later EMU scored a TD to open a 23-13 lead. Devin Campbell fumbled the ensuing kickoff, and 3 plays later, EMU had a 30-13 lead.

UB still the superior team, had time for a comeback and scored two TDs late, but the game was put away when a Licata Interception was converted into another long TD run by EMU's Reginald Bell.

It was fitting Quinn's last game was a quintessential Quinn game:

The defensive scheme was all or nothing, either great play or a long touchdown allowed