74 days to kickoff: Robert Blodgett and a classic MACtion shootout in Toledo

Blodgett moves over a spot to help UB pound the rock

Share All sharing options for: 74 days to kickoff: Robert Blodgett and a classic MACtion shootout in Toledo

Redshirt Freshman (2012): Blodgett played for the scout team but saw no game action.

Outlook: Blodgett has played the role of experienced depth player in his career, but this year he looks to be the day 1 starter at right tackle. At 6'5 307, Blodgett will be especially noticeable as a catalyst for UB's off-tackle run game.

As usual in 2013, UB's offense started slow and surged in the second half. Unusually, UB's defense did not keep UB in the game, it was torched for 31 first half points and 51 total points in a 51-41 MACtion-style loss at Toledo. 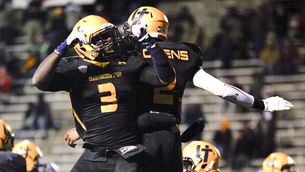 not the end of the world when you learn your QB can throw for 500 yards.

UB's first three drives used thirteen plays including three punts. Toledo countered with fourteen plays and three touchdowns. Late in the 2nd Quarter was normally Khalil Mack time, he often made a big play late to give UB momentum going into the 2nd half. When the UB offense tried to create their own momentum, it blew up in their face. A trick play resulted in a fumble recovered by Toledo on the UB 15-yard line and a 28-0 deficit became a 31-0 deficit.

Despite a reputation for locking on to one receiver, (usually Neutz), Licata targeted 10 receivers and completed passes to 9. Alex Neutz saw 22% of Licata's targets, but he was also the most effective with 15.2 yards gained per target.

The UB defense, aided the rally effort by forcing two consecutive punts and holding Toledo to a field goal, before Toledo's Ricky Pringle scored the game winning points on a 44-yard run that put Toledo up 48-21. The defense allowed 51 points and 551 yards in the loss thatt snapped a 7-game win streak. During the win streak, UB held opponents to an average of 291 yards of offense and only allowed a total of 76 points in those 7 games.