75 days to kickoff: Albert McCoy and the worst loss ever

Share All sharing options for: 75 days to kickoff: Albert McCoy and the worst loss ever

Outlook: In spring, Albert McCoy played right tackle on the 2nd unit. With seniors in the tackle position, it is likely McCoy will preparing to start in 2016, while providing depth in 2015.

Two years prior, Buffalo closed down the Rubber Bowl, defeating Akron in OT, making UB the front-runners for the MAC East title. In 20XX, UB was 2-9 and Akron was 0-11; from the Rubber Bowl to the toilet bowl.

Out With a Whimper 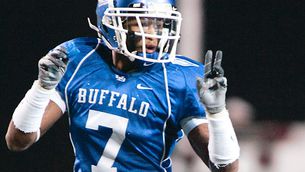 After 25-minutes of poor football, UB made mistakes that Akron turned into points. First a blocked punt led to an Akron TD and on the next drive, a Jerry Davis Interception led to a second TD and a 12-0 halftime lead for Akron.

Akron started the 2nd half with their most impressive drive of the game, only to fumble the ball on the 17-yard line. UB drove down the field and capitalized with a 13-yard Alex Neutz TD catch. Akron however scored on the next drive to extend their lead to 12, 19-7.

UB's defense stiffened with help from Davonte Shannon, who became UB's all-time leader in career tackles during the game. Late in the fourth, down 22-7, UB made it a one-possession game with a second Davis to Neutz TD pass. With 2 minutes remaining, UB recovered an onside kick and Davis found Neutz for a 28 yard reception at the 17-yard line. On 1st and 10 from the 17, Jerry Davis ended the 20XX season in pure 20XX fashion, with a sack and a fumble recovered by Akron.