Will two tight ends be better than one?

Redshirt Freshman (2013): Schreck played 13 games with 4 starts. Schreck burst onto the scene at Columbus where he caught 4 balls for 22 yards on the way to a 17 reception, 147 yard and 2 touchdown season.

Outlook: As the #2 TE, Schreck looks to benefit the most from the Leipold hire. During the Quinn era, TEs seemed to disappear for games at a time, but hopefully that is a thing of the past. Leipold utilizes more two tight-end sets, so there should be a consistent dose of both Schreck and Weiser all year. Schreck caught a TD pass in the spring game which is hopefully a sign of things to come for the junior TE.

Khalil Mack had 8 tackles, three sacks and three forced fumbles as he willed the Bulls through a groggy start and to a school record tying 8th win. In addition, Mack broke the NCAA record for forced fumbles in a career. 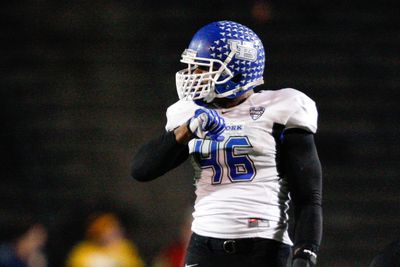 Buffalo's most complete victory of the season.

Up 14-0, Mack forced his second fumble of the day, the first recovered by Buffalo, and Branden Oliver scored on the ensuing drive to put the Bulls up 21-0.

Late in the 2nd quater with Miami near the red zone, Mack strip sacked Austin Gearing and Okoye Houston scooped and scored, pushing the lead to 28-0 and pretty much sealing the game before halftime.

Both Licata and Tony Daniel threw a TD pass and both Anthone Taylor and Branden Oliver ran for 150+ yards as Miami narrowly avoided the shutout at the end of a 44-7 UB victory.