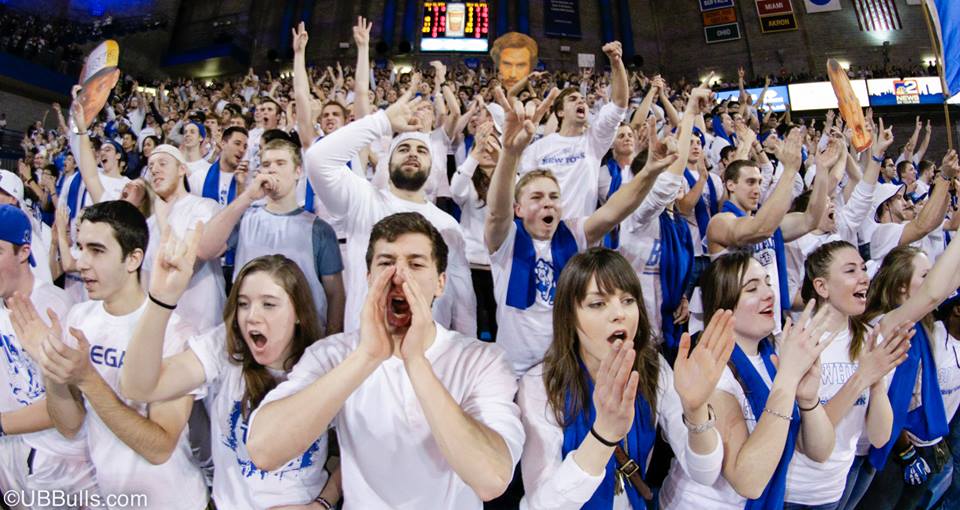 You may be asking yourself why it took so long for a student to write about the game on Friday. Well besides having a busy day yesterday, I was still collecting my thoughts. I sat down to watch the replay for the first time last night and finished at 4am (thank you Daylight Savings). After watching the broadcast and giving myself some time to compose myself, I am finally ready to give you my account.

A lot of you probably noticed the hype of this game on social media, but there was also hype on campus, I would argue the most of all games (even Kent considered). I just now want to say thank you to all of the other True Blue board members and Athletics marketing department for all their hard work for this past game, but also the entire year. Placing flyers in lecture halls in dorm rooms, tabling in the Union and dining halls, and planning promotional ideas and events is a never-ending job.

I went in to flyer Friday morning at 7am and began to write on whiteboards/chalkboards. When writing for the first time there was almost too much to write:

Fast forward to 6:00pm: When I arrive they are ushering students upstairs and there is a line of about ~200 kids already there waiting for the doors to open. At this point I'm a little worried that I won't get my usual spot, but also excited that we could have Kent-esque numbers. They open the doors and everyone rushes in, and I head straight for the front middle and settle in. We then start passing out the True Blue scarves (which went extremely quickly). From about 6:15 until after the game, I didn't sit down or leave in fear of losing my seat. I would say by 6:50 the student section was completely full, so much so that stairs were non-existent and students were being forced to stand around the track.

The senior recognition is always good, but I also noticed that the whiteout worked better than I had expected. I'm sure the free white #UBMopGuy t-shirt helped, but even the general public participated. I'm usually not a huge fan of whiteouts, especially during Buffalo winters when it is very tempting to keep your jacket on, but this one worked.

The True Blue section came out loud, but you could feel the energy waning through the mid 1st half as we were down by 14 at one point. The strange part was for me at least that I never felt worried. I'm usually a realist as well, but there was a large amount of optimism. When Shannon and Will hit their 3's to go on a 15-1 run to end the half, I didn't think that Alumni could get any louder.

Random notes from the first half: Chris Jans and Hurley have a lot of parallels. Both are extremely intense and get fired up during games. There were times when Jans was yelling at the refs and I swear I could see the veins in his neck from the crowd. I'm not saying this is a bad thing, it just leaves me wondering how Hurley is left with a negative reputation around the MAC and I don't see the same for Jans. But that is a discussion for a different day.

When Richaun Holmes was injured, people starting chanting "What a baby." I wasn't too fond of this and tried waving it off. Especially after hearing he had concussion-like symptoms... Lets keep it classy True Blue. I have no problem harassing Treg Setty after the Ohio game, but theres a line there somewhere.

Back to the game: When I was watching the replay, I was trying to pick an MVP and I just could not. Regan, Bearden, Moss, and Evans all have cases. While it was not our best game, this was the most entertaining second half/ending of any Bulls game that I had been in attendance. I'm fairly positive that the final two minutes of the game took a year off of my life due to stress. Worth it.

When Regan hit his final 3, and Bearden made his fade-away game winner, Alumni was the loudest that I have ever heard. This was a "big time" college environment. Looking at pictures, if you asked a neutral party what college this was, I highly doubt you would get UB as the answer. And finally when Henderson was shooting his 1 and 1 following the Wigginton reach-in. Speechless. I didn't come to the University at Buffalo for Division I Athletics, but I had never felt more pride in my university. And then the miss. Henderson is going to remember that shot for a while.

Let me preface the ending of this game by us being told that we COULD NOT rush the court for everyone's safety. Obviously, I was a little bummed, but oh well, its not the NCAA tournament. Following the last BG inbound (where no one touched the ball), Shannon Evans and Justin Moss ran straight into the student section. From my perspective, I saw someone throw the ball sky-high in the air, and then all of a sudden Evans was directly in front of my face. Soon Moss joined the party and everyone was falling on top of each other. My girlfriend somehow ended up beneath Moss's fallen 240 pound body and still has some marks to show from it. I was taking a snapchat of the final play, and continued when Evans and Moss joined the student section. But as everyone was falling, I had to keep a death grip on my phone just to make sure that I didn't lose it. In that process, the video was somehow deleted, which left me extremely disappointed. Shannon Evans was directly in my lap, and I would've had video of it. But it was not meant to be. Also after watching the replay last night there was no good video of the event either. I have also yet to see any 1st person video or pictures. Darn. However, those 30 seconds are the most memorable seconds of my four years at UB. I still smile thinking about it.

Because the game wasn't actually over following that inbound, the ending was actually a little anti-climactic. But it was still perfect in every way. Being a local graduating senior that is moving out of Buffalo in June, this ending was extremely appreciated. I found myself just standing in the bleachers a good 10 minutes after the game was over just taking it all in. This was my last Alumni Arena experience as a student. My last cowbell. My last victory celebration. Obviously this moment was bittersweet, but I wouldn't change a thing. I have immensely enjoyed my time being involved with True Blue, and I will surely miss it. But I can't focus on this too much right now as Cleveland is right around the corner, and I will surely be in attendance.