It's time to go Full NY

Share All sharing options for: Note to UB Athletics and ESPN - Style Matters

Most of us here who write for Bull Run are 100% on board with the New York Bulls Initiative. As involved fans who follow not just UB Athletics but college sports at large we recognize the potential of a state branding for an institution with UB's academic profile. If people start to see UB as "New York's Biggest State School" (which we are) it's a game changer.

So when White redid the floor at Alumni we cheered it. When New York was hastily sewn onto the UB football uniforms last year we defended it, and when the field was done we celebrated it. I think I speak for most of the editors when I say the branding used is not perfect but it gets the job done.

Fans have waited years to see the Athletics Administration take an aggressive posture with the entire state and we are more than willing to overlook some disagreement over the font used or the size of "Buffalo" compared to "New York".

Looks amazing on letterhead and OK on the field / court. It's not an every purpose logo however.  Take a quick peek at ESPN for an arena where you can't use this image. 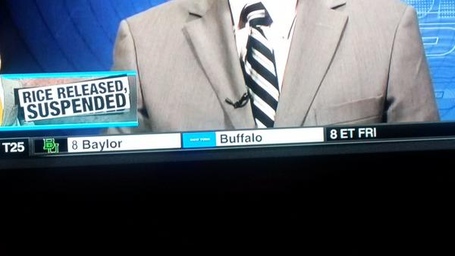 It look like crap when set up as a small box logo on ESPN's score ticker.

I know exactly what it is and unless I'm rocking one of those new giant 4K curve TV's I won't be able to read it.

I want to say again; I love the idea of using the Baylor game and our spot on national television to highlight what we are building, what we aspire to become.

We want our athletic profile to match our academic profile. It can help the school in many ways, not the least of which is advertising and alumni fund raising.

So to be helpful here is an image by our friends over at UBFan.com. It's a picture from their recently created twitter page (welcome to the latter part of the last decade).

Short, simple, to the point, and setup to fit in a square while in keeping with your current branding strategy.

I'd say the guys over at UBFan hit this one out of the park. It hits every element that you have been trying to preserve with the NYBI branding effort and will come across far better in ESPN's layout than the full logo which somebody decided to cram into place last night.

I am sure that due to the MAC's recent deal with ESPN we have some tight ties and can make this change before Friday.

After all which one do you think has a better look? The one above, or this?.