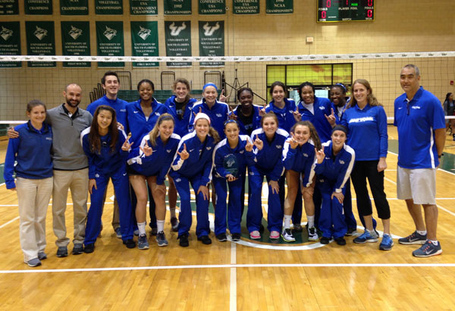 This weekend, the UB Volleyball team competed in the University of South Florida tournament, finished with a record of 2-1, and won the tournament championship. UB is now 4-3 on the season.

In the first game, against the host team, Buffalo fell 3-2 in a thriller. Buffalo led 14-13 in the fifth set, but then USF won the last three points, including a block at the net of UB outside hitter Tahleia Bishop on match point. Buffalo hit .170 for the match, but held USF to approximately the same hitting percentage (.185), indicating how tight the match was.

Sophomore Megan Lin, who was Buffalo's setter the previous weekend, started the match at setter, but late in the first set, junior transfer Marissa Prinzbach took over the setting duties, and would set the rest of the match. It was Prinzbach's first appearance for UB, and she picked up 43 assists. Lin would still play as a defensive specialist for UB, picking up a career high (and team-leading) 21 digs.

Both teams in this contest are nicknamed Bulls, the only two NCAA teams with that nickname.

Buffalo came away with two victories on Saturday, defeating Florida International 3-1 (19 kills for Bishop, 4 others with double-digit kills) and then South Carolina State 3-0 (10 kills for Bishop and freshman middle-blocker Cassie Shado). Buffalo hit 0.252 again FIU and then 0.341 against SC State. Prinzbach would set both matches. Against SC State, UB coach Reed Sunahara sent players who are normally reserves in as starters for the third set, and so now all 13 healthy players on the UB squad have seen court time.

Bishop was named Tournament MVP, while outside hitter Megan Lipski and right-side hitter Sable Staller were named to the All-Tournament Team.