Both of UB's Soccer teams took to the pitch today in Western New York looking to extend their winning ways, after the men topped Bryant Friday night and the women took down Drexel last Sunday.

Somebody, someday, will score on UB's women's soccer team this year. But it hasn't happened yet, including tonight's 2-0 victory over local rival Niagara during which UB saw freshman standout Laura Dougall sustain a scary injury late in the game.

On the men's side, Russell Cicerone and the rest of the team looked to build on their first win of the season, a stunning victory in two overtimes that saw UB erase one-goal deficits early in the first and late in the second half and ultimately win on a stunning midfield goal right at the beginning of the second overtime.

For Stu Riddle and the men, today's 1:00 kickoff against Bucknell was not the most exciting soccer game you'll ever watch. Whether due to heavy legs from the extra minutes on Friday (though it was only ten), or in an attempt to counter something about the Bison, UB came out in a different formation than they have been using early in the season. Instead of topping their attack with speedy forwards Russell Cicerone and Abdulla Al-Kalisy, the Bulls used big-bodied Marcus Hanson front and center, almost as a target forward.

Unfortunately, without Hanson in the middle to help hold the ball, UB's attack was frequently stifled before it ever got going, and the Bulls were further hurt by a large, large gap between their midfielders and forwards. Frequently there were as many as 25 or 30 yards of open space in the middle of the field. The UB strategy, though, did keep Bucknell from raising any significant threats, as well. The first half was largely an exercise in sloppy touches and a frantic, disorganized pace on both ends. Each team had their runs of momentum, but neither created any dangerous chances, either.

The first fifteen minutes of the second half were a different story. UB still didn't dominate the run of play by any means, but did get a handful of high-quality opportunities, especially on a couple of counter attacks. Just moments into the half the Bulls had numbers with Nicolai Berry bringing the ball up on the right side, but he held on for too long without passing the ball more centrally or just taking a shot on net. A couple of crosses from Marcus Hanson also came dangerously close to the Bison net.

But Bucknell would get a goal in the 60th minute, and despite a flurry of UB pressure over the next five minutes or so, the game was effectively over. As frustrating as the UB formation had been earlier in the game, it became apparent that it was a tactical decision to minimize Bucknell's speed on the counter, because the Bison looked more and more dangerous in the final periods of the game. A second goal in the 78th minute iced it for the men in orange, and UB finished the day with a 2-0 loss that didn't really reflect how tightly the Bulls held Bucknell for much of the first two-thirds of the game.

On the weekend, the men went 1-1-0. Waleed Cassis played both games, allowing five goals in 191 minutes, and the goals came from Russell Cicerone (2) and David Enstrom.

The second 2-0 result of the day for UB saw the Bulls with the winning margin, as the women came home from Lewiston with a hard-fought victory over Big 4 rival Niagara. For whatever reason, the game started early and I missed about the first 12 minutes of a scoreless opening half. 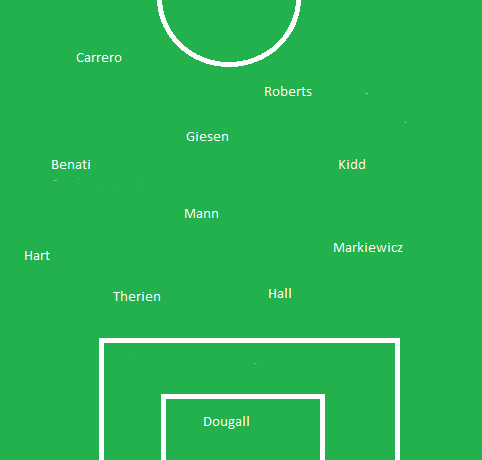 This game was a classic example of a better team wearing down its opponent. The first half was relatively back and forth, but UB clearly had the better of possession, and keeper Laura Dougall was barely tested at all. Both teams made inroads into the other's territory, but UB's chances were just a smidgen better, as they continually built the attack up through the left side from defenders Sophie Therien and Angel Hart to midfielder Julia Benati

Things really began to go UB's way after Coach Shawn Burke's customary mid-first half subs hit the field and changed the shape of the offense. Megan Abman and Alex Lambert replaced Roberts and Carrero up front and immediately began finding space. A dangerous cross nearly found Abman's forehead and the back of the net, and UB punched the resulting loose ball just over the Niagara goal. A few minutes later another excellent cross was headed over the bar.

Abman was able to find all sorts of space in the Purple Eagle backline and to effectively hold up the ball while reinforcements came upfield. Instead of diffusing UB attacks and sending it back to Buffalo midfield possession, Niagara couldn't stop possession in their own end and the Bulls enjoyed twenty good minutes of momentum and pressure, culminating in a pair of free kicks late in the half, one of which saw a goal that was waved off by some mystery UB foul. (UB's page is calling it offsides, and it might have been, but I don't think so. It was a different arm motion from the ref.)

In the early going of the second half it certainly looked like UB's inability to score with all their earlier possession and pressure would come back to bite them, as Niagara came out strong and UB started to rush touches and lose possession more easily. Dana Lytle, surprisingly playing at forward, was booked after an aggressive challenge and had to be subbed off.

For ten or fifteen minutes, UB's game was categorized by two things and two things only: Sophie Therien serving as an absolute wrecking ball on all dangerous Niagara attacks, and the referee and line judges calling offsides on nearly every chance for both sides. Therien was an unsung hero of this game, frequently stepping in front of a Niagara pass and taking the ball singlehandedly into the midfield and out of danger. Meanwhile, every time Buffalo got the ball into the teeth of the Niagara defense, the flag went up. It was frustrating, to say the least.

In the 62nd minute, UB was finally able to gain the momentum when Julia Benati, a freshman midfielder who never loses a step of her high energy for 90 minutes, earned a free kick far away from the Niagara net. Therien stepped up and served an incredible outswinger to the box that found Jackie Hall's head and the back of the net.

From that point on, UB would own the momentum for 15 minutes, bringing the game into the late stages. Niagara's desperation turned a chippy game into a dangerous, scary moment for everyone. Laura Dougall, who had truthfully not needed to do much on the night, jumped high into the air to snag a bouncing ball that came into the box as the Purple Eagles charged. As she caught the ball and started to come back down, she was undercut by a Niagara forward, flipped, and landed hard on her upper body.

It was a dangerous, dangerous play that frankly should have never happened. I don't think it was intentional, but this wasn't a worst case scenario collision of two players going for a loose ball. Dougall had it in her grasp at the height of her leap and was coming down when the Niagara forward slammed into her legs.

I was unsure what exactly the keeper had injured at first, but UB immediately brought a cart and a number of trainers onto the pitch. Frankly, given the way Dougall landed, I was shocked to see her get onto a cart without a stabilizing backboard and able to put weight on both her legs. It was that scary. The freshmen was replaced by Ashley Evans and stayed on the sideline for the final 15 minutes of the match.

I and the rest of the UB fans in attendance were also shocked to see the Niagara player only earn a yellow. After all the confusing offsides and a lot of chippiness, this was just the icing on the cake for a frustrating referee situation. The rest of the game felt inconsequential, and didn't really matter, especially after Celina Carrero, who is nearly unguardable on the dribble, scored a second goal in the 84th minutes.

Of course, UB once again did not allow a goal. The Bulls' shutout streak now stands at 470 minutes over 5 games, a program record to start a season and the second-longest such streak in team history. The streak will be tested on Friday, when UB travels to face nationally-ranked ACC member Virginia Tech.