Men's soccer enjoys a homecoming and their first win of the 2014 season thanks to two goals from Russell Cicerone and a little extra time out on the pitch.

Share All sharing options for: Bulls Come from behind Twice to Top Bryant 3-2 in 2OT

The Bulls Men's Soccer team had a disappointing opening weekend out in California, and for 60 frustrating seconds it looked like that malaise would extend at least a few days. Despite a number of high-quality chances and clear advantage over the visiting Bryant Bulldogs, UB conceded a goal in the 88th minute that put them down 2-1, staring their third straight loss to open the season.

Unbelievably, UB potted a goal less than a minute later when a messy chance in the Bryant box found Nicolai Berry and then David Enstrom, and THEN the back of the net for the 2-2 tie. UB's next goal, and first lead, would come about 10 minutes of gameplay later, but first let's catch up: 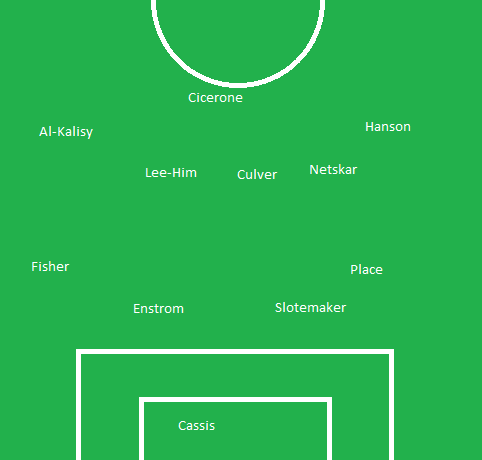 In the early going the game was excessively back and forth. Unlike past matches, where possession got muddled in the middle of the field, UB and Bryant traded haymakers, probing deep into the other's territory and threatening the goal. That said, the opening score from Bryant in the 12th minute came a bit out of nowhere on a broken play.

I barely had time to tweet out the updated score, however, before Sophomore Russell Cicerone took the ball of the restart and curled in a shot, upper 90, from outside the penalty box. In less than a minute, UB had tied the game at 1. From that point on, the Bulls controlled the game and continually threatened for more goals. Cicerone and Al-Kalisy shook off momentary injuries to press for possession deep in Bryant territory.

That high pressure is quickly becoming a staple of the UB style of play. For the final 30 minutes of the first half, the Bulls generated several high quality chances off their speed and pressure, to the tune of a 9-5 advantage in shots at the break. Even better for Buffalo, several players other than Cicerone and Al-Kalisy threatened to score. Nicolay Netskar popped one over the top the net, and Marcus Hanson had a number of dangerous crosses that just missed their mark or were misplayed by inches. UB could have easily enjoyed a 3-1 lead at the break.

Out of halftime, Bryant was able to put a little more pressure on the Bulls midfield and keep them from dominating possession as they had in the first. That said, the Bulldogs did not have many quality scoring chances and UB was still able to get theirs, especially on the strength of their speed and the counterattack.

Shortly after the sixtieth minute the game was halted due to lightning, and I, ten miles away from my North Tonawanda home and dependent on my bicycle to get me to and from campus, decided to play it as safe as you can when you're booking it at 19 miles per hour on the lightless Ellicott Creek Bike Paths and get home before the front rolled in. I'm happy to report that I made it about 15 minutes before the rain, despite seeing lightning on the horizon the whole way home.

Anyway, apparently it's not a 30 minute delay for lightning in soccer as it is in football, and the game had restarted before I made it home. In the 88th minute, disaster struck, as Bryant was able to net a go-ahead goal, and was only two minutes away from frankly a steal of a win.

Bryant scores in the 88th minute to rob @BullsMensSoccer of a draw, unless there's another lightning response up the Bulls' sleeves. 2-1

Incredibly, after scoring within a minute of the Bulldogs' goal in the first half, UB did it again in the second half, apparently completely unfazed by the lateness of the score.

THERE IS! UNBULLIEVABLE. @BullsMensSoccer ties it up on a hoal from Enstrom. Assist to Berry.

Frankly, UB was unlucky not to win the game in the 90 or so seconds they had left, with two chances in the Bryant box that were just a bounce from entering the net.

Lessons learned so far: UB is awesome immediately after conceding a goal.

Collegiate Soccer makes use of the Golden Goal, sudden-death format, which is both wonderful and heart-stopping at the same time. For UB the first ten minute overtime looked very similar to that stretch in the first half, with the Bulls in control and pressing for a goal that would end it. That said, goalie Waleed Cassis was forced to make some impressive saves during the period.

As I was typing that Cassis pushed a dangerous shot over the bar. I rest my case.

After that, well, that's when lightning struck. Am I overdoing it with the lightning? Perhaps. But this was deserving. Bryant never touched the ball in the second overtime. And just like UB's first goal, when Bryant gave up a 1-0 lead before they had a chance to gain possessions, it was Cicerone again.

@BullsMensSoccer wins on a 60 yard wonderstrike from Cicerone to open the second OT period. I will do unholy things for video of that goal

Sorry to go overboard on the twitter embeds, but it was really that stunning. Watch it in all its glory here.

@shakirsimpson God bro... Honestly that's the only answer I have

UB next plays Sunday afternoon at 1 PM against Bucknell, looking to even their record at 2-2-0. Go Bulls!