In the last weekend of September, UB's Women's Soccer team started MAC play by returning to their winning ways on the back of two shutouts, while Men's Soccer dropped a road match to the Cornell Big Red in Ithaca.

I missed my usual soccer roundup last week, and then caught no UB action over the weekend, so it's been a little bit for Bull Run's Olympic coverage. The men dropped a match to Cornell that was more lopsided on the scoreboard than on the pitch, while the women returned to their winning ways in two conference matchups in Ohio.

After a number of single-game weekends, and a tough loss to Cornell, Women's Soccer (MR 99) opened MAC play with two wins - and even better, two more shutouts for Laura Dougall - after a pair of losses to Virginia Tech and Cornell. In addition to Dougall's return

On Friday night, the Bulls traveled to Kent State (MR 135) to start conference play on the road and used a ninth-minute goal from Katie Roberts and an additional score from Celina Carrero to stake a 2-0 lead that they wouldn't relinquish.

Things were dicier against Ohio (MR 188) on Sunday afternoon. Once again on the road, it took the Bulls 109 minutes to score, but thanks to Katie Roberts - once again - with just minutes left in the second overtime and yet another shutout from Laura Dougall, UB took another MAC game on the road from the Ohio Bobcats, 1-0.

To wrap that up - that's two shutouts from Dougall, and two game-winning goals from Roberts, with an insurance strike from Celina Carrero for good measure. Add it all up and the Bulls are 2-0 in the MAC for the first time since 2001. Obviously, they sit in first place early in the young season.

Dougall and especially Roberts received a good amount of recognition after this weekend; Dougall getting some love from Canadian press as she continues to excel in her inaugural season, and Roberts from both her school and her conference:

Taylor And Roberts Named Athletes of the Week - Buffalo

Circling back to a focus on the team, all the superlatives I've been using for the last few weeks are proving to be more than early-season hype. I mentioned earlier that UB hasn't been 2-0 in the MAC since 2-0, and the Bulls already have to their credit this season a program-record shutout streak that started the season before ending in the loss to Virginia Tech. All that said, take a look at the current NCAA RPI rankings: 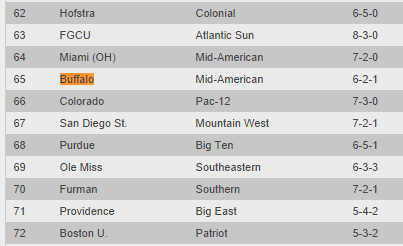 I extended my selection down to include two schools I don't like. Hope you don't mind. The focus here, though, is that 65 is pretty good. It's a little more than 30 spots above the Bulls' rank in the Massey Ratings, and is in fact the highest ranking in program history.

I doubt many people have been hanging on this, but I need to butt in with a piece of editorial here. At the time of Shawn Burke's hiring, I wrote this on Danny White's decision:

This is an apparent change in direction from many of Danny White's previous hires. In many of his coaching changes, White appeals to the fact that UB should be striving for more than it is getting, and his hires reflect that. Trina Peel, Bobby Hurley, Stu Riddle, and Felisha Legette-Jack all came with big-time playing experience, and coaching experience from outside of Buffalo.

In a later post, I openly wondered if Coach Burke would be more of the same after Michael Thomas' final season see a punchless offense let down a stellar defense. It's now apparent that there was nothing to worry about. The Bulls' play this year has been stellar and beyond my best-case projection had I published it in August. This team is really good, Burke has them clicking on all cylinders, and the rest of the season should be really, really fun to watch.

Katie Roberts has now scored in three straight games and leads the Bulls in goals (4), assists (2), points (10), shots (30), shots on goal (15) and game-winning goals (3). You could do worse, I suppose. Celina Carrero is second on the team with three goals.

In net, Dougall moved past her first goals against of the season in the Cornell match to increase her shutout total to six, which is already tied for fourth in the UB single-season record books. Add in the shutout that she and Ashley Evans shared up in Lewiston, and it's seven in

The team as a whole has made a living out of a lock-down backline and growing momentum in the second half. These two calling cards combine to help the Bulls enjoy a huge advantage in shots taken over their opponents: by 30% over the whole game and nearly 50% in the second half.

After a weekend in Ohio, the Bulls return home for a double feature at Alumni Stadium: hosting Bowling Green (MR 296) on Friday night and Eastern Michigan (MR 45) on Sunday afternoon. The Falcons are flat-out terrible, while EMU may very well be the class of the conference, with a top-50 ranking in both the NCAA RPI and the Massey Ratings.

Bull Run (aka me) will have live coverage of both games this weekend.

After several consecutive two-game weekends, the Men's Soccer (MR 185) schedule finally lightens up for the Bulls, who played just one game this past weekend and only play once more before opening their short MAC schedule on October 10th against Western Michigan. In this weekend's match, however, UB dropped their contest against Cornell 5-0.

Cornell scored all five goals on just five shots on net. In most other stats that less directly contribute to winning and losing, UB stacked up favorably to the Big Red - more favorably than 5-0 in goals, at least - but unfortunately goals is all that matters.

I missed the Soccer Roundup last week, but did get a writeup of the Bulls' win over Detroit to kick off that weekend:

In UB's other game since the last roundup, they lost 3-0 on the road to Duquesne. We don't want to talk about that one much, especially nine days after the fact.

UB's only stats to speak of since the last roundup come from the 3-2 victory over the Titans. The goals in that match came from Marcus Hanson, Russell Cicerone (PK), and Kristian Lee-Him. Russell Cicerone remains the only Bull with more than one score, leading the team with four.

On the other end, the Bulls have given up 10 goals in three games, and yea, we won't talk about that too much either for now.

As I mentioned above, there's just a single match in the next week and a half for UB, one that should be an easy tune-up before MAC play as UB takes on Houghton College, a Division III opponent.

I've been finding this roundup posts just a little long, and I'd like to provide more in-depth discussion of action in the rest of the conference. Starting next week. I'm going to have a dedicated post just to Olympic Sports around the MAC. This way, I can spread the stuff I want to cover in a way that makes it easier to keep from petering out at the end of posts, and I can lure those of you who only read one or two sports into catching more words about the rest of UB's offering. Cheers!