Share All sharing options for: Buffalo Bulls Non conference 2014 - Offenese Looking Good, Defense Not so much..

Buffalo entered this season as a program facing some very serious questions. After four weeks some of those questions have been answered but others have not. Who are the 2014 Buffalo Bulls and can they give the school consecutive winning seasons at College football's highest level since the glory days of the 1960's.

One question people were asking this summer was "Who will Joe Licata throw to with Alex Neutz and Fred Lee graduating?". The answer is.... Everyone! 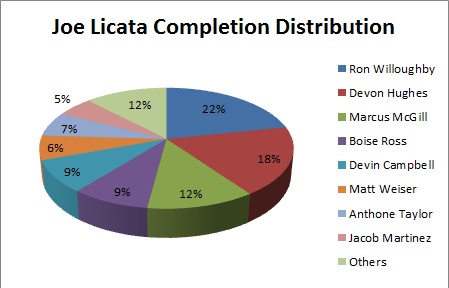 About two out of every five completed passes ends up in the hands of Ron Willoughby or Devon Hughes. Right now the two players are splitting the work pretty evenly between them. The other starting receiver, Marcus McGill is catching 12% of the passes while four more players are catching between 5 and 10% of the receptions.

A second question on offense was the running game. Could anyone, or any combination of players step in for Branden Oliver?

So far the answer is not quite. There is potential and there is certainly enough pop in the UB backfield to manage our conference schedule. Taylor runs a similar style as Oliver and Jordan Johnson shows a ton of potential. When Devin Campbell is healthy, and used, he is also a fairly dangerous weapon.

The offense still has it's problems playing a 60 minute game but on balance even without BO and Neutz the team is not too far off where they were last season.

The questions that remain unanswered are on the defensive side of the ball. But the question I'm wracking my brain with has nothing to do with Khalil Mack...

It turns out losing Khalil Mack was not the worst thing to happen to Buffalo. Losing Najja Johnson, Derek Brim, and Okoye Houston seems to have destroyed Buffalo's secondary. Will the secondary settle in? Can they be effective with this scheme?

Some of the problems look schematic but where last year there was the experience to  mostly compensate compensate for isolated defenders this year UB's secondary is getting picked on regularly. Army, Baylor, and even Dusquene and Norfolk State all managed to burn UB for a long touchdown strike. In the case of Norfolk it was only once but Army and Dusquense did it multiple times, sometimes with the very same play.

So that's the big question for the remainder of UB's schedule. Can this team get the 5 conference needed to go bowling? It's certainly possible with UB's offense but with their defense will the Bulls be able to trade punches with CMU? With Bowling Green, Ohio, or Akron?

Before we overlook Miami let's not forget that the RedHawks put a scare into Cincinnati. Miami was on the one yard line trying to tie the game late in the 4th quarter. As much as they might be the "weakest" MAC team left on our schedule they are no "give me".

The Bulls can not choke away a game to a team they should beat. Miami, UMass, Kent, and Eastern Michigan can get Jeff Quinn within one game of his second winning season. Then UB would needs only to steal one from Bowling Green, Ohio, Central Michigan, or Akron.

This Saturday the quest starts. Can Jeff Quinn do what Turner Gill failed to do? Can UB put together winning seasons?