Stu Riddle's Bulls finished off their exhibition slate with a 2-0 win over the University of Rochester Yellow Jackets. With three exhibition games - and a 14-0 goal differential - under their belt, UB gets the season started with a pair of games next weekend in San Diego.

If their preseason is any indication, the UB Men's Soccer team looks to be in pretty good shape for the 2014 season. After 7-0 and 5-0 wins against decidedly lesser competition, the Bulls kept the ball rolling tonight against the University of Rochester Yellow Jackets with a 2-0 victory.

Rochester is by most accounts a top-5 team in all of Division III, and they came to play tonight. Playing a physical, high energy game with a high defensive line, Rochester was able to win a lot of 50-50 balls and keep the pressure on the UB defense for long stretches in the first half. Though the difference between the teams wasn't significant, UB went into the break on their heels a bit, able to possess and move the ball but unable to get the same quality chances that the Yellow Jackets were managing. 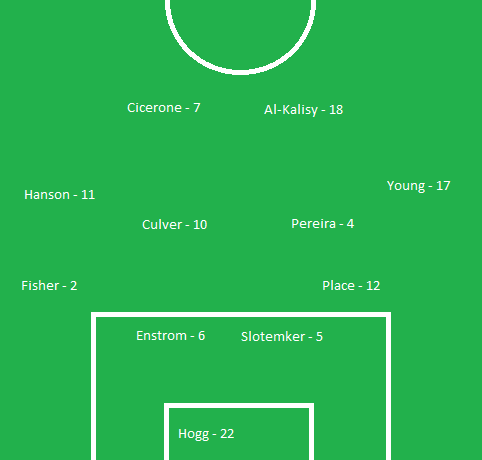 UB played much of the game in a standard 4-4-2 formation, with forwards Abdulla Al-Kalisy and Russell Cicerone commanding attention up top and wings Marcus Hanson and Sean Young moving up without much hesitation. For much of the first half, however, UB was only able to generate offense from long balls over the top of the Rochester midfield, which continually won 50-50 balls and pressed into the UB side. While the teams were relatively even in possession, Rochester was able to generate a lot more pressure deep in UB's end than the Bulls were able to counter with.

UR holds a top-5 ranking in all of D3, and it shows. They've already beat Bona this preseason and are controlling play against UB. 30'

At the same time, UB's defense held thanks to an extremely vocal back line. While the men don't quite have the shutdown power the women exhibited Friday evening, freshman goalie Cameron Hogg was loud and audible to the entire stadium for the entire half, directing not only his backline but even the midfielders and Cicerone and Al-Kalisy up top.

In truth, Hogg was only forced to make one especially difficult save in the first half, despite the Rochester pressure, when in the 25th minutes the Yellow Jackets earned a corner and the freshman from New Zealand pushed the shot over the bar. In the 37th minute the Yellow Jackets got another clear chance on net but rocketed a shot over the bar. UB did manage some momentum at the end of the half, as sophomore Russell Cicerone earned two corner kicks and a free kick himself in the final five minutes.

0 0 at the half for @BullsMensSoccer in their exhibition v Rochester. UB slowly built more momentum through the half.

There's no other way to put it: UB came out of the second half like gangbusters. Just moments after the break, junior Marcus Hanson sent in a cross that Fox Slotemaker was able to head down for Austin Place to punch in.

While UB stepped it up coming out of the break, both teams were playing at a higher pace in the first ten minutes out of the break, For UB, that meant much higher pressure on Rochester's defense and more precise play in the midfield, while Rochester was able to capitalize on the space between Buffalo's midfielders and backlines and spring some breakaways early on. Waleed Cassis, who replaced Hogg in net, made two key saves in the 51st and 52nd minutes. On the night, Rochester outshot the Bulls by a wide, wide margin and had a half dozen high-quality chances, but couldn't manage to get one into the Bull's net.

Just as it looked like UR was going to capitalize on the Bulls' D, however, Buffalo was able to strike again. Once again Slotemaker was able to head down a cross, and once again Austin Place put it in the back of the net. There were still 25 minutes to play, but the rest of the game passed pretty quickly. Rochester naturally turned up the pressure, but a series of subs in UB's midfield progressively strengthened the defense and Rochester was unable to score in the last 20 minutes despite a number of corner kicks.

in the end, the 2-0 victory means an undefeated and unscored-upon preseason for the Bulls, who roll full steam ahead into the regular season next Friday in San Diego.