The season opener for both Women's Soccer and all of UB sports saw a number of firsts as the Bulls downed St. Bonaventure 1-0 at UB Stadium to start things off on the right foot.

The Women's Soccer team got the year started on the right foot with their 1-0 win over St. Bonaventure today at UB Stadium, bolstered by a goal from freshman Julia Benati and a shutout from freshman goalkeeper Laura Dougall. The win also marked the first in new coach Shawn Burke's career.

Given all the firsts on the night, a number of things stayed the same for the Bulls from last year. The team was driven by the midfield combo of senior Megan Giesen and sophomore Andrea Niper, and Coach Burke's signature defense from seasons past was apparent even now that Burke is overseeing the entire team and breaking in a new goalie now that Ainsley Wheldon has moved on to greener pastures.

Just as they did last year, UB struggled to punch the ball in the net, but were buzzing around St. Bonaventure's box for much of the game, and finished with nearly a dozen shots on target. In the end, it only takes one to win, and UB got that one.

Coach Burke's opening lineup featured an even mix of upperclassmen and younger contributors, with seniors down the middle of the formation in forward Katie Roberts, defensive midfielder Courtney Mann, and fullback Sophie Therien. 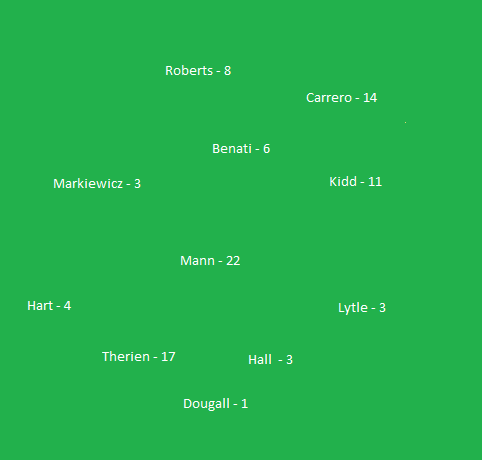 The formation looks pretty similar to the 4-4-2 with a midfield diamond that the US Men's National Team has started using under Jurgen Klinsmann, but in practice defensive mid Courtney Mann and winger Kristin Markiewicz collapsed to the back line rather quickly when St. Bonaventure got the ball. In the early going, this was most of play, as the Bonnies controlled possession and often took advantage of UB miscues.

There's not really another word for it than sloppy. In the first 20 minutes UB's midfielders struggled to control the ball with their first touch, struggled to time their runs on the outside, and tried too often to move the ball upfield with a single, long pass that was ultimately intercepted by a woman in brown. UB did manage an early corner kick, but for the most part the early going saw lots of Bonaventure jerseys scooping up loose balls.

Freshman Laura Dougall gets the start for UB. The Pickering, ON native had a standout prep career in Canada and steps right in as starter.

Given all that, though, none of the offending shots were much trouble for the freshman Dougall. For all the UB miscues, Bonaventure was unable to get anything of a dangerous counterattack going, thanks to the UB backline that swelled to 6 across when Mann and Markiewicz dropped down.

The run of play changed dramatically with a series of substitutions in the middle of the first half. Sophomore right back Dana Lytle went down with an ankle injury that was bad enough that she needed to be carried of the field, and Coach Burke sent in senior Megan Giesen and sophomore Andrea Niper for Markiewicz and forward Celina Carrero. The immediate effect was a calmer, more precise midfield that controlled the ball well before it made it to the back line. 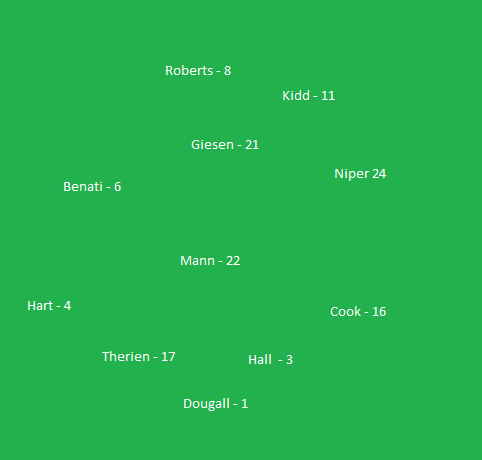 The senior Giesen slotted into the attacking-mid 'point' of the diamond, pushing freshman Julie Benati to the left wing, while Niper slotted in on right wing and pushed junior Kassidy Kidd up into Carrero's spot.

The effect on the pace and run of play in the game was immediate. Suddenly Mann wasn't dropping as low into the defensive line, and Giesen was playing keep-away with her Bonnies counterparts. Together the two linked up with the aggressive Niper to get a number of chances up the right side. A free kick in the 35th minute just missed over the bar, and UB was able to threaten from the left side when Benati corralled a loose ball, and, trying to send it to Kidd in the middle, was thwarted by a sprawling effort from Bonaventure keeper Christina Sarokon. Benati would notch UB's best chance of the half with a thunderous attempt from 25 yards out in the 41st minute that rattled off the crossbar and Sarokon's shoulder.

All told in the first half UB took twenty minutes to get its footing, and then continually pressured the opposing mids, working the ball up the middle and getting offense from its wings in Benati and Niper. Bonaventure had no shots in the final 25 minutes of the half.

The second half was more of the same. Featuring the same lineup from before the break, Giesen punched a great Niper cross over the bar at 49', and a looong shot from Niper missed by only feet at 63'. In between, Bonaventure only threatened once - with a corner kick that the 6'0" Dougall jumped over everyone to snag.

By this point UB had all the momentum, but further subs only strengthened UB's offensive pressure. Correro was brought back in and Megan Abman stepped in off the bench. Together with Kidd they played a high, three-wide forward line that increased the urgency of Benati and Giesen's midfield control. Just minutes after that formation shift, Benati was able to sneak by Bonaventure's front line while Carrero dribbled around everyone and slot home a one-on-one chance against Sarokon.

The remaining 20 minutes were relatively calmer, as Burke rotated his attacking options and UB's defensive efforts continued to hold the Bonnies without a shot until the dying minutes. Their only shot of the second half - and first since about 20' - came in the dying seconds, but UB needed every inch of Dougall's height to push it over the bar and seal the win.

The ladies next play this coming Sunday, when they take on Canisius at noon, once again at UB Stadium. Go Bulls!