Buffalo Bulls in the NFL

Share All sharing options for: Buffalo Bulls in the NFL 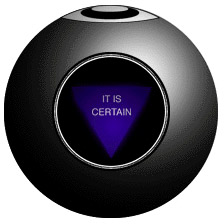 Magic 8 Ball, Will these Bulls make their NFL 53 man roster: It Is Certain

Khalil Mack had a modest first game but the number five overall draft pick is going to be safe for the season. The worst thing that might happen with a bad preseason could be less time once the season starts.

Having seen Mack in person against Minnesota I'm pretty sure he ends up a starter with Oakland this year.

James Starks was good enough to be resigned by the Packers and then on top of that he ran all over the first string Jacksonville defense while Aaron Rodgers and Eddie Lacy sat on the sideline as healthy scratches.

If James Starks stays healthy he ends up on the roster and as a guy who gets 5-10 carries a game.

Magic 8 Ball, Will these Bulls make their NFL 53 man roster: As I see it, yes

Steven Means was perhaps a guy on the bubble when spring ball started but a lot has changed as the preseason went on. He had a killer game against Jacksonville this past weekend. Means wracked up three tackled, two for a loss, and then he sacked  Blake Bortles.

As deep as the Bucs have tried to make their defensive line as I see it Steven Means finds himself a spot. Whats left is for means to earn some playing time.

Trevor Scott also faced an uphill battle in Chicago especially with the Bears bringing in some defensive talent throughout the off season. Scott proved himself enough to get onto the field during the first and early second quarters. He recorded two tackles, it would have been three if not for a penalty that nullified one.

Scotts proven an effective role player in NFL defenses and Chicago could use his talents this season.

Josh Thomas is still on the bubble after a few years in Carolina. The defensive back injured himself off the field earlier this month but even before then the guys over at Cat Scratch Reader. He is one of those players getting experienced enough to cost real money in the NFL so to stay in the game he has to step up his.

The Good news for Thomas is that he has shown flashes of potential over the years, even starting at times for the Panthers. The bad news is he has ended up in the coaches dog house on at least one occasion and suffered a concussion last year.

Branden Oliver has started to win the hearts and minds of San Diego fans and coaches. He had one of the top performances by a rookie last week when he played with the Chargers second and third teams. His touchdown against the Cowboys may have elevated him to fourth on the Chargers depth chart.

He will have to maintain the level of play against teams that have a defense, unlike the Cowboys. If he can put together another good game he may play his way onto the roster.

Jacob Schum is trying to be the punter for the Jets, its a prestigious position on that team and he is up against Ryan Quigley, a second year guy from Boston College.

He looked good last week, besting Quigley in both average punts, and punts downed inside the 20. Schum however lost the "driving range" competition to Quigley 47 yards to 43 yards.

I honestly have no clue how NFL teams go about picking a punter. It will be interesting to see if Schum gets more work next week.

Magic 8 Ball, Will these Bulls make their NFL 53 man roster: Outlook not so good

The one team you really want to see a Bull excel on might be the team that cuts three of them this off season.

The Bills already cut Colby Way and not Naaman Roosevelt and Derek Brim are both facing long odds. Neither player did themselves any favors last week. Derek Brim missed the game with an injury and Naaman Roosevelt's big impact play was dropping an on sides kick.

Both may have a chance for redemption this week when the Bills go to Pittsburgh to take on the Steelers.