To this day the single worst sporting event in Buffalo history. Wide right.

Eight seconds left in the Super Bowl.  Buffalo has possession trailing 20 - 19 lining up for a 47 yard field goal.  The fine folks at ABC flash the stat that Norwood had only made 3–of–7 field goals from at least 40 yards, and a 47-yarder would be Norwood's longest ever on grass.  The one kick over 40 yards that he made in 1990 on grass - 41 yards.

If you were the coaching the Bills would what would you have done?   Try one more play to get closer for a higher percentage kick.  Gamble that you could move the ball 10 - 15 yards vs. risking a turnover or the clock running out and game over?  Marvelous Marv tapped Scott Norwood to win the game for the Bills.

How did Buffalo get to the Super Bowl? Buffalo in the regular season went 13 - 3 with a victory over the New York Giants in week 14 in the Meadowlands 17 - 13.  Loses were all on the road at Miami, Houston, and Washington (shades of what was to come.)  Bruce Smith was named the Associated Press Defensive Player of year that included a season with 101 tackles and 19 sacks.  My favorite moment of the season was Thurman Thomas rushing all over the Jets on Monday Night Football with 214 yards.

The Bills take on the Miami Dolphins in the first round of the playoffs.  Buffalo just took the AFC East crown away from the Dolphins and never trails in a game that amasses 78 points.  Buffalo wins 44 - 34 in a game where the goal lines needed to be shoveled. The cold weather and the snow did not deter either offense.

Next up in the AFC Championship is the Oakland Raiders.  The Raiders come to Buffalo just losing all world running back Bo Jackson the previous week in Cincinnati which turns out to be a career ending injury to his hip.  The Raiders could never get on track and give up 41 points in the first half.  The party is on in Buffalo in it's 21 season in the NFL the Buffalo Bills are heading to the Super Bowl in Tampa.

The Giants are not the favorite in the NFC.  The San Francisco 49ers are the team to beat. Giants start the season with ten straight wins.  The Giants finish the season going .500 at 3/6 with losses again to Buffalo and the 49ers. The Giants held thier opponents to only 211 points, the best in the league.  The first round of the playoffs Bill Belichick changes the defensive scheme from a 3-4 to a four man front.  This confuses the Bears and had trouble blocking all game.  Otis Anderson pounds the ball on the ground and the Giants easily dispatch the Bears 31 - 3.

Up next for the Giants is a trip cross county to the Bay Area to take on the past two seasons Super Bowl Champs. San Fran had a regular season record of 14 - 2 and was a 6 1/2 favorite in this game.  Buffalo saw exactly what it was going to get in the Super Bowl as the Giants D limit the 49ers to only 13 points and score just enough, 15, to make their way to the Super Bowl.

The scene is set in Tampa and Whitney Houston performs a stunning National Anthem with the back drop that America is at war in Desert Storm.  For the first time ever both teams will don a Super Bowl patch on their jersey.  The first Super Bowl without a turn over.  The halftime show was not a big name band but Peter Jennings giving insight into the conflict America was in.

At the end of the first quarter the game was tied 3 - 3 as Matt Bahr was good from 28 yards and Scott Norwood connected from 23 yards out.   Buffalo late in the second quarter leads 12  - 3 as Don Smith scores from the 1 and Bruce Smith sacks Jeff Hostetler in the end zone for a safety.  I still have no idea how that ball does not get loose.  Stephen Baker (the touchdown maker) scores a 14 yard TD pass and the half ends at 12 -10 with Bills in the lead.

Then the drive that would not end starts the third quarter.  The Giants pound the run with Otis Anderson who will eventually score from the 1 but not after the Giants killed 9:29 off the clock. Otis Anderson will be given the first ever Pete Rozelle award as the MVP.  Even in defeat Thurman Thomas should have been given the award.  Buffalo does not score in the third quarter ending with Giants ahead 17 - 12.  Giants do a masterful job keeping the ball away from the Bills.

Thurman Thomas breaks off a 31 yard TD run and after a successful Scott Norwood PAT had the Bills leading 19 - 17.  Matt Bahr will connect on a 21 yard field goal to put the Giants ahead 20 - 19.

Buffalo has the ball and need a field goal to win.  One of the best offensive team in the history of the NFL takes the field. Buffalo dinks and dunks the ball down the field.  Thurman Thomas with an incredible run of 6 yards gets the ball to the 29 yard line. Eight seconds on the clock.  Out comes Scott Norwood to attempt a 47 yard field goal and win the Super Bowl.

Wide Right.   Ugh. I can't move.  I am in disbelief.  I am sitting in the Theta Chi Fraternity House on LaSalle Ave with a split room of Bills fans and Giants fans.  Things get weird.  A Buffalo fan who was couldn't watch left the room and now comes back in the room and chanting "Let's Go Bills!"  It must have been his only way to cope with the devastation Bills fan feel. Another Bills fan gets up and starts to try to fight him.  This must have been his knee jerk reaction and amazingly enough was the softest spoken and most reserved brother we had.  I went from shock over the game to seeing two brothers being separated who are on the same side.  I will give credit to the Giants fans in the room who did not escalate the situation further.  Said it was a great game and felt very lucky to win. 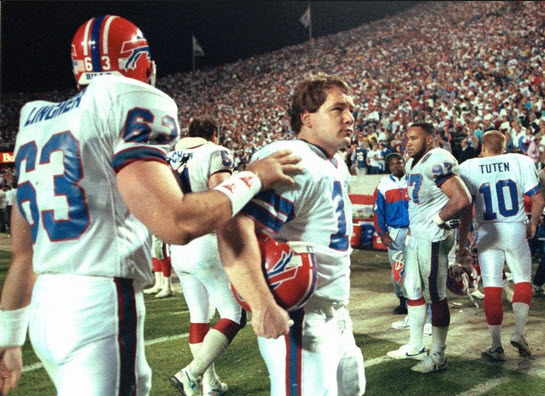 The play lives in infamy.  Wide Right has become synonymous with the city of Buffalo. Hope is not completely gone as the Bills are still stacked and certain to gain from this experience and win the Super Bowl the next year or hell the next three years. 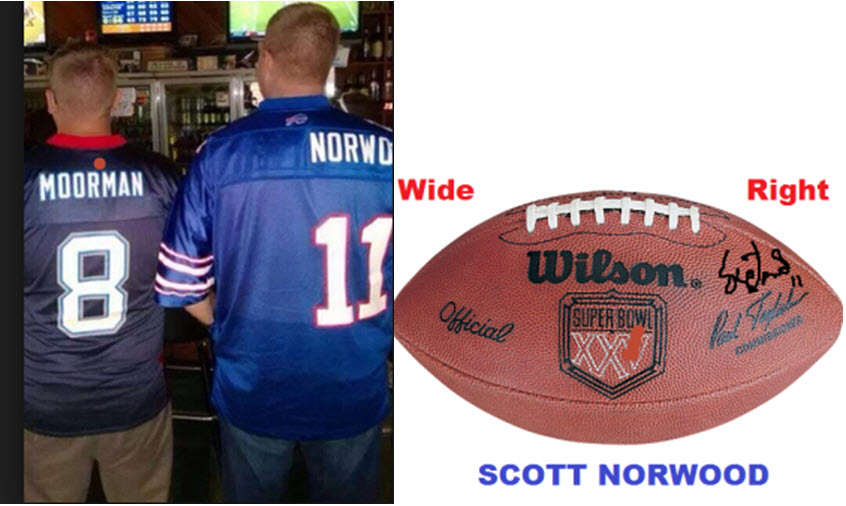 Something about a team losing on the very last play sparks a firestorm.  Funny jersey's and balls, Buffalo party band name, all the way up to movies.  Not one movie but several.   The two most famous are Ace Ventura and Buffalo 66. Buffalo 66 is based on revenge of one man against kicker Scott Wood who missed the Super Bowl kick in 1991.

I have to apologize.  It is still hard to this very day to write about this.  It is amazing that I cannot really get the emotions into this article.  It is a wound that I do not want to open up again.  As I re-read this piece it is nothing more than a run down of the single worst sports moment in Buffalo history.  I will not open myself up again to really portray the emotions of the game. After twenty plus years, I still have the pain of this defeat locked away.

Group therapy time.  I would like to hear where you were for the game and the reaction you had when you heard Al Michael announce WIDE RIGHT and see the ball miss the upright by less that a yard.