The Buffalo football field was damaged by this past winter's freakish number of freeze and thaw cycles that hit Western New York. Because of the damage, UB athletics has to shell out to replace -- not just the turf --  but also the layers underneath the visible field.

When I asked a source within the department about the new turf, I made the mistake of jokingly saying, "Are we going to go with blue turf?"

That was the all the cover needed by an experienced athletics staff member to tell me the truth and do it in a responsible way, giving away nothing.

"No, Nothing that drastic," was the reply. I took that to mean there were no major chances coming. So I made a suggestion (I still like mine more).

Buffalo Bulls New Field - Bull Run
Danny White has been nothing if not bold in his time at UB, and this field is bold, without being some tacky gray color. It captures what Danny White wants to do: show the world that UB is the largest state school in New York and the biggest state athletics program.

My design published last week; close but no cigar....

It turns out I was dang close to nailing the new design. I suppose a big blue state might tread too closely to Boise's ridiculously stupid colored field patent.

White's new football field design looks a lot like the floor at Alumni Arena, which White put in last summer. 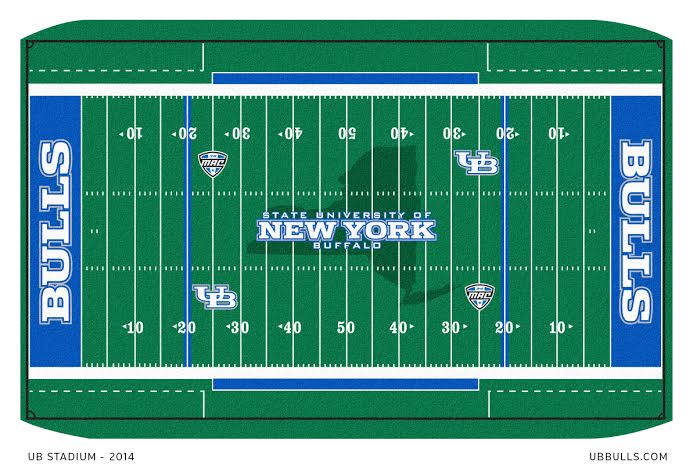 The design being implemented by UB Athletics

New Turf to Be Installed at UB Stadium - Buffalo
The new playing surface will be made of A-Turf Titan, the industry's ultimate synthetic surfacing system, and is the same field surface used by the Buffalo Bills at Ralph Wilson Stadium. In addition, Titan has the industry's best safety rating.

All of the same elements are present, which means that we can expect the same corner of UB fandom to come down on this design. I would be willing to bet that it will be a smaller rumbling this year, because White now has a solid year under his belt to muffle some of the complaints that it's "too much, too soon."

Last year, when the whole rebrand was a new idea, 52% of Bull Run readers who were polled said the shadow outline of the state with the New York brand on top was "Just right," 43% said it was "too much," and 5% were happy but wanted an even more bold change.

Fast forward a year, and many of the people who hated the idea of a rebrand saw increased ticket sales and donations to the department. Fans were also treated to fun football and hoops seasons buoyed by star performances. Chances are this year, White's watermarking of a UB venue will not draw nearly as much ire from alumni and fans (though I would not hold my breath on the Buffalo News).

The only picture I have is this concept passed along by Athletics. When the real turf starts to go in, we will try to send someone by the stadium for photos, so stay tuned to Bull Run over the next couple of weeks for updates.