After the worst outing of his career, (13 for 25, 80 yards, 2 INTs) en route to a 41-0 loss at Boston College, Drew Willy's week got even worse. In practice, Willy broke his thumb in a drill to test Willy's skill at passing under duress. Then it got worse, the following Saturday, Willy's backup Tony Paoli led Buffalo to their second win of the season, a rousing 41-14 win over Kent State.

Behind the scenes, it looked like Drew Willy's career as UB starting QB was over. A high school quarterback 30 miles east of Willy's hometown of Randolph, New Jersey caught the eye of Turner Gill. His first recruiting win, Buffalo signed Chris Johnson, 3-star QB from Patterson, New Jersey. Johnson was seen as Gill's savior, the QB he would bring in to put a stamp on his program. Drew Willy would have to fight for his job in the summer of 2007, but It was a foregone conclusion that the job would probably go to Johnson. 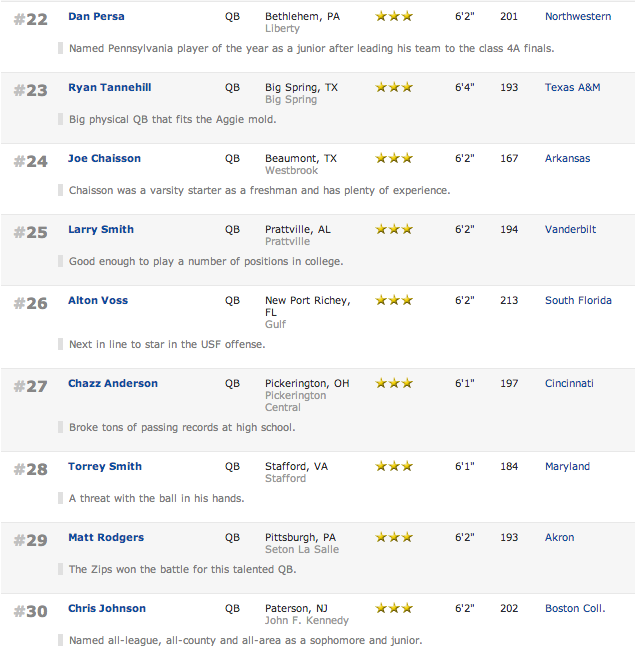 Chris Johnson was on the list with future NFLers Ryan Tannehill, Torrey Smith and one-year Bull Chazz Anderson and would have been the most hyped UB prospect ever at that time. However, Johnson reconsidered, decommitted from Buffalo and committed to Boston College, where he would be moved to defensive back but never make an impact. With no incoming QB, and no returning competition, the QB job fell back to Willy by default in 2007.

when you are knocked down, you control whether you get back up. Drew always gets back up.

His comeback featured over 5800 yards and 40 touchdowns in his final two years as UB's starter, and in 2008 he led Buffalo to a MAC Championship. In two years Willy went from QB by default, to one of the most legendary passers in UB history.

At UB, Drew's story was an example to every young player, he showed you can't control injuries, you can't control who is recruited around you, and you will have bad games, but you can work hard to improve your game, and when you are knocked down, you control whether you get back up. Drew always gets back up.

After UB, Drew was on the Baltimore Ravens practice squad and on the Indianapolis Colts active roster as they played for the Super Bowl in 2009, but he never saw any on field action.

In 2010, Willy signed with the Las Vegas Locomotives of the United Football League. He backed up Tim Rattay, for four games until Rattay sustained a season ending injury. In his first start since UB, Willy defeated the Hartford Colonials, where he threw 18 for 29 for 191 yards and a touchdown. Two weeks later, Willy played the first half of a game against Sacramento, and his backup Chase Clement almost erased a 21 point deficit in the second half. He was impressive enough to wrestle the starting job away from Willy, but unlike Willy, he struggled mightily against Hartford. Willy was inserted into the game in the 4th quarter where he went 10 for 16 for 109 yards and a touchdown, in a losing effort.

Las Vegas played Florida in the championship game, but Chase Clement was named the starter, and he not Willy, led Las Vegas to a three point win. Drew Willy was knocked down again. However Willy parleyed his UFL experience to take a shot at the New York Jets. Willy stayed on the Jets practice squad and later was on the practice squad of the San Diego Chargers. His NFL career ran it's course and in 2012, Willy signed with the Saskatchewan Roughriders of the Canadian Football League.

Willy won the MAC in 2008, won the UFL in 2010, now he would experience winning the Grey Cup in 2013. Willy was stellar in Hamilton where he went 14 for 25 for 269 yards and 3 TDs earning his first victory as a starter in the CFL. He sparked a mini-QB controversy as Darian Durant fought injuries. Durant came back strong, and led the Roughriders to the Grey Cup Championship, but Willy was officially a hot CFL commodity. After the 2013 season Willy was traded to Winnipeg with eyes on the starting QB job.

This time, Willy would not be knocked down. In fact this time he was the one who knocked. His old Las Vegas teammate/job stealer Chase Clement was signed by Winnipeg, but this time he couldn't take the starting QB job away from Drew. Willy made his first start for Winnipeg last Thursday and he was electrifying, 19 for 27 for 308 yards and 4 Touchdowns. For his efforts, Willy was named CFL Offensive Player of the Week.

Winnipeg's surprising breakout game shouldn't be surprising to UB fans, but it is certainly encouraging for Winnipeg fans. The last time Willy threw 4 TDs was in the opening game in 2008 against UTEP. That year, Willy threw 21 more touchdowns en route to an unlikely MAC Championship. If history repeats, maybe Drew will lead Winnipeg to an even more unlikely CFL Championship in 2014. His Bombers play tomorrow against the Ottawa REDBLACKS.