MunchMadness - The Left Bank vs. Lloyd's

Two food hot spots on opposite ends of the spectrum. This may be a tough match-up for the Left Bank with all the Twitter followers for Lloyd's. Eat well munchers of madness!

Share All sharing options for: MunchMadness - The Left Bank vs. Lloyd's

Buffalo and WNY has some amazing places to eat.  At Bull Run you will decide the best place!  Half way through the second round. Participants in the second round included this match-up of the Left Bank vs. Lloyd's, and upcoming the Grover's vs. Gabriel's Gate, Dick & Jenny's vs. Chef's, and Ted's vs. Buffalo Chop House.   Second round victors so far are Bocce Club, Charlie the Butcher, Chiavetta's, and Gadawski's. 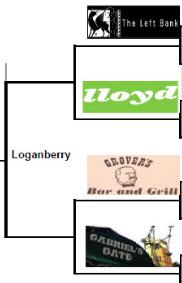 The Left Bank vs. Lloyd's:  How they made it to the second round.

When you scan through reviews of the Left Bank it is amazing to see blurbs strongly recommending reservations and one reviewer stating it took six weeks to get a table.   The Left Bank has been open and operating for over a decade.  To see how busy they are is a reflection of the food, the service, the atmosphere, and so much more. While compiling MunchMadness I learned that the Left Bank has a great Sunday brunch from 11:30 - 2.  They had me at steak and eggs.  Also live Jazz.  I am going to assume they are booked for Mother's Day.

The original and the king of the Buffalo food trucks.  The success of Lloyd's has seen the growth of many new trucks. Here is a cool website with a list of 19 trucks Buffalo Food Trucks.    Here is the last Yelp!* review that nails the Lloyd's experience and food trucks in Buffalo 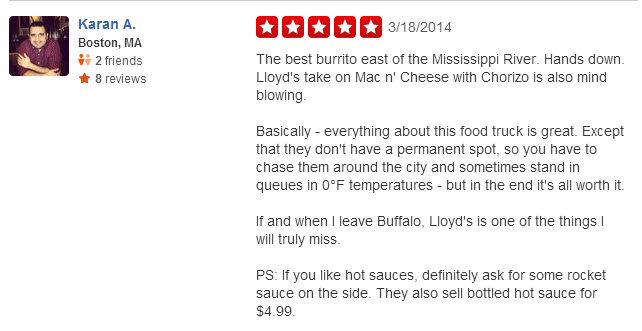 Many were pretty upset (especially my brother in law transplant in North Carolina) that Mighty Taco was not included in MunchMadness.  Some people even sent me comments.  I saw a pattern that they were all from out of state.  Ex-Buffalonians still having the Mighty crave.  I responded back to all stating I used to be a Mighty junkie as well until my second Lloyd's.  I have never been back.