The real success of Danny White may be the other coaching changes he made, particularly Women's Basketball Coach Felisha Legette-Jack and Softball Coach Trena Peel. In her first season, Peel has taken the Bulls to their 3rd MAC Softball tournament, and won their first ever MAC East title.

The Bulls are led by Tory Speckman (Sr, Alvin, TX), Holly Luciano (Sr, Toms River, NJ), Sammi Gallardo (Sr, Chula Vista, CA) and Karly Nevez (Jr, Edmon, OK). Speckman is 19-11 this season as a pitcher with an ERA of 2.20. Nevez, Gallardo and Luciano are all batting over .300 with Gallardo providing the power with 15 home runs and 39 RBIs.

UB Softball heads to Firestone Stadium in Akron, Ohio where they will face Northern Illinois on Wednesday May 7th in the MAC tournament. UB defied their history to win the MAC East, and now they must defy their tournament history. UB is 1-4 in the MAC Tournament and have been outscored 32-4.

If the men qualify, this will be the first year that both the Softball and Baseball teams qualify for the MAC Tournament in the same year. The NYBI plans to invest in improvements to Nan Harvey, and to build a new baseball stadium. The improvement on the field along with improvements to the facilities could quietly turn UB into a spring powerhouse.

*Note: This article was previously published with the wrong name for coach Peel.

The following comments were posted and I have posted a screenshot here to preserve the comments while deleting the previous post was deleted to prevent the wrong name from circulated. Thanks to Paige Miller for catching it. 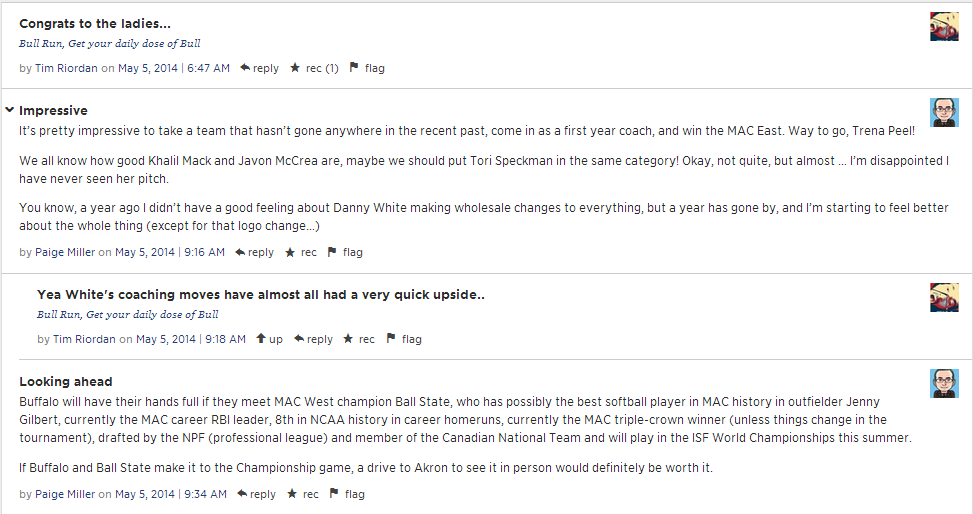