The last battle of the second round pits Buffalo's Hot Dog King vs. Buffalo's Steak mecca.

Buffalo and WNY has some amazing places to eat.  At Bull Run you will decide the best place!  The last match-up of the second round to get to the sweet eight is Ted's vs. Buffalo Chop House. Second round victors so far are Bocce Club, Charlie the Butcher, Chiavetta's, Gadawski's, Lloyd, Grover's, and congratulations to Dick & Jenny's. 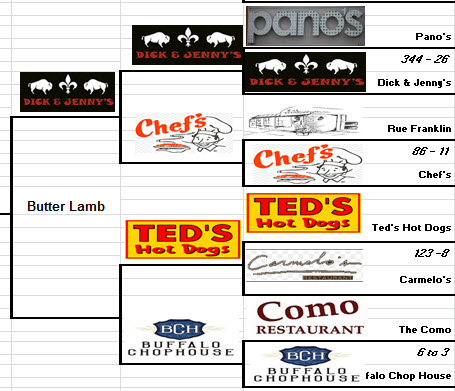 How did Ted's and Buffalo Chop House make it into the second round?

Ted's took on Carmelo's in Lewiston.  This was a tough match-up for Carmelo's as Ted's took 94% of the vote.

Buffalo Chop House took on The Como in Niagara Falls and both restaurants failed to excite the voters.  BCH did take 76% of the votes.  This is going to be a tough week for BCH.

Ted's opened their first permanent location in Tonawanda in 1948.  Does anyone have pictures of this? I can't imagine trying to drive up Sheridan in the 40's like the six lane road it is today.  Ted's has 9 locations with 8 in Western New York and one in Tempe, Arizona.   Here is some motivation to get some dogs - a coupon for a free dog.  It pay's to come to Bull Run! 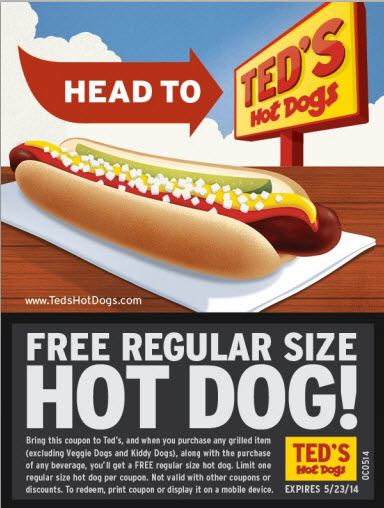 It expires 5/23 so get your your tail moving to Ted's.

The Chop House has been in Buffalo for over 20 years and is a great example of a Buffalo renovation.  Everything about the restaurant has been done right from the comfortable chairs, exposing original construction materials, dog paintings, valet parking, bar, food, and so much more.  The issue that many have is the price.  A couple with wine, soup, sides, entrees, and dessert will be close or over $300.  (That is many trip's to Ted's)  For the price you are getting the best in Buffalo or any other city including Manhattan.  A little tip on BCH, the restaurant is constantly having deals were you spend $25 and get a $50 gift certificate