The fourth match up pits two completely different Buffalo institutions against each other.

The Buffalo area has amazing food and amazing places to eat. It is time to finally end the debate, what restaurant is the best! You are going to choose the Best Place to Eat in Buffalo. 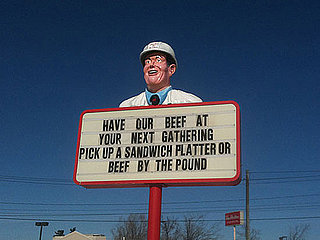 Buffalo is known mainly for chicken wings. Yeah we get it! The second most popular export is Roast Beef on a kimmelweck role with loads of horseradish and mustard. Many places in Buffalo serve a great RB sandwich besides Arby's. Very easily Schwabl's Schwabl,s Web Site and my favorite beef place Mitchell's Tavern Mitchell's Web SIte could have been included in the top 32. But we went with the Buffalo 'ambassador' of the roast beef sandwich.

Charlie the Butchers family has long been a staple in the Buffalo food world. Ran butcher shop in the Broadway market and one of the Roesch's was also Mayor of Buffalo.

Charlie the Butcher, as the company is now officially known, operates a multifaceted restaurant and catering business that has taken the Roesch family legacy and married it to the equally-rich culinary traditions so prized by those of us who are proud to be Buffalonians and so sought after by people who can only wish they were. Prime among these delicacies is, of course, the world-famous Beef on Weck sandwich.

A Buffalo staple of going over the top, giving back to the community, saving blacked out Bills games, and family business stories. I have to admit that I have only been to Salvatore's one time for a wedding. I have never heard a bad word about the food. Mainly you hear about the experience and the surroundings. Going to Salvatore's is an 'experience.'

Opened in 1967, Salvatore’s Italian Gardens was always known for their over the top decor. Salvatore’s is now well known for Steaks, Fresh Seafood, Modern Italian Cuisine and Fine wine selections with over 550 labels. In the years 2010, 2011, & 2012 Salvatore’s has been awarded the wine spectator award of excellence, dirona award, open table dinners choice award, triple A 3 diamond award, and many more. We are also noted for our elegantly appointed banquet and conference center that can handle events from 30 guests up to 600. Joe Salvatore purchased the family business from his father in 2003, and now along with his wife Paula and their three children, Josette, Russell and Nicholas they handle the day to day operations.