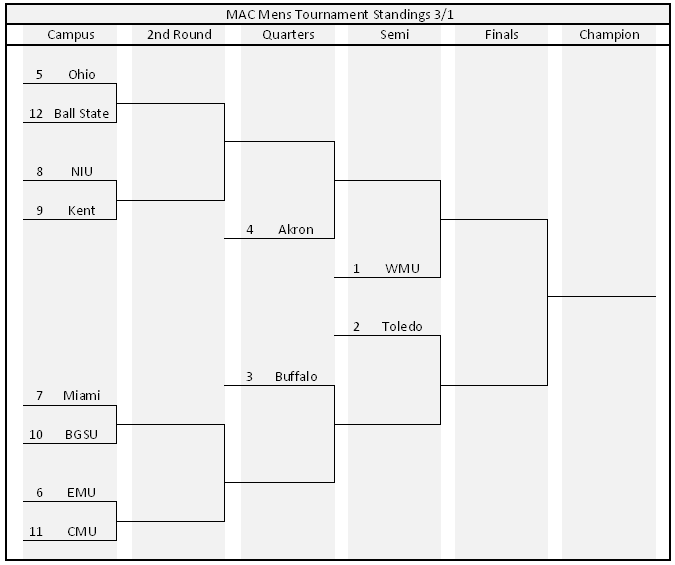 NOTE: Jeremy Guy tweeted that WMU holds the #1 seed if the tournament started today. While Toledo holds the tiebreaker over the Broncos on the basis of 'best win' - UT is 1-0 against Buffalo, while WMU is 0-1, a twitter user reminds us that there's a 'divisional record tiebreaker' in applied before the 'best win' tiebreaker.

For the purposes of UB, the relative order of UT and WMU is moot.

The easiest way for UB to get a top 2 seed was to win both their games. Unfortunately this didn't happen, and now they're looking for help to get the bye into the semifinals.

UB cannot get the 1 seed, because they cannot pass Toledo and lose the tiebreaker (head to head) to the Rockets.

UB owns the head to head tiebreaker over WMU, and in a three team tie will be placed second, after Toledo but before WMU.

Northern Illinois almost did the Bulls a huge favor tonight, but fell short in the final minutes. WMU's last chance for a loss that would knock them down to the three seed and give Buffalo that triple bye comes Saturday at 7:00 PM against Central Michigan. By then, UB's game with the Bowling Green Falcons will be over and we'll know if it matters or not.