I've been holding off on this post for much of the season, because when you're looking at achieving a four-digit goal in two-digit increments, sometimes I worry if too much hype too early is just setting up a letdown. But it's not that way anymore.

It's time. Javon McCrea is closing in on a number of statistical thresholds. For the last few weeks I've been including the count at the bottom of Instant Reactions posts and in comments, but today we get a dedicated post.

Coming into the season the senior from Newark, NY had career numbers of 1,467 points and 702 boards, solid numbers for anyone's career. Looking at those numbers and dividing by three, you say "Gee, another 'typical' season for McCrea and he'll approach 2,000 points and 1,000 rebounds."

If you figured that he's putting up better numbers now than he did in his freshman year, you had room to get even a little more optimistic.

Let's start with points. Last year McCrea set a UB single season record with 611 points. On one hand, another such season would blow him well past Rasaun Young's career mark, and past the nice, round, 2K benchmark (More like TWENTY-2k, am I right? - ADDW). But on the other, the 533 points needed just to get to to 2,000 would still constitute a top-5 season in the UB record books. Let's think about that for a second.

Javon's production could drop by more than 2 ppg from his junior season, and he'd still hit 2,000 and still have one of the best scoring seasons in UB history.

In fact, in terms of year-by-year scoring, it's not just #12's* huge junior season and spate of double-doubles this year...

Javon's freshman season featured the most points by a first-year player in school history, as did his junior year (obviously). He slacked off a bit his Sophomore year, but #3 all time on the school books is pretty good too. I guess.

Switching to rebounds, 300 boards in a season is a little more of a stretch, and requires a significant step up. McCrea pulled down 261 last year, which tied with Yassin Idbihi for the best modern-era mark. Getting to 300 would mean the 6th best rebounding season in all of UB history, up in the Sam Pellom and Curtis Blackmore numbers, and would require a likely double-double average for the year, something no modern-era Bull had ever done.

For a refresher, modern-era Bulls include Watt and Idbihi. They include Cage and Turner Battle. They include Rasaun Young and Mike Martinho. (They also include the unfortunate Andrew Atman, but that's not for here.) Many of those guys are guards and would never rake in the rebounds that a forward can, but McCrea is putting up numbers to rival the best regardless of position.

So far this season the forward is averaging 18 points and 10.2 rebounds per game. Check out just MAC play, since those are the only opponents we'll see the rest of the year, and those numbers get bumped up a touch to 18.2 and 10.7. Looking at some modern-era, single-season rate stats, we see that there's room for more Kraken on the record books: 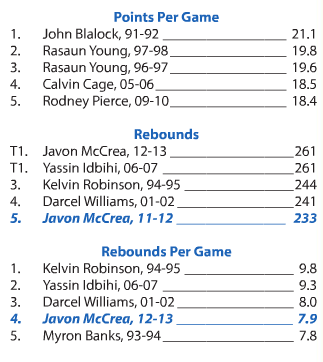 Right now Javon has 359 points and 203 boards on the season. Looking ahead at the benchmarks and taking into account his current rate:

This is where things get the slightest bit dicey. With eight regular season games left McCrea is on pace to score 144 more points before the MAC tourney. Of course, UB will get at least one game in there. A win would give UB a tenth game and another opportunity to get closer to the mark. And you have to think that a winning record bolstered by a superstar approaching these benchmarks would justify an invite to one of the midmajor consolation tournaments. You even have to think that the Athletic Department might pony up for a home game, should it come to that.

So thinking it looks pretty good for at least 10 or 11 (at least, but I'm not counting on more) more games, 2,000 is within reach, provided the close-to-20 ppg stretch extends through the entire year.

That's such a wild sentence to say. But really, 2,000 would be gravy, and barring disaster, it looks like Mr. Young is going to join every other player on the UB books and bump down a notch on the career scoring list.

When it comes to rebounds, Pellom and Blackmore (who played only three seasons!) are well out of reach, with 1,297 and 1,175, respectively.

Again we have a number that's just under ten games' worth of basketball away at the current pace. Another 20 rebound day wouldn't hurt, though.

It's also worth pointing out that McCrea hasn't faced much of the MAC East yet, where the better teams and better coaches are. It would be disappointing, but not wild, to see his rate stats go down just a bit against better competition. Of course, he mutilated WMU's Whittington, who is 6'11" and supposedly the "most NBA-ready" big man in MAC, so maybe I'm grasping for straws.

And of course, just imagine how this would look if UB had the same number of OOC matchups as the rest of the MAC, or if the SDSU Jackrabbits had bothered to reschedule their cancelled game. Should McCrea fall a handful short in either or both categories, those missed opportunities will certainly be on my mind.