A few weeks ago, Bull Run wrote about a move to the American Athletic Conference. The article was aimed at AD Danny White and motivated by the Mid-American Conference's callous cancellation of UB's final home football game. At the time the college football landscape was stable, but a major shift occurred on Sunday when the ten team Big 12 was left out of the College Football Playoff.

Ready For The AAC Now? 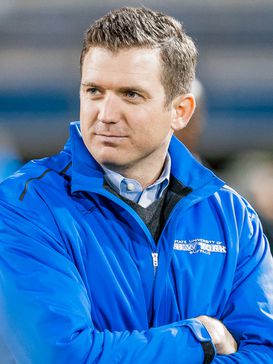 This cancelled game is the last straw for me. Get us out, get us out of the MAC.

Speculation has one or two AAC teams moving to the Big 12, moving the conference to twelve teams, giving them a conference championship game and hopefully a better shot at the next College Football Playoff.

This message isn't for Danny White, who knows and is doing everything he can to show off UB's assets; it's for the American Athletic Conference and the UB faithful. It's time to show the AAC that we are ready to make the leap.

This week will be AAC week at UB Bull Run. We will post twice a day through Saturday with reasons why UB fans should want to be in the AAC, and why the AAC should want UB.