UB Versus: Let's Talk About the Defense

Share All sharing options for: UB Versus: Let's Talk About the Defense

I am a staunch opponent of the UB Defense. As a result of that, I avoided defensive stats in UB Versus, no need to beat a dead horse right? However after another great offensive outing was offset by a poor defensive showing, I had to know, historically, is this the worst UB defense in recent history?

Defense is a combination of scheme and player effort. Scheme can be summarized as bend but don't break, allowing short plays and hoping to stop the offense eventually, or aggressive, where the defense tries to force the opponent off the field quickly.

I would expect an aggressive defense to shut down the opposing offense, (low yards gained), produce sacks and turnovers, but also occasionally get hit with a big play.

Bend but don't break, I'd expect less sacks but similar number of turnovers but a lower turnover per play average, more yardage gained, but low per play yardage gained.

While the Jimmy Williams defense was very bend but don't break

The 2010-11 Inge Defense was very aggressive, banking on possibly UB's best secondary of all time in 2010, and falling off in 2011 as that secondary graduated.

Since 2012, the Bulls have played a hybrid of aggressive defense and bend but don't break. The secondary has not thrived under this system, and there was a sharp increase in stats in 2012 but many of the gains were scheme spiting, not scheme aided.

In 2014, minus the largest X-factor in UB history, Khalil Mack, the Hybrid defense has totally failed. Allowing highs in points scored, passing yards allowed, yards per completion and lows in sacks and turnovers. This is the worst defensive start in UB's competitive FBS history. The only defense worse in my opinion was the 2003 UB Bulls.

UB has allowed more yards each season under Quinn, and has been killed via the Pass game. 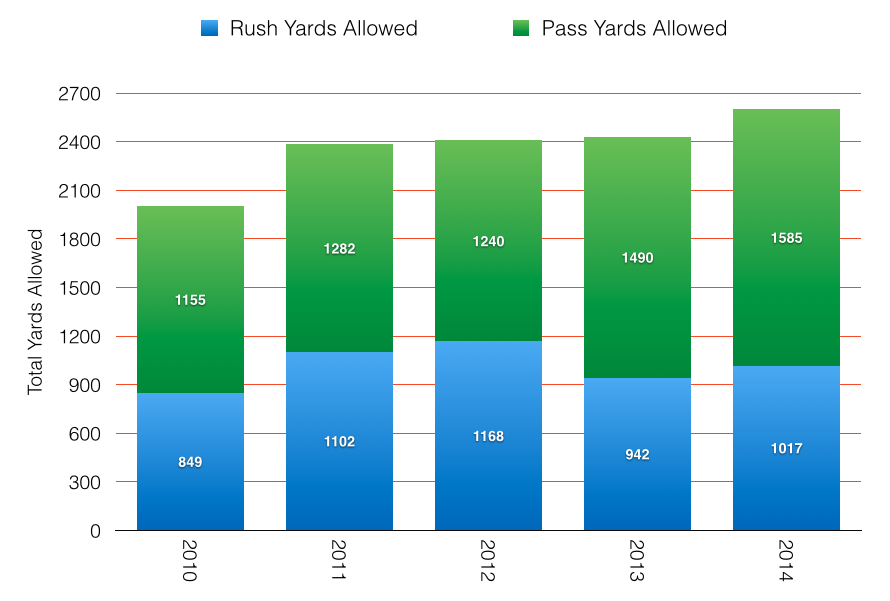 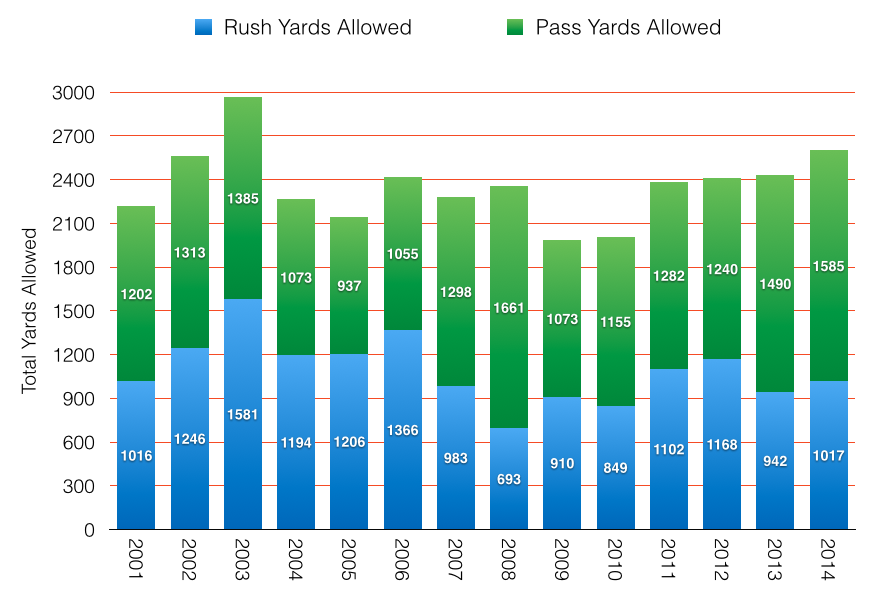 The important thing about this first graph is that UB is pretty much keeping opponents under 35 points, except for their first two years in the FBS (1999, 2000) and this year. 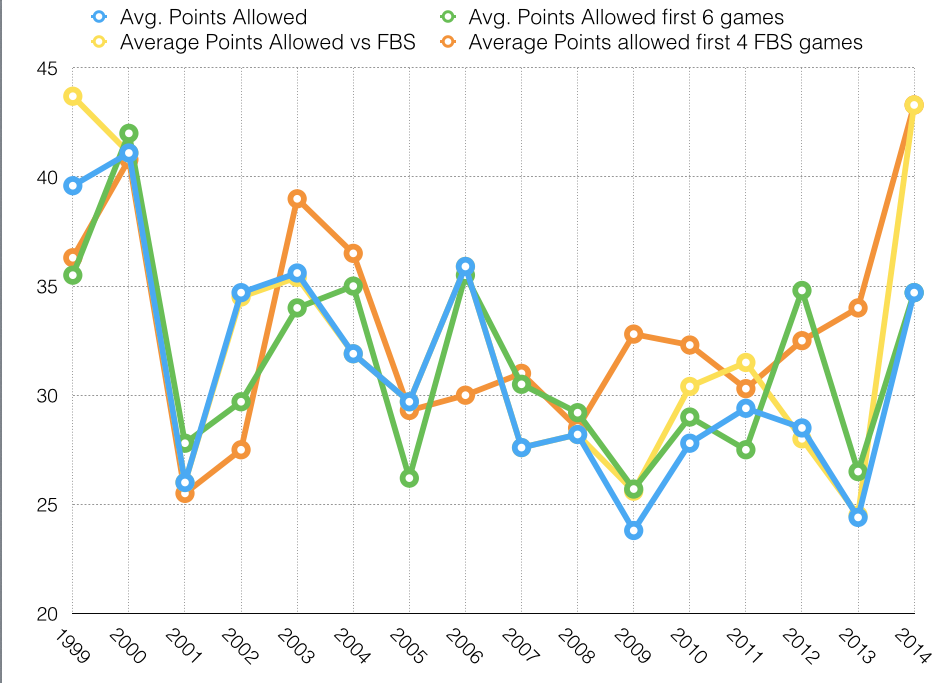 UB has steadily kept opponents between 28 and 35 points. Last year, there was an increase in points allowed in the first 4 FBS games, but that can be forgiven as 2 of those 4 games were at Ohio State and at Baylor. Overall, the average points allowed last year was second only to the 2009 season. 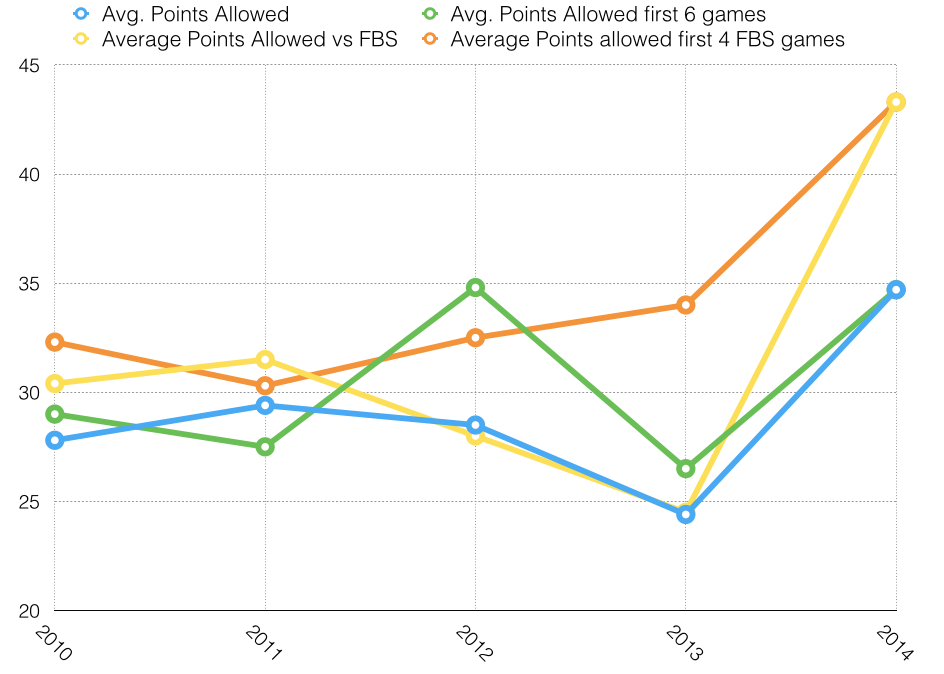 The good news, UB is relatively good against the run, allowing 4.3 yards per carry after a dip to 3.94 ypc last year. The bad news, UB is not good at anything else.

This is the worst team in yards per pass attempt, Yards per dropback (pass yards - sack yards / attempts + sacks) and the third worst in yards per play since 2001.

You don't need a chart for this, your eyes tell you why run? You can pass all over this team. But I made a chart anyway.

UB is giving up almost 6.5 yards per play. When the opponent drops back to pass, it results in almost 8.5 yards per dropback. When the opposing QB throws a pass, it has resulted in almost 9.5 yards per attempt. UB's defense has only forced 1 Interception. This is most likely the worst secondary in UB's FBS history.

Yards Per Completion Chart - Since 2001

This is the scariest chart.

Since Lou Tepper came to UB, yards per completion in the first six games of the season were never below 14. This year opponents averages 18.6 yards per catch. 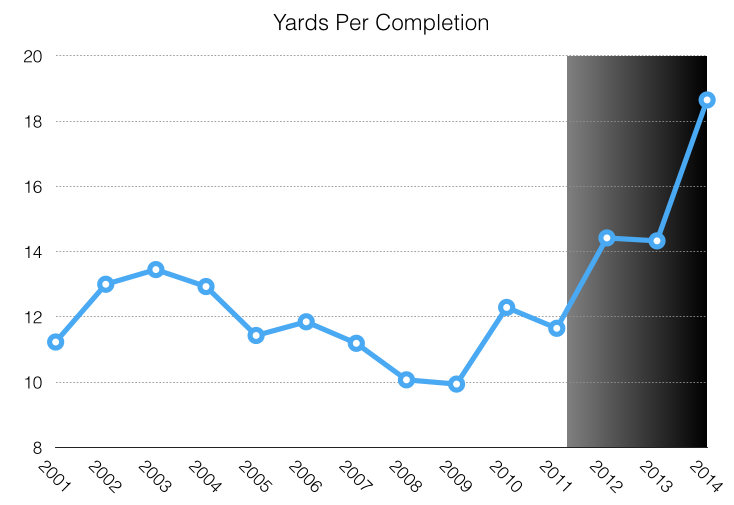 Another chart indicative of a bend but don't break philosophy. The higher the percentage, the more likely the strategy allows short-yardage high percentage throws. You see this in the first six games of 2008, UB allowed almost 70% pass completion, but completions only went for 10 yards on average. In 2008, UB allowed the most passing yards since 2001 in their first six games, but the bend but don't break philosophy was buttressed by aggressive turnover seeking.

In 2014, UB is only allowing 50% completion, but those completions are for a lot of yards, contributing to UB's second highest passing yards allowed. It seems UB is attempting to establish "shut down" corners, if shut down, it's great for UB, but they pay a high price if they do not shut down a wide receiver. 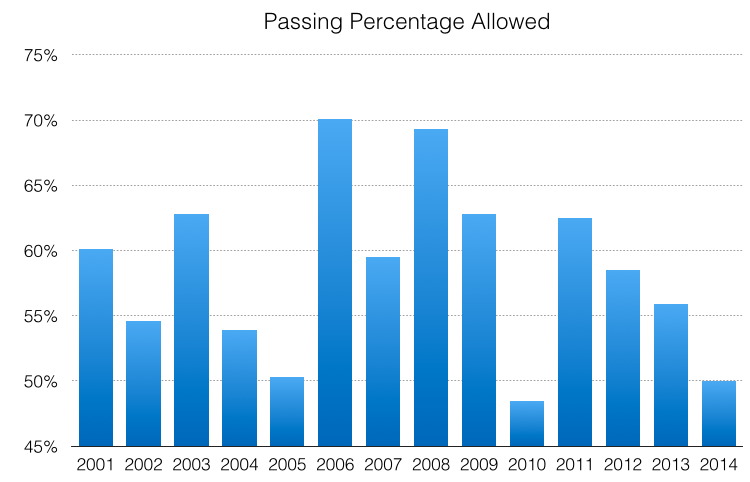 Sacks have fallen back to 2011 levels and the BDPs have fallen, this looks to be the Mack effect.

2008 Bend but don't break lead to very high passing yards allowed and high completion percentage, but only 6.5 yards per pass dropback. Dependent on mistakes from other team, has relatively high 3% turnover rate.

2010 Yards per rush down to around 3.6, yards per dropback down to 5.4. Bend but don't break jettisoned for an aggressive shut down defense with a sharp decline to 48% passing allowed, an increase in yards per completion to 12, and a big increase in sacks, interceptions and tackles for loss.

2013 Yards allowed increased, yet points scored decreased, pointing to a return to bend but don't break. But the numbers show it was a continuation of an aggressive defense. Completion percentage was around 56%, and yards per completion was over 14. The defense was succesful because they sacked the QB once for ever 10 dropbacks, which lowered the opponents yards per dropback to 6.5 yards. UB also intercepted 5% of throws and forced a turnover on 3.5% of plays.

2014 Yards allowed increased again, despite only allowing 50% completions, almost 1600 passing yards have been allowed. UB is burned by 8.4 yards per drop back and over 18 yards per catch. With interceptions under 1% and turnovers under 2%, there is nothing stopping opponents from scoring at record levels.