With Jeff Quinn's departure from Buffalo there are now two big things going on within the program. The first is of course Danny White's search for a new coach. He has said a "National Search" will begin immediately, that's pretty much the same thing he said before hiring Shawn Burke, already an assistant at UB, as the Women's Soccer coach after relieving Burke's boss of his job.

As much as Danny White likes to make a splash with big names he has set precedent for hiring the assistant of a fired coach. UB's Alex Wood now has five games to make his case as permanent the successor to Jeff Quinn. If Wood runs the table UB probably goes to a bowl and all of the sudden the coaching decision gets even more complicated for Buffalo.

Last Monday Wood woke up in his fourth season as UB's offensive coordinator, this Monday he is the man in charge of a 3-4 UB football program who just dropped a road game to EMU, a game in which UB was a 13-point favorite to win.

Offense Under the Four Coaches of UB's FBS Era 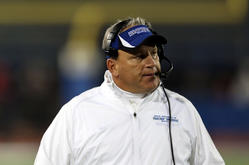 The offense he built at UB has become one of the best in the schools history. The Buffalo Bulls survived the departure of their all time leading running back, Branden Oliver, and one of the top receivers in the programs history in Alex Neutz while also losing their second receiver Fred Lee.

Wood took over from Greg Forrest, a long time associate of Quinn who came over from Cincinnati. Forrest was credited with developing the quarterbacks in the Cincinnati stable but his offense at Buffalo was one of the worst the program has seen.

Wood and Quinn reconfigured the offense in 2011 and it showed immediate results. In Wood's first season UB averaged eight more points and 68 more yards of total offense per game than in 2010. Buffalo had 13 plays of 40 or more yards in 2011 - the most in its Division I era.

Other than running the offense Wood's other responsibility was as receivers coach. Wood coached Marcus Rivers to his first All-MAC selection and helped to develop Alex Neutz who became one of the greatest to put on the Blue and White.

Wood was part of an anti-youth movement by Quinn. He came to Buffalo with over 30 years of experience at the Division I level, including a stint as JMU's head coach in the 1990's. He has also served as a coordinator in the National Football League.

His assistant coaching career is highlighted by time on Dennis Erickson’s staff for the Miami Hurricanes, coaching the running backs while helping the Canes to a pair of National Championships (1989 and 1991).

Right before coming to Buffalo Wood was on the staff that helped Miami come out of nowhere to win the MAC in 2010 just one year after winning only a single game.

Wood has also been a wide receiver coach in the NFL with the Cincinnati Bengals, a quarterback coach for the Minnesota Vikings and the offensive coordinator of the Arizona Cardinals.

From 1999-2004 Wood coached in the NFL. He was hired by Dennis Green as the quarterbacks coach of the Minnesota Vikings where he worked with Daunte Culpepper.


In 2004, Wood served one season as the offensive coordinator for the Cardinals, overseeing the offensive staff and handling play-calling responsibilities.

After 2004 Wood returned to college football.  He spent the 2006-07 seasons as the passing game coordinator at the University of Arkansas before returning to the MAC 30 years after leaving Kent State.

There is no question UB's offense is up to the task of making some sort of run at a winning season, that's never been a question. What remains to be seen is how does Wood deal with the defense? Eight days ago he and Lou Tepper were peers, now Wood is in the big chair.

If Wood does not push Tepper to make some adjustments on defense than the team may continue to struggle. If, however, Wood and Tepper come up with a formula for an impact defense they might lead UB to their second consecutive winning season for the first time since UB was a DIII school in the Reagan Era.