Three months later, it is hard to remember how close the EMU game was for the first half. If you looked at the stats after EMU's first touchdown, you wouldn't believe the was 21-7 UB.

EMU's running attack of Bronson Hill and Darius Jackson ran 10 times for 54 yards. The receiving core had four receivers with 2 receptions and five receivers with 10+ receiving yards. Tyler Benz was almost perfect, 8-for-11 passing for 108 yards and a TD. Benz was only almost perfect, because he lost a fumble to Khalil Mack and threw an interception on the one-yard line to Courtney Lester. UB's lead was built on turnovers and the runs of Branden Oliver, but the EMU scoring drive, that broke a 59:15 UB shutout streak, proved UB's defense couldn't live on the edge forever.

On the ensuing kickoff, EMU kicked the ball 54 yards with 3.47 yards of hangtime, to Devin Campbell who caught the ball on the 11, and returned it to the 28 yard line. A flag for offsides was thrown on EMU, and Coach Quinn was happy to take the 5 yards at the end of the run to set up the Bulls on their own 33-yard line.

Former EMU Coach Ron English however noticed that Campbell had erred. Campbell's knee hit the ground as he fielded the short kickoff so the ball was down at the 11 and the penalty if accepted at the spot would start UB at the 16. With the new line of scrimmage, UB forced EMU to re-kick.

This time, EMU kicked the ball 66 yards with 3.43 yards of hangtime to the 4 yard line. The second kick was both longer and had less hangtime, giving UB plenty of time and space to set up the lane. One Eagle laid a hand on Campbell at the 20, but by then the Fresh Prince had enough of a running start and green grass ahead to power through the arm tackle and sprint past the other 10 Eagles into the end zone. The 96-yard return was the 3rd longest in UB history and the longest play by a Bull in the 21-year history of UB Stadium

After the Campbell TD, Buffalo dominated the game, winning 42-14. Hill and Jackson combined to run 11 times for only 22 yards after the return. Tyler Benz crashed to 4 for 8 for 49 yards before being benched. Only one receiver would make more than 1 reception and only one would gain more than 10 receiving yards after the return. Campbell with a little help from Coach English*, destroyed any sense of momentum EMU would have and UB for the first time ever, defeated the Eagles.

*How did an innocent challenge go bad? That was a s***bird Challenge!

He was a scale in a past life: 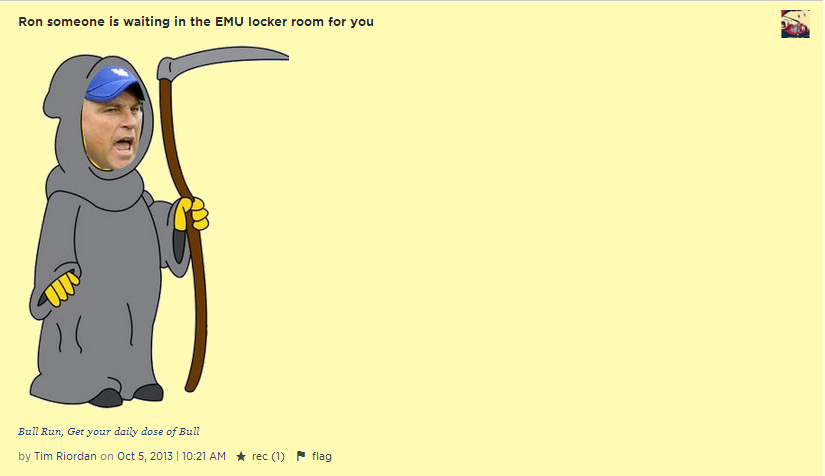