Let's look at who could replace Jeff Quinn as the head coach!

Share All sharing options for: So Jeff Quinn looks good in green!

If White looks back or is bored to tears with everyone talking about Gill Magic, maybe Danny looks back at that regime to name UB's next new head coach.  The first name to possibly pop up from the past is Turner Gill.

Bon Jovi - Who Says You Can't Go Home (via BonJoviVEVO)

Sorry Bon Jovi, but some times you can't go back home.  I really believe that Turner has found a coaching home at Liberty.  Thank you to Kansas for providing financially for the Gill's.  Also, watch Liberty one day move up to the world of FBS football.   It was also interesting to see that Turner did not get any run at UConn at all.  I understand that Warde needed to make an impact with this hire.  One way would be to get the band back together.  Instead Warde pulled Bob Diaco, another Kelly/Quinn circle guy who was the defensive coordinator at Notre Dame.

Could Danny pull a woman's soccer coach move and hire currently on the roster?  He sure could but only Teper to me would get an interview.

So who from the Gill run could return back to Amherst 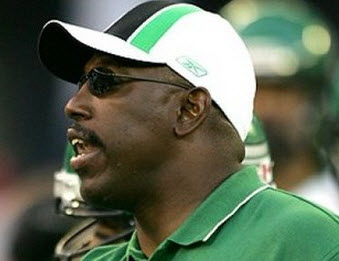 The first thought would be Danny Barrett.   Many Bulls fans were hoping to keep the run going and name Danny as the head coach when Turner left for Kansas.  Danny was hired in February of 07 as the assistant head coach and also had responsibilities coaching the QB's.

At the time of the hire the school sent out this statement:

What are the Pros of hiring Danny Barrett:

2.  From Florida and will be able to use his name and success at UCF to open the Florida recruiting pipeline.

3.  He wins wherever he goes.  He also helped Drew take his game to the next level as well as working with a very raw Zach Maynard.  Danny was a very successful QB at Cincinnati and then in the CFL and knows to coach QBs.

1.  Not to diminish the injury to James Starks but the 2009 team lacked focus and leadership.  Turner was busy being wooed by the media ESPN giving love to Turner, getting wooed by big time college footballs programs ~ Auburn, Kansas, Nebraska, and every other team needing a coach.  This team needed someone to drive the ship and that person could have been Danny.

2.  The schmooze factor.  Being able to schmooze the President at UB, hopefully some distinguished alumni, and have the smooth edge to win in the board room and on the field.  Does Danny have this side to him? 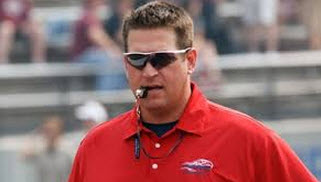 Aaron Stamn resembles career wise Coach Quinn Stamn at Kansas talking Turner Up. Aaron has been Turners right hand man starting at Nebraksa, at UB, Kansas, and now at Liberty. Aaron has succeed at every position he has coached.   It was Aaron Stamn who coached the special teams in the 2008 year and watch the International Bowl to see what his special teams were capable of.  Aaron is a very personable leader and very sharp.  Aaron would be a great ambassador for UB.  Aaron is currently the offensive coordinator for Liberty University.  That tells you how much Turner trust Aaron as Turner called all plays when he first arrived at UB.  Aaron has been a TE/Special Team Coach, Offensive Line Coach, Recruiting Coordinator, Assistant Offensive Coordinator, and Offensive Coordinator.

Pros of Coach Stamn at UB.

1.  Will be a great face for the program.  Will be an excellent ambassador for White to sell this program across New York and Southern Ontario.   Smooth in delivery and appearance and has a great demeanor.  Is the quintessential look for a head coach.

2.    Stamn is a detail oriented neat freak which is probably tough to be married to but a key component to success.  You can never tell until thrown under the weight but I think Stamn would be a fast study.

3.  Players love him.  Direct coach who knows how to motivate.  Connects with players and he respects them.  Would be a great person to help land top level recruits.

1.  Like Quinn, does Stamn have the bandwidth to be able to handle not just one side of the ball but the total team and all the constrains off the field.

3.  Stamn has early success at UB and he will be snatched up fast.  We understand that the MAC is the minor league equivalent for to tier football programs.  It is good to have a good run and fun to watch what an ex UB coach does at the next level but the back-draft of coach change up can have negative ramifications. 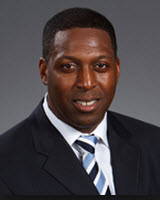 Juan Taylor was the wide receiver coach under Gill at UB and help create two receiving stars in Roosevelt and Hamlin. Juan was star athlete from the Canton area and is a member of the Hall of Fame (not the NFL one but the lesser known one in Canton) Taylor was a standout wide receiver at Kentucky State, a Division II program, where he earned first team Black College All-America honors and Team MVP honors as a senior. During the final three years of his playing career, Taylor led Kentucky State in receiving yards, receptions and scoring. He graduated with a degree in Criminal Justice in 1993. After graduation, he played professionally for the Milwaukee Mustangs of the Arena Football League.

Like Aaron, Buffalo is a special place for Juan.  Juan started a family in Buffalo.  Juan stayed on at UB under Quinn and the relationship did not work.  Juan was also provided the title of game day passing coordinator.  Juan hooked up back with Gill at Liberty.

Pros for Juan as UB's next head coach.

1.  The truth is this man should own 20 car dealerships and be ten times better than Billy Fucillo. He can flat out get you to do anything and does not need to use the word HUGE.  A master of motivation and pushing players beyond what they are capable of.  Juan is very polished and would be great for interviews and lectures.  Like Aaron, would be a great face for UB and for it's football program.

2.  Let's call it what it is.  I am not sure if you noticed in the picture but Juan is black.  The world of college football is lacking in providing head coaching positions for black assistant coaches.  The world of college football is loaded with black assistants with white head coaches.  UB could be progressive again and hire a minority coach.  You would not be hiring Juan because he is black but rather he is black and could kick the ass of the other MAC schools.

3.  This man can recruit.  His energy is infectious and he is natural born leader.  You can't but help but smile when  you are in the same arena as Juan.  Like Aaron, the players love him.  I would love to hear Lee and Nuetz's opinion on Juan.

1.  Also never was the man!  Never had to be the last voice.  Where Aaron is detailed oriented and maniacal on the smallest details, Juan would delegate.  Juan would be able to empower those around to get the job done.

2.  Same as #2 for Aaron.  Does Juan have contacts that he can bring to UB?  Could we see (and mainly hear) a Moose sighting in Amherst?  He cannot pluck great up and comers and spend a season build the trust and bond.   Would have to come to UB with a coaching staff assembled that he can count on.  With Juan providing more responsibilities to the assistants, he needs good coaches around him.

3.  Number 3 for Stamn applies in greater detail with Juan.  A hot young black coach who can recruit, build a program, win, and can be comfortable in a room full of old rich white supporters.  Would not take Juan long to move up.

First of all Quinn has to take the position at Notre Dame but I have had this feeling that he wet his beak at head coach and wants to back with Brian Kelly.   Secondly, I do not believe that Danny would go with Danny, Aaron, or Juan but would make for a great story.  All three have ties and many friends still in the area.  Expect White to make a Hurley like hire for the football program.

Let's see what news comes from Amherst and South Bend.