The 100th season of UB Football began where the 99th season ended, Columbus, Ohio. During the Season, the 99 for 99 Instant Classic will immortalize the best moment from the previous game.

With a dominant performance in week 1, the player every UB fan wants to see continue his form is...Alex Neutz? 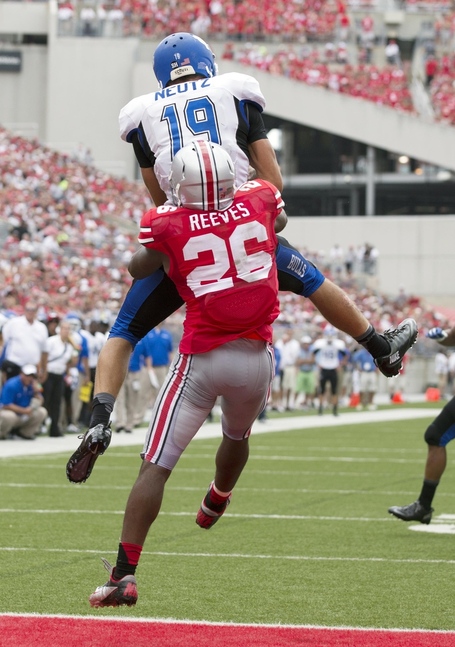 A classic Happy New Season prank, after all the hoopla over Mack, I've gone in a different direction. Can you really call a defensive performance classic when his unit allows 40 points? I'm giving it to Neutz.

Neutz grabbed 9 catches for 98 yards and a touchdown. This is impressive for four reasons:

In big games, Naaman had Jackson and Brett Hamlin (7 receptions 78 yards vs Penn State and Missouri) to make room for him to get open. In the 2012 Georgia game and the 2013 Ohio State game, only 3 passes were caught by a wideout not named Neutz. Dunmore and Lee combined for 3 receptions for 21 yards over two games.

Neutz's 98-yard effort against Ohio State represented his seventh highest output against a FBS school in his career (154 vs Morgan State 2012 is his high, 140 vs WMU 2012 is his FBS high). His 9 receptions tied his second best game for the fourth time (career best 10 receptions vs Pitt 2011),

What is that you say? OSU had backups at defensive back, well... Bonus point

There was veteran talent on the field, and Neutz.

The last receiver to catch more than 98-yards against Ohio State was Nebraska's Kenny Bell who gained 133 yards on 5 receptions on October 6, 2012.

The last receiver to catch 9 or more balls was Keenan Allen who caught 9 balls Zach Maynard passes for 80 yards on September 15, 2012.