Share All sharing options for: The Postgame Meal - Ohio State

The Postgame meal wraps up the game and gets you ready for next week. Some weeks you eat cupcakes, some weeks you are the cupcake.

Postgame Drink: A million dollars richer we could build facilities, or we could go with Million dollar bottle of Gout de Diamants champagne. I think we all know champagne is the answer.

Postgame Meal: Panda Express Orange Chicken tastes good, but is much worse for you than it should be. Leaves you hungry for more quickly. The OSU game left many walking away feeling good, but it was not good for us. But I think we can all agree it left us all hungry for more UB action.

Goes to Urban "Lane Kiffin" Meyer. He had to go for 2 twice. If it were not for the conversions the score would have ended 38-21. Conversely had UB stopped tOSU's conversions, it could have been 19-14 after the Mack pick-6 and a 36-21 final. I really hope they get Saban in the BCS game.

Joey aside, all accounts said OSU fans were great hosts.

Gotta give my away team game ball to Kenny Guiton, who came in cold and threw a TD pass when OSU was only up 10. If Guiton comes in and fails, UB might actually win this game.

I keyed on 4 things from the OSU game.

BO ran twice up the middle out of the wildcat (joined in the backfield with Jimmy Gordon? and Kendall Patterson) gaining 9 yards (4.5 ypc).

Outside of those two wildcat plays, BO had no success up the middle. BO ran 10 times for 15 yards up the middle (1.5 ypc). One of those runs was out of the pistol, a zone read play with Alex Zordich which gained 6 yards. In the 8 runs up the middle with Licata handing BO the ball, BO gained 8 yards (1 ypc).

Before we criticize BO, I'd question how we used him. In the future we will probably get better push up front, but next week, we face another young athletic defensive line. If UB can't find room up the middle, they need to quickly switch to stretching the play to the outside left and right, letting BO do what he does best, make cuts and find holes in space.

I have two criticisms of BO, first, he was a liability in pass blocking against OSU. When OSU sent 5, and UB left BO as the sixth blocker, he could not keep the pressure away from Licata. Secondly, BO ran twice from the 3 yard line. His first carry should have been bounced outside, his second carry he had a lane but was stopped short. I am not used to seeing BO get stuffed in short yardage, but he was a few times in the game. I am willing to give BO the benefit of the doubt because after all it was Ohio State.

The two best drives UB ran were #9 and #10, where UB threw the ball 10 times and ran the ball 12 times. UB needs to maintain balance, to keep men out of the box (to give BO room to run) and keep the double team off of Neutz (so Alex can be Alex).

In the first 3 quarters, UB converted 2 of 11, 2 of 6 running and 0 of 5 passing. Of the 5 passing attempts on 3rd down, Licata only competed one pass, and threw one interception. A big problem was the distance of the 3rd down, which averaged 12.4 yards. The defense was able to pin their ears back and pressure Licata which forced 4 incompletions, 1 quick throw short of the first down and 1 interception.

OSU converted 3 of their first 6 3rd down plays. OSU passed each time. On 4 of those 3rd down plays UB sent 3 men at the QB and dropped 8, OSU was 50% when UB showed that look. OSU was 66% when UB rushed 3 and dropped Mack into coverage, each time completing a pass for 8, 17, and 3 yards. When UB employed the same strategy but rushed Mack on the outside, Mack sacked Miller.

Twice UB sent an extra man. With a 5 man rush, OSU rolled the pocket towards Mack, and Miller converted with a strike on the run. With a 4 man rush, Nick Gilbo was able to beat the right tackle and strip sacked Miller. After that, OSU converted 3 consecutive: 1 via penalty, and two were 3rd and 1's converted by short gains on the ground. On OSU's 10th 3rd down from the shadow of their own end zone, UB sent pressure but LB Adam Redden lost contain, allowing Miller to scamper for a 41-yard gain that effectively ended the game. 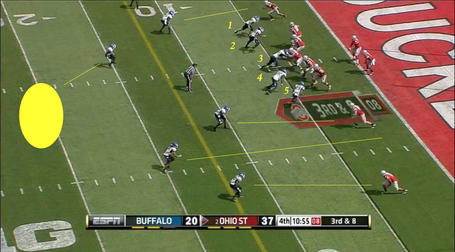 Redden moves too far upfield, giving Miller a lane to run past the 5 Bulls rushing and 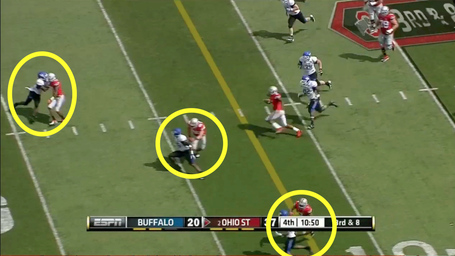 1) Devin Smith TD 0-8: Najja looked awful on the play, but it seemed to be a total defensive breakdown. 1) 4 man rush with Khalil Mack got no pressure on Miller. 2) There were 2 OSU receivers running free with Najja between the two. A better throw and Najja has no chance, Najja looked worse because if he was able to find the ball he could have made a play on it, but he was definitely at a disadvantage.

2) Chris Fields TD 0-16: Another blitz off the corner and another zone read play, this time Mack and the corner coming from the left side both crash hard to the fake inside allowing Miller to roll by them to his left. Najja had deep coverage and expected support underneath, which was not there, leaving Fields wide open.

3) The almost safety: UB rushed 5, Mack blew up his man creating a chain reaction of pressure, in my opinion, it was intentional grounding and a safety.

4) Jordan Hall TD 0-23: UB sold out in a pass blitz, 8 men in the box rushing off the outsides, once Hall broke the line, there was no one left to stop him.

6) Weiser TD 7-23: Ohio State played zone, but two OSU defenders incorrectly followed Neutz, and then fell trying to reverse direction to catch Weiser. Neutz is a zone buster if our tight ends can continue to find pockets of space underneath.

10) Finally, the big hands to the face, I think was at the least a hold by OSU and a hands to the face by, offsetting penalties and replay the down. I do not think the fumble would have stood up to replay as Millers forearm was down as the ball came out.