We almost had to eat it: Creepy Crow Claws, but a win is a win, and "only winners get wings" So we're supporting UB's best performer of the weekend, James Starks by eating at Green Bay's Legend Larry's, winner of 2013's best traditional medium and hot wing sauce at the 2013 Buffalo Wing Festival.

10 Factors to decide the game

Pregame: PIck your poison, Neutz will have a big day or BO will.

Postgame: Neutz was relatively contained, BO was sidelined. UB's offense was held under 14 points in regulation for the 4th straight game. UB's offensive line finally used their size to provide push in that final overtime.

Stony's hero was Malcolm Eugene, a former 3 star WR from Long Island who originally played for Temple in 2011, did not play against Buffalo that year, but came up big this year against the Bulls. The 6'4 receiver was targeted 3 times in the first half, catching 1 ball for 13 yards. In the second half he was targeted 9 times, catching 5 balls for 64 yards including the game tying touchdown. In overtime, Eugene was targeted 7 more times, catching 3 for 33 yards and a touchdown.

UB's defense actually did a decent job, allowing only 9 catches on 19 targets, and that is why Stony Brook only scored 10 points in regulation. Yet Eugene was the best player from NY in the battle of NY so...

Pregame: Coker with 3.91 yards per carry doesn't scare me, UB should be able to either drop back and suffocate the pass, or pin the ears and destroy the QB.

Postgame: With 2 sacks, ears were not pinned. Negron completed 67% of his passes in the 1st half, 50% in the second and 42% in the overtime. UB also snagged 2 INTs. Not a great day, but not a bad day. Coker was bottled up at a reasonable 3.4 ypc.

4) Bad Quote of the week

"There’s a buzz around Buffalo for this football game."

Although Buffalo's Joe Licata hit receiver Alex Neutz for six completions covering 197 yards and one touchdown last week at Baylor, Nakwaasah said the numbers were "inflated" because of the nature of a 70-13 loss.

There WAS a buzz around Buffalo and now it's gone. Questions now linger about UB's best player Alex Neutz after a disappointing 10 catch, 43 yard 1 TD performance. (Somewhere Roosevelt and Haddad) pop champagne as their records appear to be a bit safer this week than last). 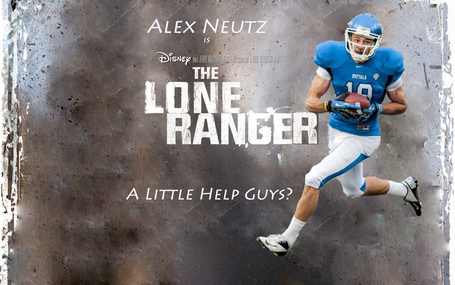 Buffalo: Alex Neutz - Caught 15 for 295 this year at Ohio State and at Baylor.

Neutz had 3 separate receptions against Baylor that were longer than his total output on Saturday.

Stony Brook: Jahrie Level - Caught 10 for 119 against Bowling Green as a member of the Idaho Vandals last year. Will see his first action as a Seawolf today.

Trying to contain my excitement for UB's showdown with Stony Brook.

props to stony brook for having the absolute shittest social life, worst parties, and for being fucking miserable 🙌

Winner: The Buffalo News: I assume Sullivan was being sarcastic, but he was right. THIS is now UB football 2013. We hired what seems like 10 great hype men to promote the games, but retained the guy keeping fans away, and we're just getting started. As the Great Samuel L. Jackson said best: "Hold on to your butts"

Pregame: 3rd down on defense

Postgame: UB stopped their first 7 3rd downs in a row, on average, it was 3rd and 10. Stony's first conversion came with less than a minute to go in the 3rd. Their 3 regulation conversions came from 4, 1, and 5 yards out. All in all a UB win if it weren't for two things:

Advantage: Stony Brook, if you think those things matter...

Postgame: Yea, all that.

Pregame: Buffalo: 5-4 probably closer than it should be, but UB will get the win.

Postgame: Buffalo 5-3-1 MUCH closer and longer than it should've been.