I don't want to talk about Baylor anymore, so Postgame Meal, 3 Goats, The Instant Classic and some Baylor Chalkboard talk will be combined into one post. Special thanks to the traveling Beau Bachtelle fan club, the Gilbo family that traveled down from upstate NY, the Licatas, Branden Oliver's Dad and the Sales family that knew Texas well enough to come prepared with a tent and lots of water to share, which helped me prevent spontaneous combustion on the grass tailgating field. Such a great group deserved a better final score.

Rudy's Beer selection left much to be desired for the California beer snob, so grab a Lone Star, previously the worst beer I've ever had, but on this go-round not so bad. The beer caps have visual puzzles. Between drinking and solving puzzles, it will be more entertaining than Buffalo at Baylor.

3) The Dangers - Our "safeties" really haven't earned that name, so I'm renaming them "dangers"

We have allowed a MAC worst 11 20+ yard passing plays,

There is nothing safe about UB's defense.

0:47 Baylor's 2nd TD was a short-yardage run, UB put 8 in the box and despite a missed tackle that was the true cause of the TD, my major issue is with both safeties, they fail to crash hard and both end up watching as the back squirts into the end zone. When was the last time you saw Troy Polamalu standing around on a goalline after the back scores. Whether you like to hit or not, on the goalline, your job is to get into that scrum and prevent a TD at all costs. Our safeties looked like they just wanted to go sit down.

1:04 Baylor's 3rd TD, again the safeties are the last line of defense as the RB breaks through the hole. One safety jumps out of the way, the other just jogs in and doesn't lay a hand on the running back.

UB's gameplan seemed to be about leaving our corners on islands with super fast receivers, and making sure those receivers had time and space to operate.

0:27 The first Baylor TD, 3 defensive backs covered 2 wide receivers on the far side, Khalil mack also rushed from the far side, setting up a huge advantage for Baylor on the near side. However, UB sent 6 men on the pass rush and had Adam Redden in press coverage with Najja Johnson supporting over the top we actually called the right play for this situation.

How it went wrong: Primarily Adam Redden blitzed off the corner, and Baylor was ready for it. The "hot" throw to a now open receiver was exasperated by how you cover a corner blitz: namely, Najja was sprinting towards the receiver instead of backpedaling with him. You backpedal because its easy to change direction, sprinting towards the receiver, all the Baylor wideout had to do was make a simple hesitation move, and Najja was unable to breakdown and change direction with the wideout, and he was gone.

Secondary problem: On the far side, our 3 defensive backs scheme took them out of the play: the slot defensive back played a short zone drop, the outside defensive back charged the slot wideout, and the deep defensive back, sprinted outside to cover the outside wideout. The deepest man on the field (previously known as safety) was running away from the play and in coverage, instead of in the middle reading the play and providing support. This needs to stop, we obviously need a safety to play the traditional safety role, as our defense is being destroy by the big play.

1:23 Baylor's 4th TD, UB sends a 3 man rush, and Mack beats the tackle, but the Baylor QB gets rid of the ball in 2 seconds. UB both played zone and refused to bump the wideouts at the line of scrimmage. As a result, even Mack's best effort is futile, as the Baylor wideout is free to run away from the corners and into the zone of linebackers. At that point he has space to accelerate. An awful angle by Najja Johnson and a WTF were you doing by Okoye Houston later, and it's an easy six points.

2:33 On this display of power and speed, Lache Seastrunk runs over a Bull, then breaks it outside and out runs the UB defenders. First look at the near side, Adam Redden and Cortney Lester, avoid the point of contact, and instead of assisting on a tackle, find themselves out of position and opening the lane for Seastrunk.

However, this seems to be a team problem and that's why I'm putting it on Quinn. On the farside, once the contact happens, all the Bulls stop, including Khalil Mack. In football there is a thing called pursuit, you run to the ball until you hear a whistle. UB did not do that, and UB does not do this anymore. This is the hallmark of a soft, lazy defense and I put that on the head coach.

I also criticize Quinn for putting in Alex Zordich, once again I love Z, for situation duty, but not running the team. I criticize changing QBs AFTER a scoring drive. Granted, after UB scored, Licata limped off the field as it seemed a Baylor defender banged knees with our QB. All indications during the game was that Quinn put Zordich in the game to spark the run game and give the defense more rest. Why did they need rest? They were barely on the field.

In addition, UB knew they matched up better against Ohio State than Baylor, but that didn't stop us from playing basically the same game offensively, and succumbing to the same game planning problems on defense. My only hope is we played vanilla on offense and defense to keep our best plays off tape heading into MAC play.

1:50 You hit the back on the spider 2Y banana Joe! If we're all lucky, you will one day sit across from Gruden and explain how you blew the play trying to make something big happen, versus taking what was there. Can't go broke taking a profit. The game was kind of out of hand when that happened, so it's only an honorable mention, but fumble there in MAC play, and you'll find yourself in the goat category.

Taylor was covered, but as Licata rolled right, Taylor's man released and pursued Joe. At that point Licata had Taylor wide open and should have thrown to him. His only other option was throwing it away. You can't fumble there. Licata can share this honor with Andre Davis, who totally blew his block, (Baylor only sent 4 on the play) and Jeff Quinn for calling a play that rolls away from Alex Neutz.

Instant Classic and the David Bowie "We Could Be Heroes but we weren't cause we lost" winner of the week goes to:

Alex "The Great" Neutz. His nickname just leveled up.

If he meets his projection, Neutz will finish 1st overall in career yards and TDs, 2nd in yards per reception and 3rd in receptions and 100-yard games.

The sad part is, he could have had more!

Baylor is not exactly the adjust and shut down the passing game type, as typified by their 70-63 loss at West Virginia last year. In that game, Geno Smith threw for 656 yards and 8 TDs, while WVU wideouts Steadman Bailey, Tavon Austin and J.D. Woods had 13, 14 and 13 receptions respectively for 632 yards combined.

Comparing the WVU QB and UB's QBs, it is clear that UB could have had a WVU night, they just needed to abandon the run and sling it. 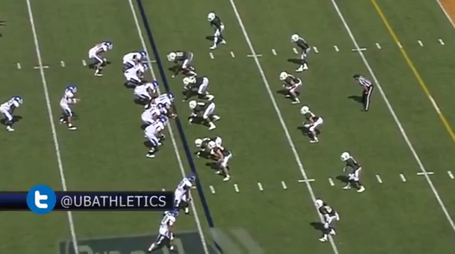 This is the pre-snap look at Baylor's defense before the Neutz TD reception. The safeties and the linebackers are at the same depth, meaning all 11 defenders are basically lined up between the hashes and within 7 yards of the line of scrimmage. This gives Neutz all kinds of room, and UB exploits the defense with a double post, one underneath and one deep. The safety decides to cover the underneath route, leaving Neutz alone with the corner, and Alex easily beats him for the TD. Neutz had 6 catches but he could have had 60 against this defense.