Share All sharing options for: MAC Tournament Round 1 - DoubleHeader Gamethread

Time to see just how deep UB Basketball can go in this years MAC tournament. Both the Men and the Women managed to get out of the play in round by winning at home and each team will take the court today in Cleveland.

The evening match-up the UB Men will take on the well rested Cardinals of Ball State. The Cards got a free pass in the campus round due to Toledo's exclusion from postseason play.

Lately these teams are heading in two distinctly different directions. While UB limped into the campus round losing four of their last five games Ball State surged into the tournament by winning seven of their last eight games. Their only loss since February 6th was a home loss to Eastern Michigan. Because of the Cardinals run it's safe to say UB's eraly season victory at Muncie is not a meaningful indicator as to how this game will play out.

But in that game Javon McCrea scored 24 points on 10-of-12 shooting, and Will Regan's played the hero by hitting 3-pointer with 12 seconds.

The Cardinals never trailed in the first half and the teams see sawed back and forth until McCrea put down a dunk with 2:41 to play. After Regan's late 3, Jauwan Scaife's 3-pointer with 2 seconds left pulled the Cardinals (7-10, 1-4) within 64-63 before Buffalo Tony Watson sealed the victory with two free throws.

The Cards are led by Second team All MAC guard Jauwan Scaife and Majok Majok a forward named to the ALL MAC third team. Ball State can also rely on Jesse Berry who was not honored on an all conference team but did put up more than 13 points a game this season.

In terms of pure numbers Ball State and Buffalo are so similar it's scary. The only real difference is that Buffalo blocks a bit better on defense and Ball State is good at sealing the ball away from their opponents. But those numbers should factor in the Card's slightly easier schedule in the West. The Cards SOS ranked 280th in the nation and they had just one game against Akron and Ohio where as the Bulls had two. The Cards beat exactly one team from the east, Miami.

But UB has had trouble playing teams with strong guard play and Scaife and Berry do give BSU something of a fairly strong set for Buffalo. UB's soft defensive play late in the game could be deadly against this team.

Buffalo will need Tony Watson II to snap out of his one game funk and give UB the deep threat which has keyed their improved offense improvement during the second half of the season. Still unknown for Buffalo is how the injuries sustained against CMU to MAC All Freshman Guard Jarryn Skeete and forward Auraum Nuiriankh might effect their play in this game.

Women Take on Miami (2:30 PM)
The UB Women are back in Cleveland for the first time since 2011. Buffalo is led by Freshman Mackenzie Loesing and sophomore Christa Baccas who each were given All Conference Honorable Mention last week. Buffalo who had won just two games out of conference started MAC play by going 5-2 before hitting the meat of the conference and settling to an 8-8 finish.

Miami and Buffalo each won a game in the other teams house with Buffalo striking first with a 78-70 win in Miami. Then a couple of Weeks ago the Redhawks came into Alumni and beat buffalo 69-56.

In Buffalo's loss UB opened both halves strong but were undone by by a shooting percentage of just 36 and 20 turnovers that Miami turned into 23 points. UB was also out rebounded, most painfully on the defensive glass which led to 18 second change points for the RedHawks.

UB has shot poorly all season but it was the turnovers and second chance points that were out of character for UB. If the Bulls are to get past the first round for the first time in a decade that will be the key. Rebound well and take care of the Ball. 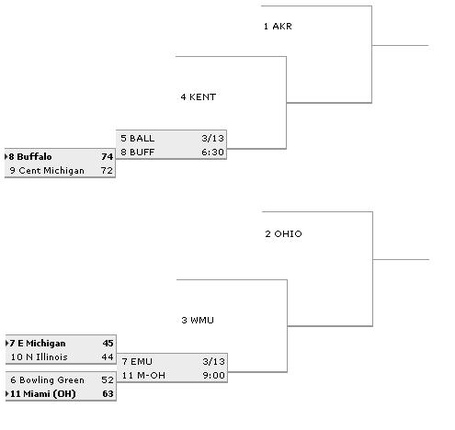 Ball State and Buffalo by the numbers! 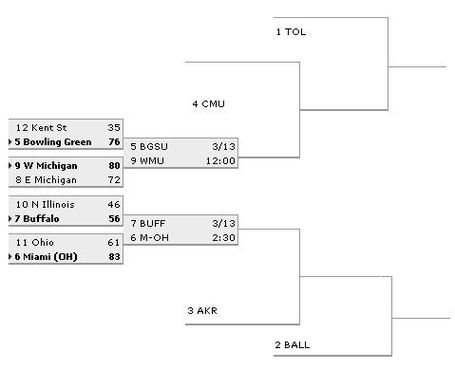 Miami and Buffalo by the numbers!