Share All sharing options for: The Postseason Meal: The 2013 Buffalo Bulls - Part 2

The Postseason Meal will have to sustain us all until the Bulls return in 2014. The goal of the postseason meal is to Hydrate, Nutritionate and Reflect on the season that was. UB Football was record breaking in 2013, but so was UBBullrun. Only difference is UBBullrun has no talent cliff, and you never have to graduate.

This team is too talented to lose to Stony Brook right? Coming home for the first time after playing annual sacrifice to a few of the best teams in the nation, it was UB's turn to beat up on someone. While the defense was game to beat up on the Seawolves, the offense was content with beating themselves. Up 10-0 behind an Anthone Taylor run, Taylor played in place of injured starter Branden Oliver, UB's defense started to wear down, while UB's offense failed to find rhythm.

Reminiscent of the Ball State game almost two years earlier to the day, Buffalo's defense could not prevent Stony Brook from scoring on the final drive of the game. Unlike the Ball State game, the late TD tied the game, and fortunately the reeling Bulls defense was not forced to stop a two-point conversion for the win.

Traditionally, an under matched team will try to seize momentum and play for the win, lest the superior team regroup and dominate in overtime. After two field goals and two touchdowns, Dwellie Striggles intercepted Stony's Lyle Negron to give Buffalo a clear path to a victory.

However the Bulls' Taylor fumbled to end the third overtime and Licata threw an interception to open the fourth overtime. Stony Brook conservatively drove to the 20 before attempting a game winning field goal, but it was missed. Stony opened the fifth overtime by driving to the 8 before kicking a 25 yard field goal. In the fifth OT, Buffalo was finally able to find the end zone on an Anthone Taylor 6-yard Touchdown run, snatching an embarrassing victory from the jaws of defeat.

Perhaps a distant memory now, but in the wake of the signing of the Quinn extension, the "New York Bulls" initiative and the blowout at Baylor, this game and the overtime was a real turning point for UB football in 2013.

Comments of the game:

...he's undefeated in games where we score more than the other team 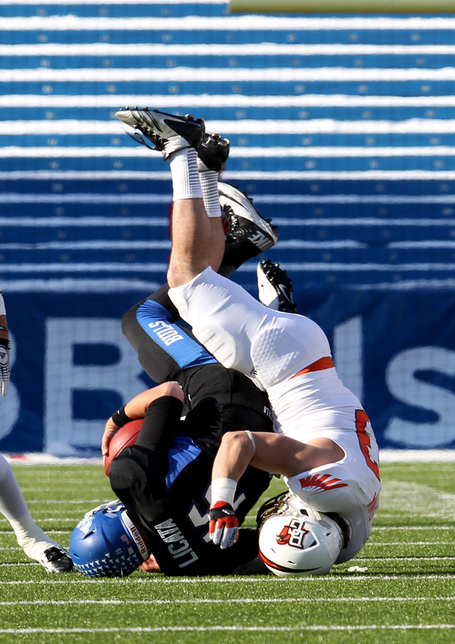 In the first quarter, the Bulls offense was outscored by 29, although they scored 2 more points than scored against against MAC schools. Buffalo's offense scored 27 first half points in their 4 losses COMBINED. UB had as many points in the 4th quarter against Toledo alone.

This may not have been an issue if Buffalo was a 5 wide spread team with the ability to score 27 in every quarter, however at it's core, the Bulls are a defensive team with a power run game. A fast start by the offense means obvious passing downs. Obvious passing downs means Mack blitzes (or 3 man rushes). Mack blitzes mean turnovers and pain for whoever is in Mack's way.

Mack was a beast in the Ohio State game, making him the #1 target on every opposing teams scouting list. In the three subsequent losses, Mack recorded 0 sacks, 0 interceptions, 0 forced fumbles, and only 1 QB hurry. In those three games, which made up 25% of his season, Mack recorded 31 tackles or 33% of his season output. So Mack was never shut out, or invincible, but the slow offensive starts effectively made Mack a down the field tackler, instead of a behind the line destroyer.