Share All sharing options for: The Jesse Hall Memorial Cake Eaters of 2013

What do Toledo, San Jose State, Western Kentucky, Central Michigan, Florida Atlantic, Louisiana-Monroe, South Alabama, Troy and Texas State have in common? All 9 teams are mid-major teams who are bowl eligible yet not going to a bowl.

In the meantime, we hear complaints that there are too many bowl games and that games with mid-major teams are poorly attended and boring to watch. I offer a simple solution: Mid-Majors should stop scheduling games with Major teams.

This year 20 AQ teams sneak into bowl games despite winning less than 6 games against equal competition.

A Major schedule usually consists of 3 to 4 home games against inferior competition. Starting the season 3-1, major teams only need to finish 3-5 against their peers to become bowl eligible. Unlike mid-major teams, 6-6 is usually good enough to get into a bowl.

This year 20 AQ teams sneak into bowl games despite winning less than 6 games against equal competition. These 20 teams ended the season a combined 6-57 against the final BCS top 25 programs. With seven-figures being paid in exchange for "easy-win" games, mid-majors continue to schedule those games. As the system will not change, the Jesse Hall Memorial Cake Eaters List will serve to shame the Major teams who feasted on cupcakes all the way to a bowl.

Cupcakiest Teams of the 2010's

The list was named after Jesse Hall, the great token black of Mighty Ducks 1 (and to a lesser extent D2). For what he lacked in hockey skill, he made up for in his hatred of cake eaters. I am Jesse Hall, We are all Jesse Hall. 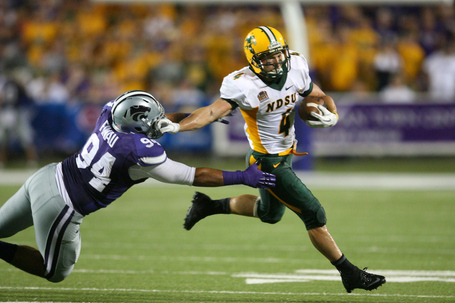 "Ah we've got a game against NDSU, so I'll talk to you right after we win!" via Scott Sewell-USA TODAY Sports 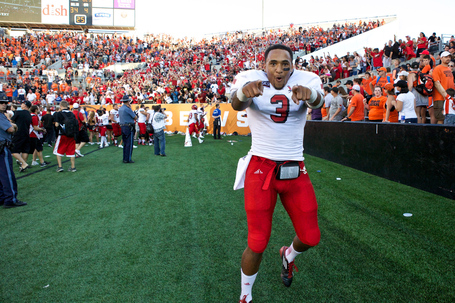 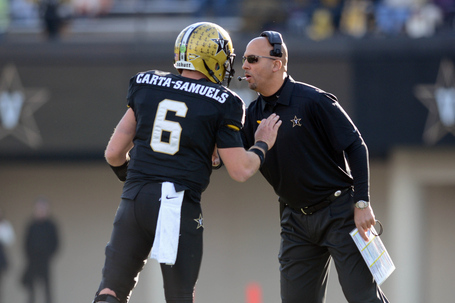 "What the heck kinda throw was that? That's my knuckle-ball. It's hard to be accurate but it drives corners crazy!"
via Randy Sartin-USA TODAY Sports

Vandy is 8-4 and hails from the mighty SEC, yet they find themselves on the cake eater list for their inability to beat quality opponents. Vandy swept through their uninspiring non-conference schedule of: Austin Peay, UMass, UAB and Wake Forest, but against the best Vandy was equally uninspiring. Vandy went 1-3 against the BCS top 25, and 1-4 against top 50 teams. Those 5 top 50 teams were the only bowl eligible teams Vandy played all year. Vandy's saving grace, a win over Georgia. 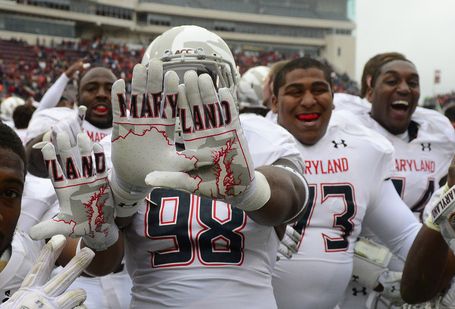 The University of Under Armor finished 7-5 with 5 wins against major opponents.  Maryland was 0-2 against BCS teams, 1-2 against top 50 teams and 1-4 against bowl teams. Their non-conference schedule turned bad as WVU and UConn were awful, FIU was awful, and they cherry picked a win over transitioning to FBS team Old Dominion. 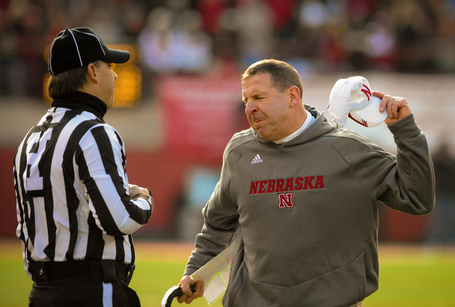 You don't want to be the guy to tell Pellini that you're out of cake. via Eric Francis

The fighting Pelini's get credit for scheduling UCLA, but get no love for losing most of their quality games. Nebraksa was 1-4 against Bowl teams, and schedule 8 home games, despite having a 12.5% better winning percentage on the road. Pelini REALLY hates the Nebraska fans. 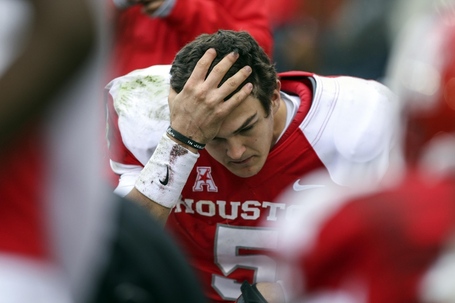 Hit the post on the triple deke, which is really hard in Football. via Troy Taormina-USA TODAY Sports

The AAC's one year of major football was a good one, with teams like UCF and Louisville playing BCS level football and with loyal UCF prevailing over the Cardinal traitors. However, the success at the top meant there was a ton of failure at the bottom (paging Temple and UConn). Houston, a tough 8-4 squad lands on the cupcake list due to their failure to beat a top 50 team. Houston was 0-3 against the top 50, and their best win happened to come against rivals #69 Rice, who just happened to be really good this year. 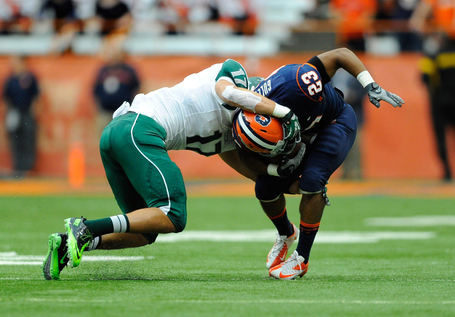 "2 minutes well worth it." via Rich Barnes-USA TODAY Sports

I hate to put Syracuse on this list, oh wait I love it. No one is more cake eater on and off the field than the University of Syracuse. Syracuse only managed 4 major wins, and those all came from outside the top 50 teams in the nation. Syracuse was 0-3 against top 50 teams and 3-4 against Bowl teams. They also lost to Penn State who while bowl eligible is not a bowl team. They truly are New York's team, ask Wagner, the 3-8 Staten Island FCS team Syracuse needed a win over to ensure bowl eligibility. 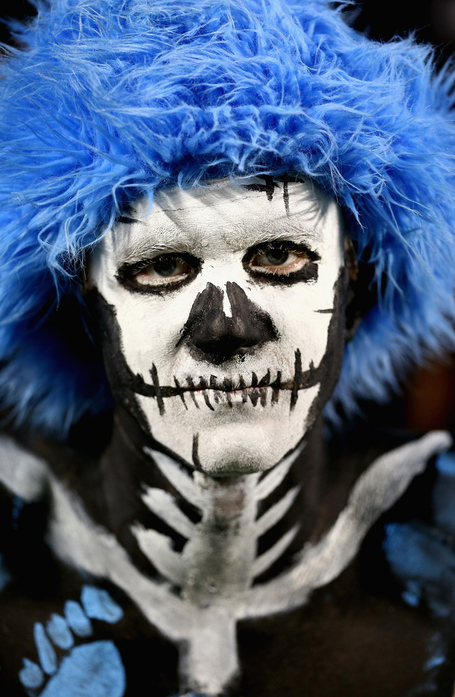 "I hate kids. they're barely human." via Streeter Lecka

UNC lost to mid major ECU, which put the Heels on the brink of missing a bowl. At 6-6, UNC played 9 bowl teams, but finished 3-6 against those teams, and 0-5 against top 50 teams. Both UNC and Syracuse enjoyed their best victories against #58 Boston College, the 2013 "Icing on the cake" award winners for best team to lose to the most cake eaters. 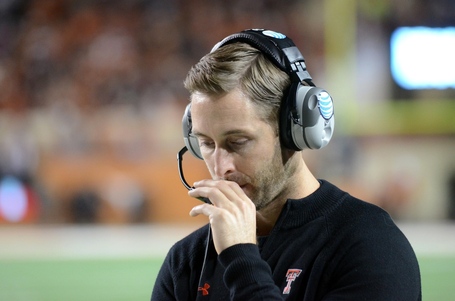 Apparently you can out-train a bad diet. Last year I assumed Coach Kliff Gosling would do away with the cupcakes as not to threaten the eight-pack abs, yet here we are. Kliff went full Zook, scheduling cupcakes early, going undefeated getting ranked, then losing all the rest of your games (never go full Zook).

All 7 of Tech's wins were against teams out of the top 50 and teams that won't be going to bowl games. All 5 of Tech's losses came to top 50 bowl eligible teams. 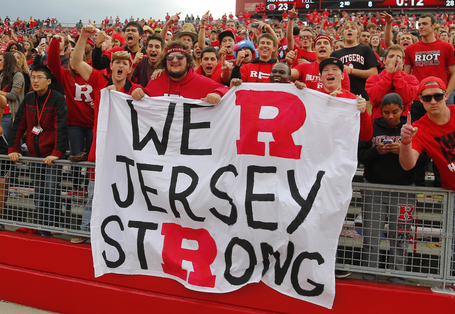 Rutgers was really bad. The team snuck into bowl eligibility and although unable to unseat the 4-time cake eater award champs, they gave them quite a run for their money. Rutgers:

1) Lost to a mid-major: Fresno State

5) Their best win was the lowest ranked best win of all 20 teams, against #80 Arkansas

6) Had the highest disparity between home and away win percentage: winning 71% at home, and scheduling 7 home games, while winning only 20% on the road, playing 5 road games.

Really ESPN 6-6 Rutgers and irrelevant ND is the highlight? pic.twitter.com/Nx3vqvy3na

The Winners and Still Cake Eater Champions of the World 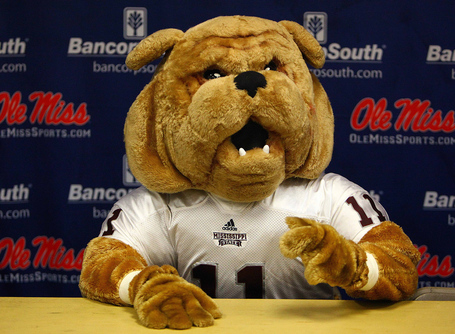 "I'm insulted by that, Frank, you have no idea how low I can stoop." via Spruce Derden-US PRESSWIRE

Mississippi (State) had a high home/away winning disparity playing 7 home games winning 71% while only winning 25% of their 4 away games. Their best win was against #27 Bowling Green, which was a 1-point win at home. When your best win is a MAC win, and you are not a MAC team, you are a cake eater.

Mississippi State fans will complain about this, because they play the difficult SEC West schedule and they have a point. Miss St. played 8 bowl teams (winning 2), 8 top 50 teams (winning 2) and 6 BCS top 25 teams (lost each), a very difficult schedule.

There you have it, Miss State cowbell clangs their way to an unprecedented 4th straight title. Can they make it 5? With games against Southern Miss, UAB, South Alabama and UT Martin on the slate, I think they're going to give it the old college try.

Until next year, I leave you with the illustrious words of the incomparable Jesse Hall:

Yo dude! You obviously in the wrong hood. This is my dominion, and it's a drug free zone. You understand? Now I'm feelin' generous today. So I'm gonna let you get your sorry vanilla booty out of here before we be usin' your eyeballs as hockey pucks!