The Early Line Odds and the First Bruwpeg Pick!

Buffalo in the opening line is the favorite for the Famous Idaho Potato Bowl. Fine the line, odds, and my pick which I know all fans have been waiting on pins and needles for.

Share All sharing options for: The Early Line Odds and the First Bruwpeg Pick!

Buffalo and San Diego State have started preparing for the game at Bronco Stadium in Boise, Idaho on December 21. So has Vegas. The weather could be a factor.  Current high temperatures have been hovering in the single digits but as Buffalo fans know the weather can always change.  The Aztecs sit at 7-5 (6-6 ATS) on the season; in comparison, the Bulls are currently 8-4 (8-4 ATS).

My Bruwpeg (I love shameless plugs ~ Click here to enter pick) official pick is 34 – 22 with UB winning this game. Buffalo will cover spread and the game will go over. OK, now let's look at the numbers like the experts do.

The point spread for the Famous Idaho Potato Bowl has been released.  Buffalo is a -3 (a three point favorite) and an over under of 52.5. The point spread has a projected final score of 28 – 24 for the Bulls.  The "experts" on line have this game as their lock of the bowl season going UNDER.  The past two prior Potato Bowls played UNDER the total. Looking to wager on the totals? San Diego State is 6-6 OU, and Buffalo is 8-4 OU.

In their last action, Buffalo lost a MAC East Championship game 24-7 quasi at home (Played in the stadium of the Buffalo Bills) against Bowling Green. UB failed to cover the 3.5-point spread as underdogs, while the combined score (31) was profitable news for UNDER bettors. San Diego State was manhandled by UNLV their last game of the season 45-19.  Needless to say SDSU did not cover

How They Match Up: 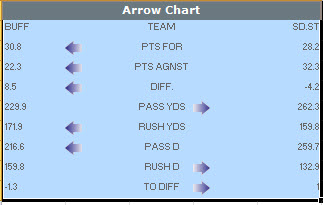 On the defensive side, UB has the No. 85-rated front 7 in terms of stopping the run, allowing 198.17 yards per game when on the road. San Diego State, on the other hand, rates No. 81 generating rushing yards at home. San Diego State's No. 70-ranked offense, averaging 28.17 PPG, against Bulls ranked No. 28 at 22.33 PPG. The Aztecs average pass game is averaging 262.25 yards per game, which is less that Buffalo’s secondary allowing 216.85 yards per game through the air.

Handicapping models project a 34-22 result in favor of the Bulls. 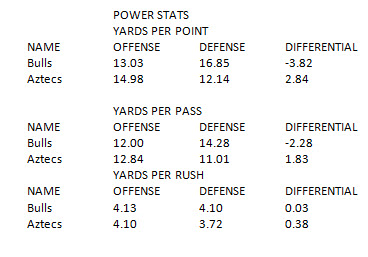 How the two teams have treated the betting folks this year: