Share All sharing options for: Ohio vs Buffalo: quarter by quarter analysis

1st Quarter: Six drives = six punts.  Nothing like a good old fashioned slugfest to kick off #MACtion.  Of course I'm joking… or am I?  Both defensive lines are really playing well as neither team can get much going. A few penalties have cost both teams thus far.  Khalil Mack has been the best player on the field thus far, as usual, with multiple quarterback hurries.  Ohio ends the quarter with the ball inside the Bulls' 30 yard line.

2nd Quarter: Buffalo kicked off the second half with a defensive play, something they've been accustomed to all season.  Khalil Mack forced, and recovered a fumble for the Bulls at their own 28 yard line.  Six plays, and 72 yards later, Branden Oliver rewarded the defense with a 2-yard touchdown run, his tenth of the season.

Another UB drive was halted after Licata's deep ball was picked off in the end zone by Travis Carrie.  The Bobcats got on the board with a 23-yard field goal late in the half after two iffy UB penalties kept their drive alive.  Both teams' offense struggling while the front's of each defense are thriving.  Bobcats will get the ball to open the half.

3rd Quarter: Branden Oliver is playing with the xbox controller way too much in this game.  It's just video-game move after video-game move on this Bobcat defense.  He now has two touchdowns in the game, the eighth time he's had multiple TD's in his career.  Unfortunately, the third quarter was highlighted by a terrible call by the referees.  Just 1:11 into the quarter, Ohio quarterback Tyler Tettleton dropped back and was flushed nearly 20 yards back near his own end zone.  He released the ball at his four yard line and the ball sailed out of bounds.  Intentional grounding was the correct call, as the ball never made it back to the line of scrimmage.  The referee also deemed the play a safety which was not only incorrect, but disgusting.  Have a look for yourself... 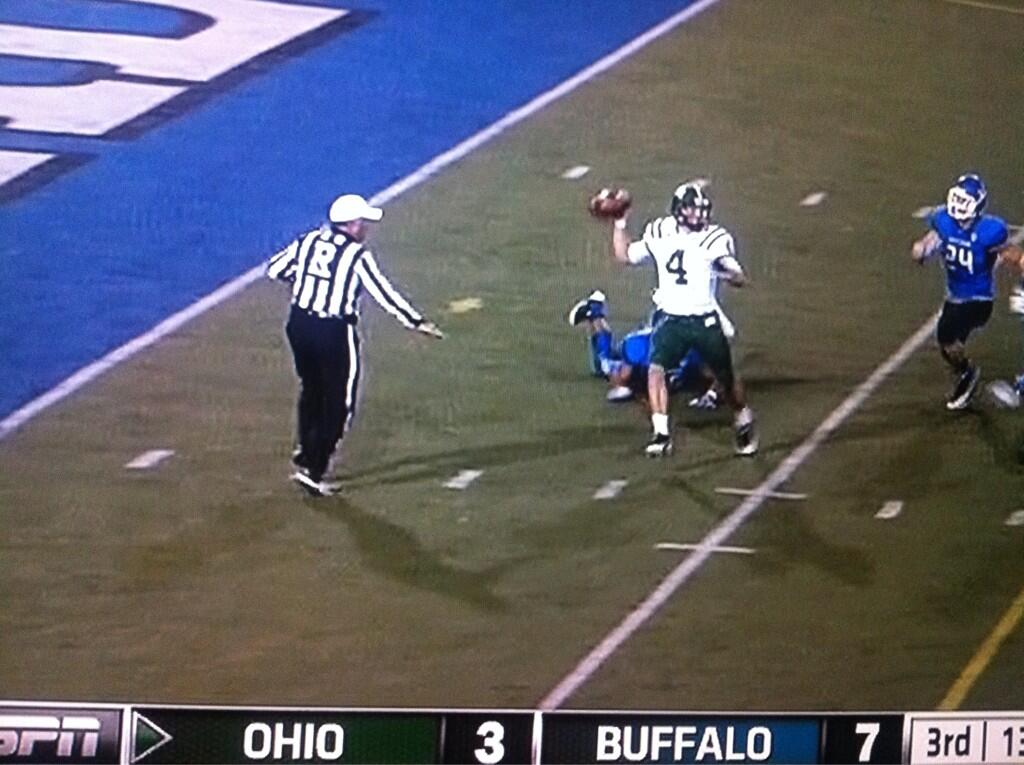