Share All sharing options for: All Hail the CFL Champs and the New Traveling Canadian Champion of College Football

The Saskatchewan Roughriders (spelled it right on the first try, thanks CBC) won the CFL championship in impressive fashion last night 45-23 from the Hamilton Tiger-Cats, who at least still has steel. Saskatchewan features Darian Durant former UNC QB but is also supported by backup QB from Buffalo Drew Willy.

Willy put in his most important performance in July, starting for Durant in a game against Hamilton, Willy was 14-for-25 for 269 yards and 3 touchdowns leading the Roughriders to a 32-20 victory. Willy did not see action in the game, but we were one QB injury each away from a Drew Willy-Dan LeFevour Grey Cup matchup.

The Baylor Bears long tenure is over. The Oklahoma State Cowboys are now Canada's team. When I think of Oklahoma State I think of Orange, Oil, and Coaches who are both men and 40. The British Columbia Lions wear Orange, BC is known for their Oil, and the Lion's coach is a man aged 45 years. 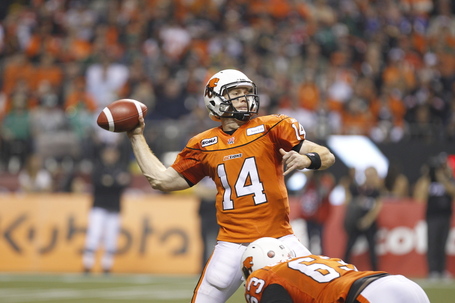 Buffalo may be able to bring the Canadian Championship back where it belongs: if Oklahoma State meets NIU in the Fiesta Bowl and NIU gets the win, and if at some point NIU is on the UB schedule in 2014... However I think we'd all prefer it if NIU didn't make it to that Fiesta Bowl.