There's more to Buffalo sports than UB Stadium and Alumni Arena! Your guide to the rest of the Athletic Department. Volleyball returns from a two-week road trip, Men's Tennis heads to Yale for regional championships, and Wrestling kicks it into gear.

Hi all! As you may have noticed from this week's Last Bull In webcast, I've joined the team here at Bull Run beyond my presence in the comments and off the to side in the FanPosts. Of course, with great moderate power comes great moderate responsibility, so I'll be taking on the Non Revenue Roundup, which you can now expect weekly. Even in the driest parts of the athletic year, while we may move to a biweekly schedule, we'll make sure to keep you updated on all UB sports. 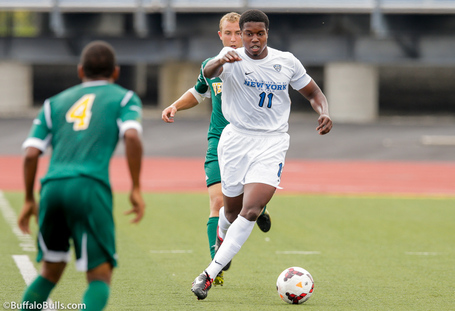 Sophomore Marcus Hanson scored the opening goal in a 2-1 victory against Hartwick. Photo via www.buffalobulls.com

Rowing Competes at Head of the Housatonic - Buffalo Athletics

Crew will complete its fall schedule at the Head of the Schuykill near Philadelphia on October 26th.

Cross Country
Cross Country heads this weekend to the Princeton Invite, their last meet before the MAC Championships in early November. Two weeks ago the UB harriers rode the momentum from their UB Stampede victory to middle of the pack finishes at the Paul Short Invite in Bethlehem, PA. Coach Mitchell was hoping for more but acknowledged that less than ideal weather affected the running of the Bulls;

"With the temperatures in the 90's it was a very hard race for our athletes today," stated Vicki Mitchell. "Zach Ahart had a great race, running his best time on this course."

Bulls Take Down MAC Leader Hartwick - Buffalo Athletics
The win over Mid-American Conference front-runners moved Buffalo's record this season to 2-8-3, 1-2 in the MAC.

Next Competition: Buffalo takes on national powerhouse Akron - if you forgot they won the 2010 National Championship, plenty of folks will remind you - as part of a women's - men's doubleheader on Friday. The men are set for first whistle at 7:30.

Women's Soccer
Last weekend, the Women's Soccer team lost a pair of 1-0 matches at home to Kent and Ohio. GK Ainsley Wheldon saved 12 of 14 shots she faced over the weekend, but the team was unable to score in either match. The Bulls continue their homestand on Friday at 5:30 against Bowling Green in the first half of the Soccer doubleheader.

NORTH TONAWANDA, NY - The Buffalo women's tennis team continued a strong Fall season over the weekend, competing in a trio of hidden dual competitions in the Niagara Invitational. Hosted by the Purple Eagles, the Bulls went undefeated in 27 different matches between singles and doubles play against Merrimack, Hampton, and Niagara.

Both the Men's and Women's Tennis team are headed to Yale this weekend for the USTA/ITA Northeast Regionals, which will be live streamed at http://www.streamingtennis.com/ if you catch the itch.

Volleyball
Volleyball is coming off a (10-25, 25-22, 25-21, 25-17) win at Miami which moved them to 3-3 in MAC play. Tahleia Bishop and Liz Scott both had double-digit kills, while Dani Reinart and Taylor Pritchett set up the attack with 20+ sets apiece. Libero Kelly Svoboda held down the D with 23 digs.

The ladies are home for the first time in two weeks for two matches this weekend. They host Northern Illinois on Friday and a thankfully Fleck-less Western Michigan on Saturday:

BUFFALO, NY - Returning to Alumni Arena for the first time in two weeks, the University at Buffalo volleyball team will be holding its annual Dig Pink game on Friday night against Northern Illinois.  The arena will be decked out in pink, from the players right up to the lines on the game floor.  The match will begin at 7:00 pm. During the intermission, the volleyball team will honor breast cancer survivors and through out the event facts about breast cancer awareness and research will be given over the public address system.

In out-of-season news, you better believe that John Stutzman is excited for his team's upcoming Wrestling season: