In Defense of Brent Musburger

I think creepy old guys are as funny as the next guy but....

Share All sharing options for: In Defense of Brent Musburger

I'm no fan of ESPN commentators they really are only palatable if you happen to be a fan of a team they to worship / cash in on. After Kirk Herbstreit's ridiculous temper tantrum I, as much as anyone, would relish the chance to run an ESPN personality through the ringer but what Musburger did was hardly offensive.

I'm a tiny part of the "New Media" but for me it's only a hobby that I am fortunate enough to be involved in. I have a tremendous amount of respect for my fellow authors at SBNation for their gifts, and their strength of character. At times though they take up something as a cause which was at worst a poor choice of words.

While Notre Dame was getting shellacked the ESPN crew desperately looked for something else to talk about, then the cameras turned to Katherine Webb, the girlfriend of Alabama's Quarterback and the reigning Ms Alabama. 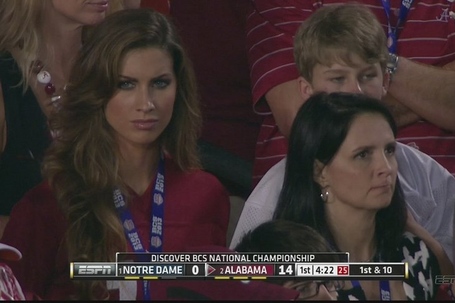 Now I am a very happily married man in my mid 30's. I am long past the point where something as simple as a pretty face starts my loins on fire. That being said she is quite stunning and if her personality matches her face then A.J. McCarron is indeed a very lucky man.

Well here is what Brent said:

"Now when you are a quarterback at Alabama, you see that lovely lady there, she does go to Auburn, I want to admit that, but she's also Miss Alabama and that's AJ McCarron's girlfriend, OK," ESPN broadcaster Brent Musburger said Monday night as the camera focused on Katherine Webb in the stands.

"Wow, I'm telling you, quarterbacks -- you get all the good-looking women. What a beautiful woman," he gushed. "Wow!"

He called her lovely and good-looking. That's hardly crude speech. It made for some truly amusing twitter comments and I get that. The game was so out of hand that any diversion was welcome, especially for Notre dame fans.

Some however woke up the next day and decided a gross injustice had been performed. That Musberger was some lecherous old man who dehumanized Ms. Alabama by saying she was pretty. I'm relatively certain that if a girl is both attractive and motivated enough to become a Ms America candidate she has heard that she is pretty a few times here and there.

Bill Hanstock, one of the awesome writers here thinks this is a problem?

ESPN's Brent Musburger apology, and why accountability matters - SBNation.com
So yes, Musburger's comments are part of a larger problem, but an apology -- and someone being held accountable for acting inappropriately -- are precisely how we can begin addressing that larger problem. Musburger made comments that made a great many people uncomfortable. Was he spurred on by the production team and the framing of the broadcast? Absolutely. But a faceless production team can't be tapped for an apology. It doesn't make immediate sense to anyone -- nor does it do any good -- to say "Hey, sorry we picked a problematic camera shot."

Very well written, concise, and through probing article. I think on the whole it's well worth the read, but it's also dead wrong. If the camera panned to his average looking girlfriend and she was a 4.0 in med school would a comment about how he look to marry up have been offensive?

And it's not like the production team rolled up footage of her swimsuit competition and played in picture in picture. It was an innocuous face shot which seems like something because it was focused on a beauty queen.

If he had an average looking mom who worked double shifts to send him to football camps as a prep can we talk about that?

My daughters are stunning, they get it from their mom 100%. And if some day someone observes that they are lovely and good looking I'll hardly take that as a slap in the face.

For what it's worth neither does Webb.

"I think the media has been really unfair to (Musburger). I think if he had said something along the line if we were hot or sexy, I think that would be a little bit different. The fact that he said we were beautiful and gorgeous, I don't think any woman wouldn't be flattered by that. I appreciate it, but at the same time I don't think I needed an apology." -- Katherine Webb

So let it go, you might have a daughter some day and if someone tells you she is lovely take it for what it is, a compliment.