Is it me or does the Big East look more attractive than it did yesterday?

Is it me or does the Big East look more attractive than it did yesterday?

Share All sharing options for: Is it me or does the Big East look more attractive than it did yesterday?

I know, I know.... Just when you think I'm done talking about this I bring it back up. I feel the same way, just when Im ready to say I want no part of the Big East something happens to make me think twice.

Confirmed: Boise State staying in MWC - One Bronco Nation Under God
So, what would drive such a change of heart? Well, for one...the league—just like the MWC—is NOT the same one we agreed to join. Pitt and WVU are gonezo and Louisville and Rutgers are on their way out as well. Geographically, the MWC has always been a much better fit for the Broncos, but the TV deal has always stunk on ice...well maybe no more. As part of their negotiations to remain in the MWC, Boise State will apparently keep their home TV rights. Mountain West will get the revenue...but Boise State's share (and that of its conference mates) will be bigger with Boise State negotiating home TV rights outside the MWC's TV plan. Oh...and that "no blue on blue" rule? Yeah, that's gone too. Looks like Boise State was able to get the concessions they wanted to remain in the league.

Boise is out and word is that San Diego now wants to go with them. It's also reasonable to assume that Houston and SMU could also easily be lured away by the Mountain West.

So where does this leave the Big East? Oddly it leaves them with a chance to build a coherent group of like minded institutions in a geographically sensible area. No way can you get as compact and stable as the MAC but you can build out a nice footprint.

Look at the current members

You have South Florida, Central Florida, Memphis, ECU, and Tulane.In the North you have UConn, Cincinnati, and Temple. Thats five in the south and three in the north. The Big East can now surgically add teams to strengthen the conference. Perhaps you mange to hold Houston and Tulane and there is a good seven team southern division. If they leave pick up one Texas School for a presence in the state and then seek out another south school for seven teams.

Forget current strength in any particular sport. Those things come and go with the natural tidal movement of college football. If Notre Dame can lose a decade than anyone can, that's just truth.

If it were my job to rebuild the Big East I would look for large state schools in the eastern timezone who somewhere near a top 50 market.

UMass seems a good choice if you can get them to commit to getting their on campus digs up to 30-45K. Buffalo could be a natural addition to that. Buffalo in a division with Cincinnati, UMass, Temple, and UConn? Institutionally and in terms of our Alumni base there would be no better match in college football.

And there are still three more schools to be had.

Try to attract Delaware and Bring in Marshall and ODU and suddenly you have schools in the following states. 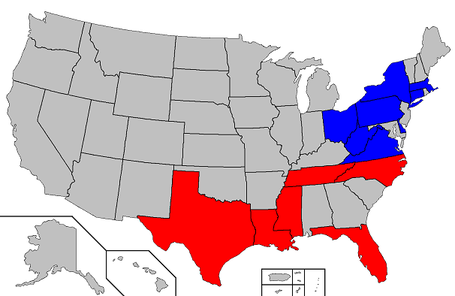 I know that Cincinnati and UConn have to be choking on this but they are running out of candidates very quickly.

As a Buffalo fan I can see no way, outside of the power conferences, that Buffalo can set up a better divisional schedule with which to engage students and please the alumni bases in the New York and DC areas.