My Weekend in Athens

Share All sharing options for: My Weekend in Athens

In order to experience joy, you have to experience sadness. This was the central theme during my trip to Athens. Athens was a town so content with everything else; it seemed football was just their cross to bear. They did not live and die based on the outcome of the game like the folks in Alabama. Not to say Athens on gameday was not impressive, the day was probably perfect. Athens delivered perfectly prepared tailgates, perfect girls in perfect red sundresses and a perfect performance, (if you ignore the talent disparity between the two teams which many of the fans did) by the home team. It was the Stepford Tailgate. I prefer a bit more chaos, I am from Buffalo and I have learned what Seal tried to teach us in 1991, you never survive without a little crazy. In the end, the only crazy I experienced was the crazy heat, and the surprisingly adequate play of the Bulls.

Panoramic View of the Stadium Pre-Kickoff

When one experiences sadness all the time, one tends to find happiness in the little things. Little things like a thirdSEC stadium to cross off the to-do list, earning $975,000 for UB athletics, getting down on the field and into the locker room, and the team showing some signs that this season just might be okay. The game provided a rare "loss-ebration," the Bulls lost 45-23, but no one in Blue was sad as they walked out of Sanford Stadium. 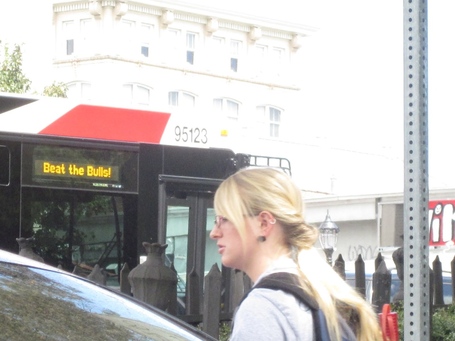 On Georgia's campus, the LED display on campus buses displayed a "Beat the Bulls" message. It was the only trash talk we saw or heard all weekend. The game had the atmosphere of a Spring Game. The heat could have been the culprit, a grueling day even for native southerners. The heat peaked at 97 degrees, with humidity between 55% and 67%, although the sweat stains in my blue button down seemed to indicate a higher humidity level than the official record indicated.

The game started with no flying "War Eagle", no "Power T", just fans barking with all their might for their Dawgs. The actual Bulldog, (Uga somehting) said "F this" this and stayed in the shady part of his air-conditioned doghouse for most of the game, he is a smart, smart dog. Buffalo's blue corner of Sanford Stadium clashed against an uninterrupted sea of red, but the Buffalo crowd was smaller than I expected. I anticipated a large group of UB transplants living in the economic capital of the south, Atlanta, would make the 70 mile drive to Athens. 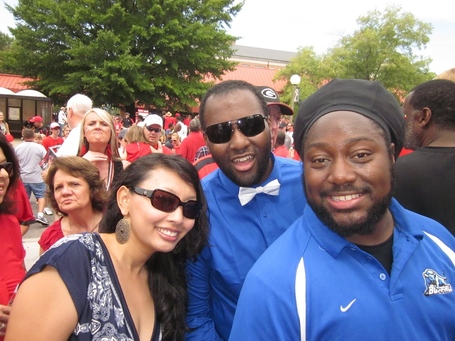 Kickoff starts, and College Football season finally begins. GOOOOOOOO DAWGS, SIC ‘EM WOOF WOOF WOOF WOOF is screamed as seven months of anticipation explodes with the kick. Buffalo drops the kickoff in the endzone and the UB returner falls on it for a touchback. No harm, no foul, but gahhh special teams issues again already (foreshawdowing). The UB offense goes with predictable run on first down and the infuriating run on 3rd and long that signals the coaching staff is not even going to attempt to play real football today. I watch the punt coverage team like it is a game of "Press Your Luck." No runback no runback no runback no runback fair catch phew! (FORESHADOWING). 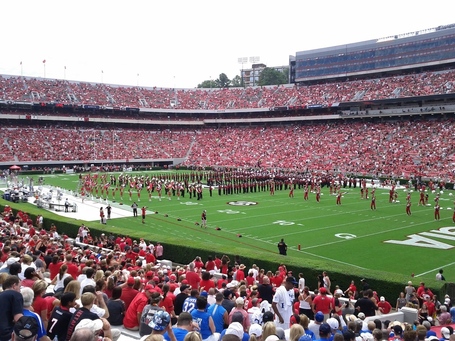 Georgia doesn't blow UB away, they have to nickel and dime down the field. UB forces a 3rd and long, and a defender almost sacks Murray, he escapes, and makes the defense pay for the miss by connecting on a long pass. Georgia scores a little later, but it feels OK, we are losing to the team in Red, but it feels like that team is more Ball State than Georgia. That feeling intensifies as the Bulls march down the field for a touchdown. Zordich hits Neutz on a play marked down at the one, the UB crowd goes wild. The play is reviewed, and as the video booth confirms the TD, Buffalo fans start celebrating before the call is made. The celebration and the humidity get to me, and I leave for water. I get to the concourse just in time to hear the rising volume of the crowd, a sound you never want to hear on the road. The roar crescendos into an almost sonic boom and is quickly followed by the marching band. Todd Gurley returned the kickoff for a touchdown, the fear of UB's suspect kick coverage is realized. After seeing the replay, Todd Gurley bacially just ran in a straight line past UB's defense because Todd Gurly is faster than everyone on UB's roster. 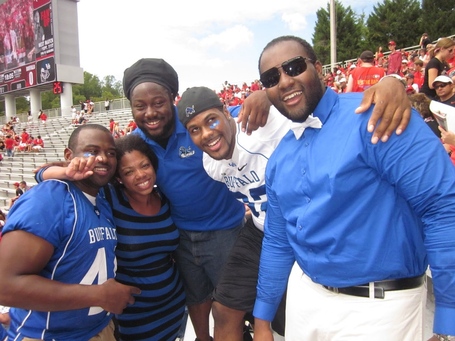 I get back to my seat thirty minutes later because the water lines were that long, and cash only, and the ATMs were out of service; Sanford Stadium gets a 0/10 for concessions in my book. The water was also between 3 and 4 dollars each, which should be criminal considering how hot it was during the game. They did have Chick Fil-A in stadium which is nice, I'd kill for some Duffs wings at UB stadium.

For the rest of the quarter I forget I am in Georgia, I am watching a real game, not the exhibition I expected. Georgia and UB go back and forth, until the Bulls get down to the six-yard line with less than a minute left in the half. Branden Oliver runs to the one with ten seconds and two downs remaining but no timeouts. I don't care if we get a score or not; in my eyes this is the time to find out what our team is about. If we power it in from the one right here, what team on our schedule will be able to stop us on 3rd or 4th and 1? UB does the technically correct thing, an incomplete pass, and a field goal, pulling the Bulls within 8 at the half. I'm slightly disappointed in Quinn, but upbeat because what a half of UB Football. 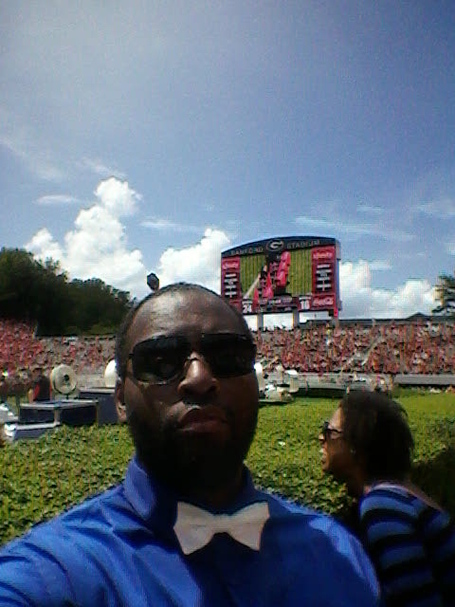 Halftime at the Hedges

The second half was a blur, the Bulls never got any closer to the Bulldogs, and UB seemed content with that. Down two scores, we could have pushed to make it a closer game, but that is easy to say from the stands. While battling a superior team, you tend to get fatigued.

With 8:27 to go in the game, I had enough of the heat, and left the game in search of water and shade. Todd Gurley like a watched pot, did nothing while I watched, but for the second time, he took my departure as his cue to be awesome, this time with a 55-yard touchdown run to seal the game. After the game, ESPN and Georgia fans anointed Gurley as their new savior, (this means he will be arrested within 8 months...prove me wrong Gurley, prove me wrong.) however I only saw him run seven times for 45 yards, which is relatively pedestrian, considering that Branden Oliver ran four times for 56 yards and a touchdown during one drive in the second quarter on Georgia's vaunted defense. Gurley's kick return was nice but as we know UB has special teams issues. I would have thought UB fans would be the ones over-reaching for some hope after this game, but by anointing a freshman running back as the next big thing in Athens, Georgia fans would be the ones left over-reaching for validation. 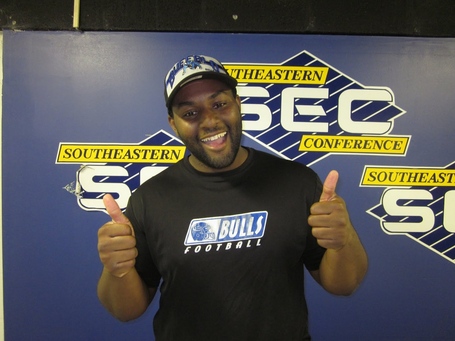 I left Rocky Top in love with Knoxville but utterly disgusted by our team and our coaching staff. I left Athens with no desire to ever return, but I am sold on this team and this coaching staff. We are finally moving in the right direction. Pairing our effort with Pitt's gaffe against Youngstown State, I am thinking UB could...no I dare not say it, but you know where I am going. I cannot remember being this happy after a loss, making this game my first career loss-ebration. 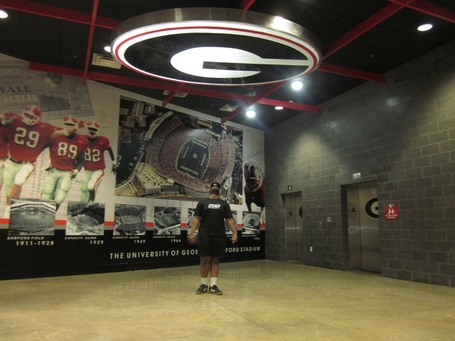 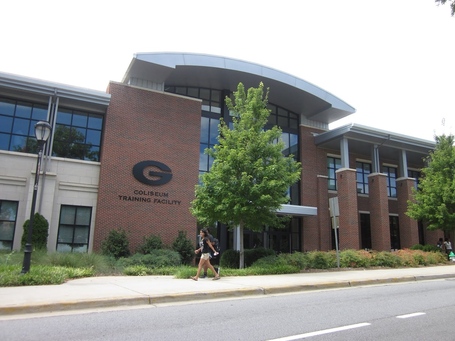