Share All sharing options for: UB Hockey: Keeping Live Hockey On The Ice 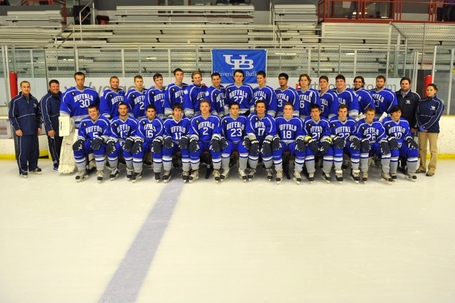 With the NHL lockout underway and looking like it may last throughout the season, Buffalo Sabres fans may be looking for another way to get their live hockey fix. College hockey could be just the thing to fill in that gap. It is a very inexpensive and family friendly alternative to a drive out to Rochester during the lockout to see a professional game. The University at Buffalo sports a ACHA D-1 team that plays out of the Northtowns Center in Amherst, After a stint in the ECHL, the team has recently moved into the NECHL, where they will compete with rival Niagara along with RIT, Ithaca, Syracuse, Binghamton, Cornell, Oswego, St. Bonnies, Cortland, and a select few other teams across the country.

This year the Bulls picked up 9 new players to play with the returning players from the 2011-12 season. Under head coach Sal Valvo; the Bulls went (12-16-3) last season. The coaching staff feels confident and very excited with the new players picked up in the off-season, as does Senior Captain Craig Meany.

"Ya know we're real excited about the new guys that came in this year," said Meany when asked about the new additions. "They seem like the best class of recruits to date and we're all hoping that we can string some wins together as a team. They're all good kids on and off the ice, and we can't wait to get the season started."

The Bulls kick off their season on Friday September 21st against Washington & Jefferson College. The game is set for 7:30 pm at the Northtowns Center in Amherst, and fans are encouraged to wear white. It is the first game of a two game set UB has against W&J, and the second game is the following night at the same time. The Bulls swept the season series with W&J last year 2-0. Both games will be broadcasted on WRUB, a student-run radio station.