99 for 99 takes a look at the 99 biggest moments in UB Football history during this season, the 99th Season of UB Football. These moments are not in any order, however the top 10 moments have been saved for last. 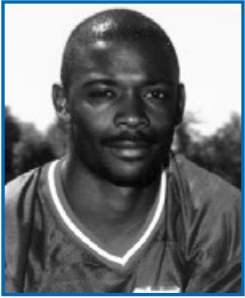 Since returning to football in 1977, UB always had a clear leader at running back. Then O.D. Underwood arrived and became UB's first thousand yard runner. After O.D however, Buffalo was left looking for its next great back. In 1988 Dave Rath ran for 682 yards, but then he graduated. That made way for Ray Hobson who ran for 215 yards in 1988, but exploded for 739 yards and 7 touchdowns in 1989. Behind Hobson was fullback John Hartman who ran for 211 yards in 1988 but only 79 yards in 1989. Finally in 1989, a freshman from Grover Cleveland High School showed glimpses of brillance, racking up 519 yards on 99 attempts.

In 1990, the Bulls had a three-headed running attack at their disposal, however Hobson would only gain 67 yards all season. Bell would shoulder the running load and against Westminster he had a breakout performance. Down 22-0, Buffalo needed some positive momentum. They got it when they converted a 3rd and 22 from the 47 with a 35-yard pass to John Hartman. Bell scored five plays later to cut the lead to 16. Unfortunately the Bulls couldn't build on that momentum; the extra point was blocked and returned by Westminster to extend their lead to 18.

In the third quarter still down 18, Buffalo was pinned back on their own 9-yard line. They would have to put together a long sustained drive and get a score to get back into the game, or just give it to Bell. They gave it to Bell and he ran 91-yards for a Touchdown, at the time, the second longest run in UB history, now third longest behind Ed Malanowics' 95-yard run in 1929 and James Starks' 92-yard run in 2007.

The lead down to 12, Buffalo had the momentum they needed to turn the game, and the defense parleyed the momentum into a third-and-long. UB got the stop, but a flag came down for pass interference. Westminster got the first down and a touchdown, and they won the game, 38-12.

Bell scored both UB touchdowns and would go on to lead the team in scoring as a Sophomore. However, he only carried for 4.1 yards per carry. Hartman set a UB record with 6.1 yards per carry for the season and lead UB in rushing with 662 yards in his final season as a Bull.

After a few years of running back by committee, Alan Bell established himself as an elite UB Running Back. UB ran all over Duquesne, totaling 531 rushing yards and 9.3 yards per attempt, on their way to a 49-0 win. Alan Bell led the charge, setting the UB record for yards in a single game with 266 on 30 carries. The record for yards in a game (1977-present) changed hands quickly. First Dane Hightower ran for 188 in 1985. A year later, O.D. Underwood shattered that record with a 232-yard game. O.D. only held the record for 5 years before Bell took the title. Since then, no one has eclipsed Bell, the record has stood for 21 years.

Bell broke the record in impressive fashion, with a 47-yard Touchdown run. He left the game in the fourth quarter, with 206-yards rushing. When the coaching staff was made aware how close Bell was to the record, they put him back in the game, he quickly broke off the 47-yard TD run.

Bell not only bested O.D.'s single-game mark, this game put Bell in position to become UB's second thousand yard runner, finishing the season with 1017 yards, solidifying his place as one of the greatest backs in UB history. Bell finished his career first in career rushing yards with 3,022, (now 3rd), second in rushing touchdowns with 26, (now 4th) and first in 100-yard games with 10, (now 3rd). Bell was also a prolific return man and he finished first in all-purpose yards with 4,747, (now 3rd) and first in career scoring with 184 points, (now 3rd). In 2001, Alan Bell was elected into the UB Athletic Hall of Fame.