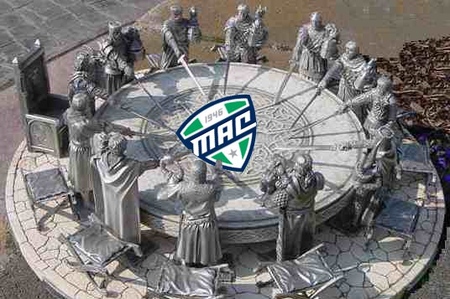 Were going to start running out of chairs soon

END_OF_DOCUMENT_TOKEN_TO_BE_REPLACED

Time to hand the keys over to one of the new Blogs.

Maroon Musket does a fantastic job covering all things UMass. They do an especially good job with their recruiting beat.

Don't forget to check out all the MAC blogs on the right. While only a hand full are "officially" taking part most will be throwing up their own answers.

1. MAC schools have pulled off some big upsets during the past few years - most recently Ohio over Penn State (whether or not that is actually an upset is surely debatable). In a perfect world, what would be the most enjoyable upset for your school and why?

For what it's worth I would hold off on calling the Penn State win "huge". Sure the Lions could pull out of this tail spin but they could just as easily be a three win team this season.

In my experience pounding 12th ranked Ball State into the ground back in 2008 was pretty exciting. I just wanted to put it out there for the benefit of all the Cardinal fans sitting at the table.

But after two years of gutter ball I suppose I would take any win over a ranked team. Be they an arrogant conference mate expecting an easy win, a perennial power, or a regional rival, UB would benefit from the win.

Being in upstate New York I beleive beating Syracuse would be a huge step forward for the Buffalo football program.

2. MAC teams typically play one or two "pay-to-play" games where they step into a BCS team's stadium and are essentially expected to lose. Do you think these games are beneficial beyond being a financial boost? Do they help get teams ready for the MAC slate, or are they just opportunities for injuries?

Pay-to-Play is batter than bringing in a cupcake every year. I mean I'll take a slightly competitive game, and huge check, to play and SEC school than writing a much smaller check to bring in a middling FCS team.

There are exceptions to this. Temple and Villinaova make sense, as would a Buffalo series with Stony Brook or Albany. But bringing in Morgan State, Gardner-Webb, Rhode Island?

But if you're a mid major, and you will lose more than two games in a season you might as well take a chance at shaking the world, and getting a nice hefty check.

Buffalo, under Turner Gill, went after the recruiting hot beds. Now with Quinn it's all about Ohio and Michigan. I'm guessing that the experience for Mid Majors is typically you go after the states your coach knows best, and perhaps the state you're in.

Quinn spent the past several years beefing up UB's line. That's where the biggest need was when he came in so that's where most of the effort went.