It's not been a good couple games for the favorites:

By the narrowest of margins team Old Willy edged out Dibble's Dazzlers meaning there is just one more game in round 1. "Hofher’s Heroes" versus "Chi Town" 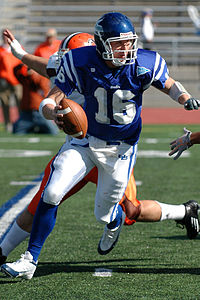 The Heroes are wearing what we used to call "the loyal order of Buffalo" uniforms and what Chi-Town has dubbed "The Nike Swoosh Bull horn helmets 2001-2005". The team is named after Jim Hofher who was not able to put a winning team on the field. Hofher did, however, bring Drew Willie, James Starks, Trevor Scott, and several other eventual NFL players to Buffalo. The Bulls won the 2008 championship on the backs of players Hofher brought to UB.

The Heroes line up Chad Salisbury behind center. He will be tossing the rock to Jamie Gasparre, Doc smith, and a linebacker playing for New England named Trevor Scott.

With the first pick of the draft he loaded his backfield with James Starks.

He took the defense from 1983 and a kicker from the mid 90's named Mark Mozrall.

It's a very young team. Conrad picked just one player from the pre modern era, as his flex back. That player, Lou Corrie, takes the field for Conrad.

I’m facing a formidable team, my favorites for runner up of the whole league, runner up yes, because the 2008 defense while opportunistic had a fatal flaw. They could not stop a dynamic running threat, and they fared even worse when the running threat could throw. See, Hofher’s hero’s are not only stacked, they're versatile. My team is the Bumblebee of the transformers…In one incarnation they are a sleek and powerful Camaro, in another a deadly outerspace robot.

My captain today is "Lockport" Lou Corriere. UB’s Front page star of the 40’s. His stats are not readily available, his passing stats are not readily available but he often threw. He threw a 25 yard TD pass and scored on a 35 yard run in 1942 vs RPI. He also scored 9 times in that fabled Hobart game: 6 TD runs, 2 TD passes and an 84-yard interception return that was called back on offsides.

2008’s defense could not contain Lesean Mccoy, couldn’t stop Dan Lefevour, got trampled by Julian Edelman, and let Donald Brown run wild and you know what? They cannot stop Lockport Lou. Chitown has a lot of offensive fire power, but Hofher's heroes will dictate the pace with the run game, and when they least expect it, Lockport Lou will throw, for big yardage and game deciding touchdowns. 1-0 baby and #1 in the UB polls

He is facing off against Chi Town who's uniforms were the 1997 one year wonder.

Kicking for Chi Town is "The Leg" Gerald Carlson who has the second longest field goal in UB History.

Scott will waste no time bringing the offense in week 1

I pick Willy for this week because there is only one way to take down the greatest RB in UB history, and that is with the greatest QB.

James Starks is going to get his yards in this matchup, but if it becomes a shootout, I will take Willy and my receiver core over Starks and a TE who isn't even playing his best position. If Starks is gonna pound the ball with a DE blocking for him, I'll trust my turnover forcing defense to stop him in his tracks.

Drew Willy, across the board, has the best stats at the QB position in UB history, and I don't see the opponent doing anything to stop it.