Game one is in the Books and "Offy's Army" led by Jessie Rack pulled a huge upset over "We Are" who were captained by Gordon Bukaty.

"Old Willie" looks sharp in those 1995 uniforms. The Mid 90's had a few great years and it Seems BCBull is trying to bring those back.

With Cliff Scott (1995) behind center the Willies hope to dish the ball often to Naaman Roosevelt (2009), Alex Neutz, and tight end Chad Upshaw.

Defensively the team relies on the 1947 unit. But they lack a kicker because Matt seems this think that

The Willie's (grounds keeper Willie keeps running through my head) will lead off the season with Cliff Scott.

I'm going to use Cliff Scott for week one. Cliff was the qb for the Bulls in the early nineties and it doesn't take a ton of time in the record books to find his name on all sorts of lists. Cliff was an offensive machine during his four seasons, throwing for 43 touchdowns and running for 20 more in 42 starts between 91 and 94.

Anyone who remembers Cliff (or has seen the record books) knows that all the touchdowns came with a hefty price... Lots of turnovers. 58 interceptions in four years is... Not great. Fortunately for Cliff and our team, this week we're facing the 1898 defense, who isn't even aware that the forward pass exists or is legal. That defense gave up almost no points all season, but their pass defense wasn't tested at all, and they won't capitalize on the wild throws like 1990s defenses. All it takes to beat a rugby scrum is a little toss over the top from one of the most prolific passers in UB history, and we're cruising to a week one victory. 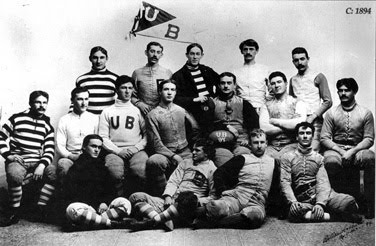 "Dibbles Dazzlers" are old school, very old school. Since the helmet started its evolution in the 1890's the Dazzlers have decided to go all the way back to the days of C.W. Dibble.

Despite the homage to the early days of UB Dave has put together one of the most modern teams.

His marquee player is Branden Oliver and he reaches all the way back to 2010 for Ike Nduka. His receivers are Brett Hamlin and Drew Haddadd who will be joined by Tight End Chris Behan. His Kicker is AJ Principie

The only pre modern skill player on the roster is Joe Kubisty, who led the Bulls in 1956. For his defense 2010 reaches all the way back to 1898. That defense led UB's only undefeated team of all time.

The Dazzlers waste no time this week as the lead with Branden Oliver:

I often dream what it must have been like to be able to see Poison live. Great musicians with deep lyrics, Oscar type music videos, and a keen eye for fashion. It is a shame that Poison was over shadowed by Warrant. And really "Heaven" isn't enough for you, there's always a little "Cherry Pie" to go along with it on the side. Power ballads! Incredible Stadium anthems! And guest spots from the guys in Danger Danger! I mean did you really know at the time that you were seeing something very special? And their staying power! Warrant Rocked.

So what does this have to do with UB Fantasy Football? Well, Bo Oliver is my Poison. And Potts is my Warrant. It amazes me to this day that if Warrant was playing at Mister Goodbar in front of 30 people and Poisons was playing at a sold out Kleinhans, that a select group would say that Warrant is way better.


So where am I going with this. Great question, hopefully somewhere but I am not sure. Oliver will go down as the best running back to ever come from the University at Buffalo. I know what you are thinking, James Starks. However, Oliver surpassed NFL running back James Starks for the Bulls single season record for most carries, rushing yards and all-purpose yards. He also became the first Bulls running back to gain at least 100 yards eight times in a season. BAM Warrant and Starks Lovers! Bo did this without a Naaman Roosevelt of Jani Lane, or Ernest Jackson or Erik Turner, or a Brett Hamlin or Jeffry Dixon threat. Hell, Pitt just let anyone not named Neutz or Joey Allen alone, isn't going to catch or rock the hell out of it. He also did this without UB’s only real QB threat in Willy or Steven Sweet. Teams knew Buffalo was going to run and Bo still did. He is the best player on the field for either team all season. Look at his stats last season.

Branden Oliver Named to 2012 Doak Walker Watch List, Maxwell Award. Nuff said. Guys who are smarter than me who know football see the Poison type power in this young man.

To end the once and for all, with Branden in the backfield I see Nothin’ But a Good Time. Your Mama Don’t Dance but you will see Bo Dance all around defenders. Bo gives me Something to Believe in. So Tell me Why some still call for Potts. Bo Cry Tough, he ain’t soft. Bo has given (Flesh & Blood) Sacrifice to this team. When Bo makes it to the NFL, Life Goes On! When I go to the stadium, just give Bo the Ball, I Want Action. Watching Bo run is like a Ride on the Wind. The D can try to Stand but Bo will throw them down. Bo I Won’t Forget You. I see many Fallen Angels in Bo’s wake. Have you ever seen Bo, he is no Unskinny Bop. I like that Graham W is going to Talk Dirty to Me saying Bo will have 2,000 yards this year. To have such a great player on such a underperforming team last year, well, Every Rose Has It’s Thorn. I am not touching Sexual Thing! And that Ladies and Gentleman is the greatest Hits of Poison and Bo so far! Bo just like Poison, the best is yet to come. Let’s see who is Dirty Rotten Filthy Stinking Rich in the long run?

So there are your choices UB Nation:

Which Team made a better case for their squads superiority? Vote on any criteria you wish!