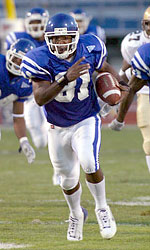 The 2002 Bulls traveled to Peden Stadium at 1-3. Ohio had lost ten straight games, including a 44-0 loss at UB Stadium in 2001. Determined to end the losing streak, Ohio took a 21-3 lead into halftime. 2nd year Coach Jim Hofher challenged his team to keep fighting and senior wideout Andre Forde did just that. Randall Secky threw a six yard touchdown pass to fullback Ramon Guzman, but the extra point was missed, cutting the lead to 21-9. Ohio scored to extend the lead to 28-9, but UB quickly answered with an Aaron Leeper touchdown run. UB ended the 3rd quarter down 28-16.

Ohio kicked a field goal on the first play of the fouth quarter, extending the Ohio lead to 15 points. The Bulls drove down the field and Secky found Forde for a 6 yard touchdown. The two-point conversion failed, keeping Buffalo 2 possessions behind. After forcing a Bobcat punt, Secky again hit Forde, this time for a 60-yard touchdown pass, bringing Buffalo within 2 points at 31-29. Ohio’s fourth quarter freefall continued on the following drive as Ohio quarterback Dontrell Jackson fumbled and UB’s Lamar Wilcher recovered. With four minutes remaining, Dallas Pelz hit a 29 yard field goal to complete the comeback, giving UB the 32-31 lead.

Despite the loss, Andre Forde had a legendary game. He brought in 12 receptions which tied for 2nd most in UB history (with Gary Quatrani) behind Chaz Ahmed’s 13 receptions. Forde’s 202 yards also stand as the 2nd best receiving day in Buffalo history behind Joe D’Amico’s 218 yards in 1981. D’Amico and Forde are the only receivers to gain 200 yards receiving in UB history.

*Editors note: I've been to Peden Stadium twice, (2004, 2006) I loathe that place. The visiting locker room is about 10 feet by 15 feet, with a ceiling about 6 feet high. Hot water, nope. The fans are awful. I hate the Marching 110's guts. I despise the stupid OHIO chant. It's also an otherwise beautiful campus, which annoys me as well, I'd feel better if it was all-around awful and football was all they had. Although it occured a year before I attended UB, I'd like to retroactively thank Andre Forde for putting the scare into the Bobcats in 2002. Thunder Through!