Share All sharing options for: 99 for 99 - #64: Craig Guest Tackles Anything That Moves 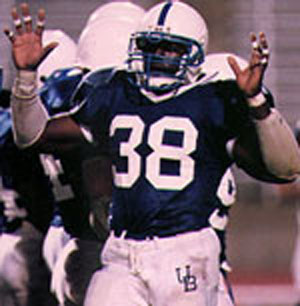 In 1995, Guest set a UB record with 161 total tackles. He recorded 15 tackles for a loss, a UB record of 84 assisted tackles and a UB record of 77 solo tackles, (a record he would break the following year with 80.) Guest had 18 tackles in the Lafeyette game and 19 tackles in the Central State game. His biggest game however came against Maine. Although UB lost the game, Guest set 3 UB records that stand today: 12 assisted tackles, 17 solo tackles and 29 total tackles.

Guest and (Pete) Conley anchored the UB defense from the linebacker spot, recording 306 tackles together in '95. However UB’s offense was never in sync, scoring under 10 points 5 times and under 20 points 8 times. Despite the indivual accolades of the 1995 season, Guest preferred team victories. He regarded the 8-3 ’96 season and being named captain by his teammates as his greatest accomplishments at UB.